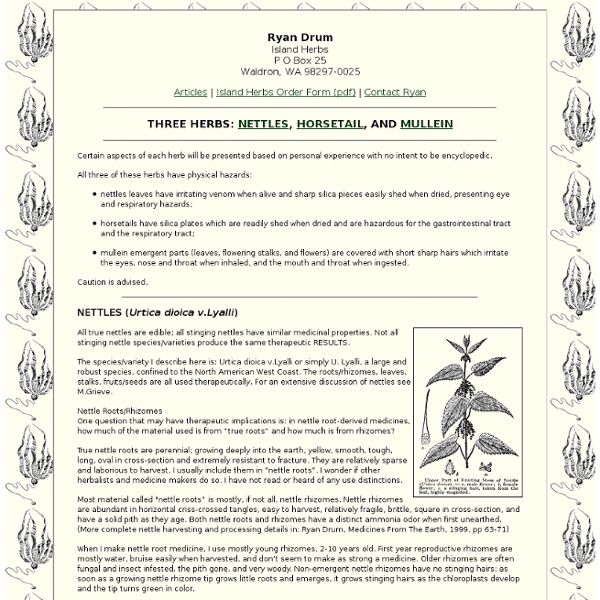 P O Box 25, Waldron, WA 98297-0025 Articles | 2014 Workshops | Island Herbs Order Form (pdf) | Contact Ryan Certain aspects of each herb will be presented based on personal experience with no intent to be encyclopedic. All three of these herbs have physical hazards: nettles leaves have irritating venom when alive and sharp silica pieces easily shed when dried, presenting eye and respiratory hazards; horsetails have silica plates which are readily shed when dried and are hazardous for the gastrointestinal tract and the respiratory tract; mullein emergent parts (leaves, flowering stalks, and flowers) are covered with short sharp hairs which irritate the eyes, nose and throat when inhaled, and the mouth and throat when ingested. Caution is advised. NETTLES (Urtica dioica v.Lyalli) All true nettles are edible; all stinging nettles have similar medicinal properties. The species/variety I describe here is: Urtica dioica v.Lyalli or simply U. I wondered what species of nettles she had gotten.

How to Make Medicinal Vinegars & Oxymels Medicinal vinegars (Vinegar Extracts) have been around since ancient times, and were an excellent way to preserve and dispense herbs before distilled spirits were known about. While the advantages of using vodka or brandy to make your herbal tinctures are many – including greater potency and longer shelf life, there are those who wish to avoid alcohol for personal reasons or due to the higher cost, making vinegar extracts ideal for them to create. Vinegar extracts (also known as “aceta”) are weaker than alcohol based tinctures, so the required dose is higher. And, while vinegar won’t draw out as many of the beneficial components of an herb that alcohol will, it does excel at drawing minerals and vitamins from a plant. Add those extra nutrients to the already established benefits of apple cider vinegar and you have a very acceptable option for your herbal remedies toolbox. Making a Vinegar Extract:

Tips for Growing Dandelion COMMON NAMES: Dandelion LATIN NAME: Taraxacum officinale HISTORY: Dandelions are believed to be some of the oldest plants on the planet. Herb List with Pictures Join Over 1,875,000 Fans On Facebook! Homepage Blog Individual Herbs Growing Yarrow Plant: How To Grow Yarrow By Heather Rhoades While often sold as a flowering perennial, yarrow plant (Achillea millefolium) is actually an herb. Whether you decide to grow yarrow in your flower beds or in your herb garden, it is still a lovely addition to make to your yard. Yarrow care is so easy that the plant is virtually care-free.

The Art of the Bath Ritual. Via Ruth Randallon Sep 23, 2014 There I was, breathing, meditating, trying to find the space between thoughts that brings the beginning of wisdom. Or so I had read. Suddenly I hear, “Do you know what that sound is, highness? Those are the shrieking eels!” Aw, snap! 20 of the Best Antiviral and Antibacterial Herbs and Plants Ever! Photo credit: bigstock.com Depending on your age, your mother or grandmother most likely used some type of herb or plants to help heal you when you were sick without you realizing it, or perhaps you just didn’t appreciate it at the time. For many of us, it’s not until we have our own children that we realize that we don’t want to put chemicals and other toxic things into those precious little bodies.

Healthy herbs nutrition facts and the health benefits of herbs Healthy herbs have long held an important place in our wellness. Prized since ancient times, and today we even more depend on them to purify our body, mind, and soul! Of course, we all use herbal parts in our daily lives, one way or the other, whether for their fragrance, for their healing power, or in lovely recipes. Herbal benefits are many; be it for spiritual reasons or to spice up your taste buds, or as a home remedy for ailments like cold, or sore throat... herbs are handy for each need! Although, the herbs been in use in our diet since antiquity, only recently have taken the center-stage of nutrition scientific world for their potential health benefiting and detoxification properties. Here is the complete list of healthy herbs with their health benefits, nutrition value, culinary and medicinal uses:

1000-Year-Old Recipe Can Kill Antibiotic-Resistant Superbugs Marco Torres, Prevent DiseaseWaking Times Modern medicine has failed miserably at treating antibiotic resistant superbugs. Widespread use of antibiotics in farming as well as antibacterial agents have promoted the growth of dangerous superbugs for decades which could leave millions vulnerable to untreatable illness within a generation. A recipe for an eye salve found in the British Library in a 10th-century book of Anglo-Saxon medical advice may hold the natural solution to which conventional medicine has not been able to address. While infections are becoming increasingly difficult to beat, no new class of antibiotic has been discovered since 1987.

'Miracle Grass' Encourages Longevity While Dispelling Disease By Carolanne Wright Contributing Writer for Wake Up World More potent than ginseng, jiaogulan is a powerful antidote to aging, cancer, cardiovascular disease, stress and fatigue. It even helps to maintain proper weight. Known as an immortality elixir, this herb has been used for centuries throughout Asia. The Healing Song - Alternative Treatment for Illness and Addiction Home > The Healing Song – Alternative Treatment for Illness and Addiction Waking Times Documentary Film - Everything in the Universe moves, resonates and vibrates at its own frequency and generates its own sound. Sound has the power to influence our physical and emotional states like no other source of expression.

Usnea - an herbal remedy for strep throat and staph infections. Usnea is a lichen rather than a plant. Lichens are unusual combinations of algae and fungi that work together as a single organism. It can be found growing on old trees in the cool damp of the forest. Power-Packed Purslane Common in our yards but little known in the North American kitchen, purslane is both delicious and exceptionally nutritious. Common purslane (Portulaca oleracea) — also known as duckweed, fatweed, pursley, pussley, verdolagas and wild portulaca — is the most frequently reported “weed” species in the world. It can grow anywhere that has at least a two-month growing season. Until recently, most research on purslane has focused on its eradication. A frequently overlooked approach to controlling this weed is to eat it!