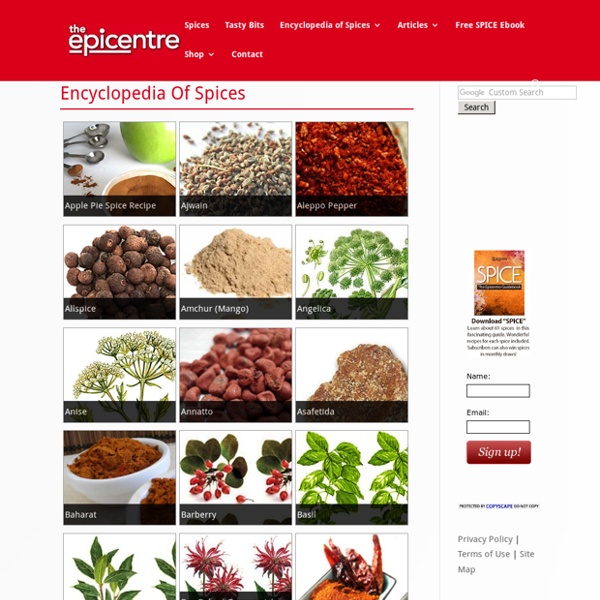 Spice Advice – how to make the most of spices, which spices to use with particular foods, when to add them, grinding, storage and more. Herbs and Spices Fight Disease — Most of us look at spices as a way to perk up the plate but are you aware of their potential to fight disease? Look here for some recent findings. All about Vanilla – and then some… history, curing, varieties, vanilla extract, essence, powder – even vanilla salt. How to cook with vanilla. including top 10 vanilla recipes! Cooking with Thyme – Getting the most of thyme in your cooking – including varieties of thyme, preparation, infusions, fresh vs. dried and many suggested uses for cooking with thyme.

Solar Cookers The 3 types of Solar Cooker... Source The Panel Solar Cooker uses reflective panels to focus sunlight onto a pot. These work best in tropical climates or in the warmer months when wind and heat loss are not an issue. Easy Chicken Burritos Chicken Burritos I made a roasted chicken over the weekend, and after enjoying it on the first day, I’ve been trying to come up with a more innovative recipe than just a simple sandwich. When I spotted some leftover tortillas in the fridge, I instantly thought of finally making my own homemade burritos. One of my embarrassing, guilty pleasures are those cheap, frozen burritos.

Spicy Asian Mustard 8 Gram Portion Control (PC) Packet 500/CS Bursting with a tangy kick, this spicy Asian mustard comes in perfectly-portioned packets to add just the right amount of flavor to your customer’s dishes. These 8 gram packets are ideal for any restaurant, diner, convenience store, cafeteria, or take-out station and offer a quick and easy way to enhance profitable menu items. The perfect complement for Asian cuisine, this spicy mustard deliciously enhances the flavor of poultry, fish and meat dishes like classic Teriyaki beef, coating these traditional dishes in a thick and savory sauce. This bold sauce, spiced with peppery turmeric, makes for a simple and delightful addition to your menu, and will ultimately help lower costs by controlling portion size.

Drunken Irish Stew It’s freezing here in Phoenix! I woke up this morning and it was 40 degrees! I didn’t know what to do with myself; I can barely get out of bed! It’s nice, though, being able to wear my coats and boots without feeling like a complete idiot. That’s why I figured that I had better make some stew while the weather lasts, as I’m sure it will be back in the 80s in a few weeks. Quinoa Nutrition: Are You Curious About Quinoa? By Dr. Mercola Eating a bowl of quinoa a day may lower your risk of premature death from diseases like cancer, heart disease, respiratory disease, and diabetes by 17 percent.

Chicken and Bean Burrito Verde Recipe : Ellie Krieger Directions Heat 2 teaspoons of the oil in a medium skillet. Add the onion and cook until translucent, about 3 minutes. Add the garlic and cumin and cook for 30 seconds more. Add the beans, broth and 1/2 teaspoon of salt and cook until warmed through, about 2 minutes. Transfer the bean mixture to the small bowl of a food processor and process until smooth.

Dates & Palm Trees - Saudi Arabia - Facts Types & Nutrition Historical facts Saudi Arabia is the home land of the Date Palm Tree. With more than 10000 years of age it is one of the oldest trees in the world. Many nations transferred the palm trees from Saudi Arabia (used to be called Arabian Peninsula) to other places in the world after they became amused by its charming beauty and its endless generosity. For example, the great Alexander was the first to introduce palm trees to Pakistan. Annatto Open fruit of the achiote tree (Bixa orellana), showing the seeds from which annatto is extracted; photographed in Campinas, Brazil (January 2009). Annatto, sometimes called roucou or achiote, is derived from the seeds of the achiote trees of tropical and subtropical regions around the world. The seeds are sourced to produce a carotenoid-based yellow to orange food coloring and flavor.

Christmas Rocky Road Heavenly Hash ~ Cajun Chef Ryan On my daily commute to and from work, I typically listen to NPR radio for the majority of my news fix, which makes up for the lack of getting the daily print newspaper, and I rarely watch the news on the tele anymore either. One of the NPR treats that I enjoy is the food features that I happen to catch including updates from Nigella Lawson and the Kitchen Sisters, among others they will broadcast. On November 30, 2009, NPR featured Nigella promoting her Nigella Christmas cookbook and in particular, I was fascinated with her new take on a rocky road dessert treat. The original recipe can be found at the story titled: Nigella Offers Simple Recipes For Holiday Cheer. Banana Upside Down Muffins ~ Recipes by Amanda&#039;s Cookin Quite a while ago I received a cookbook called Sweet!: From Agave to Turbinado, Home Baking with Every Kind of Natural Sugar and Sweetener by Mani Niall.