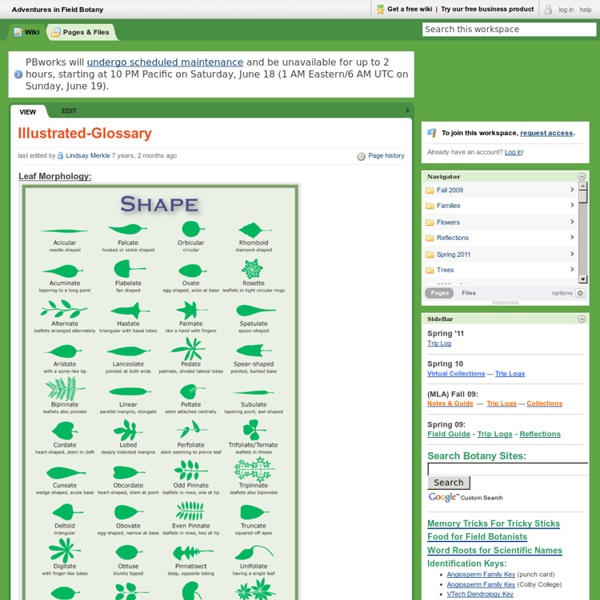 Leaf Morphology: Phyllode/ Cladode: modifyed stems that act as leaves. Ensiform: leaves sharp edges, taper into a slender point (fern) Stellate: hairs come up like fingers. Looks like cluster of hair. Peltate: "petiole joins to the center" in leaves. Glossary of Terms: WHORLED - more than two (2) opposite leaves. OPPOSITE - leaf nodes are on opposite sides of twig. ALTERNATE - leaf nodes alternate in pattern along branch. DECUSSATE - Arranged on a stem in opposite pairs at right angles to those above or below, resulting in vertical rows of leaves. PALMATE - consisting of leaflets or lobes radiating from the base of the leaf. CAPSULE - a hollow dry fruit with 3+ locules (chambers) Dehiscent = splits open to release the seed. Indehiscent: remaining closed, do not split open at maturity. Capsule Types- Dehiscent: Capsule breaks to release fruit Indehiscent: This is a drupe, no hard capsule that is made to split open A walnut is a drupe fruit. OVATE (ovoid) OBOVATE (obovoid) ELLIPTICAL Root Index

List of British words not widely used in the United States Wikipedia glossary This is a list of British words not widely used in the United States. In Canada, New Zealand, India, South Africa, and Australia, some of the British terms listed are used, although another usage is often preferred. Words with specific British English meanings that have different meanings in American and/or additional meanings common to both languages (e.g. pants, cot) are to be found at List of words having different meanings in American and British English. When such words are herein used or referenced, they are marked with the flag [DM] (different meaning).Asterisks (*) denote words and meanings having appreciable (that is, not occasional) currency in American English, but are nonetheless notable for their relatively greater frequency in British speech and writing.British English spelling is consistently used throughout the article, except when explicitly referencing American terms. 0–9[edit] Pronounced "nine nine nine", the UK Emergency phone number[1] (US:911)[2] bap

Local Directory Listings for Medical Practices with MD Connect Connect Your Medical Practice To the Top Local Directories With MD ConnectTM, our Local Directory Listing service enables your medical practice to be visible on over 40 of the leading directories, local website search engines and mapping applications. Showcase your practice and capture more traffic to more than 150 million people each month. Allow Patients To Find Your Medical Practice Your potential patients are utilizing the internet to research and identify medical practices within their communities; it is important that your practice is visible when these patients are conducting their searches. Our local directory listing service gives you more control over your listings almost everywhere online and helps you stand out wherever patients may be searching for practices like yours. Pricing Contact us today with any questions. Don't be invisible when your patients are searching for you!

Cruftbox When Intelligentsia Coffee opened in Pasadena recently, I was intrigued the lasagna cupcakes they served. The cupcakes are made by Heirloom LA, a catering business. About the size of a muffin, a single lasagna cupcake was a delicious meal. After seeing how much my daughter enjoyed them (she ate my entire cupcake and I had to order a second one), I decided I had to try making them at home. After a bit of research, here is my method. The girls love them and take them to school as lunch. The ingredients are fairly simple. Spray or wipe the cupcake tin with olive oil for prevent sticking and add a little flavor. Once you filled in the first layer, gently press another wrapper in, forming another cup. Once you've placed the second wrapper, repeat the filling as you see fit. A bit of Mozzarella cheese on top of it all. I baked them for 20 minutes at 375° F and then come out perfectly browned. You can do pretty much anything you want as filling from more meats to a vegan version.

20 Places to Find Free Books Online | Northern Cheapskate The following is a guest post by Bailey Harris. There are many different sites offer free books online. Within minutes, you could find enough reading material in the form of e-books and audio books to keep you and your family entertained for months, if not years. The following sites provide free books that can be enjoyed online, downloaded to your computer, or transferred to an e-reader or MP3 player. E-books Google Books – Google Books is a great place to find free classic books in the public domain. Read Print – Read Print makes thousands of novels, poems, and stories freely available online. Online Books Page – This University of Pennsylvania website lists over 800,000 books that can be read for free online. Project Gutenberg – Project Gutenberg was the first site to provide free e-books online and is still among the most popular. Bibliomania – Bibliomania offers more than 2,000 free classic books, plays, poems, and short stories. Audio Books Children’s Books

Constrictor knot History[edit] First called "constrictor knot" in Clifford Ashley's 1944 work The Ashley Book of Knots, this knot likely dates back much further.[5] Although Ashley seemed to imply that he had invented the constrictor knot over 25 years before publishing The Ashley Book of Knots,[1] research indicates that he was not its originator.[6] Ashley's publication of the knot did bring it to wider attention.[7] Although the description is not entirely without ambiguity, the constrictor knot is thought to have appeared under the name "gunner's knot" in the 1866 work The Book of Knots,[8][9] written under the pseudonym Tom Bowling.[10] in relation to the clove hitch, which he illustrated and called the "builder's knot". He wrote, "The Gunner's knot (of which we do not give a diagram) only differs from the builder's knot, by the ends of the cords being simply knotted before being brought from under the loop which crosses them Tying[edit] The method shown below is the most basic way to tie the knot.

Former "Seasteaders" Come Ashore To Start Libertarian Utopias In Honduran Jungle The seasteader-in-chief is headed ashore. Patri Friedman (that’s Milton Friedman's grandson to you), who stepped down as the chief executive of the Peter Thiel-backed Seasteading Institute in August, has resurfaced as the CEO of a new for-profit enterprise named Future Cities Development Inc., which aims to create new cities from scratch (on land this time) governed by "cutting-edge legal systems." The startup may have found its first taker in Honduras, whose government amended its constitution in January to permit the creation of special autonomous zones exempt from local and federal laws. Future Cities has signed a non-binding memorandum of understanding to build a city in one such zone starting next year. Seasteading, i.e. the creation of sovereign nations floating offshore, is enshrined in libertarian thought as an end-run around the constraints of stodgy nation-states. Instead of seasteading, Future Cities is modeling itself on “charter cities.”