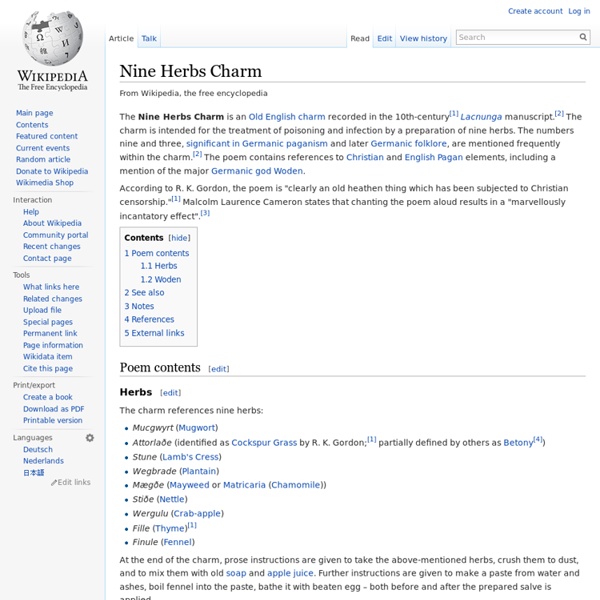 The Nine Herbs Charm is an Old English charm recorded in the 10th-century[1] Lacnunga manuscript.[2] The charm is intended for the treatment of poisoning and infection by a preparation of nine herbs. The numbers nine and three, significant in Germanic paganism and later Germanic folklore, are mentioned frequently within the charm.[2] The poem contains references to Christian and English Pagan elements, including a mention of the major Germanic god Woden. According to R. K. Gordon, the poem is "clearly an old heathen thing which has been subjected to Christian censorship. Poem contents[edit] Herbs[edit] The charm references nine herbs: Mucgwyrt (Mugwort)Attorlaðe (identified as Cockspur Grass by R. At the end of the charm, prose instructions are given to take the above-mentioned herbs, crush them to dust, and to mix them with old soap and apple juice. Woden[edit] A snake came crawling, it bit a man. See also[edit] Notes[edit] References[edit] External links[edit] Related:  hedge witch

Hearth and Home Witchery Imbolg Crafts and Activities for Children There are so many activities to do with your young ones at Oimelc, many of which can also be done at the Spring Equinox. Older children can help make candles (there are lots of kits out there to make it easier) and candle holders. Younger children can make "candles" from toilet paper rolls and construction paper. If you choose to start your Spring Cleaning, a small brush broom and dustpan, a clean cloth to help wipe down cabinet doors or dust tables or child size cleaning equipment for those little "can I help?" little ones. Make a Priapic Wand ~Reading~ Meagan's Imbolc by Kathryn Dyer The Story of Imbolc by Rachel Walker Making Butter In a clean jar with a screw on top pour in heavy or whipping cream. Paper Brigid's Crown An Imbolc Project By Wendy Sheridan (This is especially appropriate for young girls, since this is the holiday for the return of the maiden). You will need: From: Wendy Sheridan Source:unknown

Earth Witchery Top ten ancient Irish charms and spells Celebrate all things mysterious and magical on "Occult Day" with these ancient Irish rituals. Photo by: Getty Images/iStockphoto There are many practicing witches and druids in Ireland today who believe in ancient traditions and folk magic. We’ve put together a list of ancient charms and spells based on this Irish magic. Whether you are seeking a spell for love, luck, or healing, emotional charms, or even potency, these charms and spells will have something for you. 1. On the night of a full moon, walk to a spot beneath your beloved's bedroom window. The night breeze is believed to have a guardian who is compassionate toward requests from mortals between midnight and 1 am (the witching hour). 2. Place two keys in a sieve, cross ways. 3. You will be damn lucky with this one. Light the candle and loop the string in through the trinket and tie it. “A candle flickers, this trinket I pass, good energy and fortune come to me, wealth, knowledge, influence, energy. 4. 5. 6. 7. 8. 9. 10.

Burning Incense Is Psychoactive: New Class Of Antidepressants Might Be Right Under Our Noses -- ScienceDaily Religious leaders have contended for millennia that burning incense is good for the soul. Now, biologists have learned that it is good for our brains too. An international team of scientists, including researchers from Johns Hopkins University and the Hebrew University in Jerusalem, describe how burning frankincense (resin from the Boswellia plant) activates poorly understood ion channels in the brain to alleviate anxiety or depression. "In spite of information stemming from ancient texts, constituents of Bosweilla had not been investigated for psychoactivity," said Raphael Mechoulam, one of the research study's co-authors. To determine incense's psychoactive effects, the researchers administered incensole acetate to mice. According to the National Institutes of Health, major depressive disorder is the leading cause of disability in the United States for people ages 15--44, affecting approximately 14.8 million American adults.

The Hedge Wife: Magical Herbalism Part 1 Witchcraft and herbalism go hand in hand and have done so for centuries. In the past, witches were called wise women or wise men and were often the only people their neighbors could go to for healing. Doctors were sparse and so expensive only gentry could afford them or...there were none to be found in general. Today, many witches are returning to their roots so to speak and looking to find a connection to the earth by healing themselves and those around them with herbs and plants. I wanted to do a series of posts to collect data online into one place for easier research not only for myself but for others looking. The following are site and blogs that provide magical herbal information. Wicca.com has a great reference list form A-Z of herbs and their magical properties. Witch of Forest Grove has a great series of posts called Weeds for Witches that include Dandelion and Clover, two of my favorite weeds. I hope you find many blessings in the links given.

The Magical Herbalist’s Mini Guide to Popular Herbs, Plants, Fruits, Flowers & Their Magical Properties… | The Magickal Herbalist The herbs listed below that are marked with a * next to it, should never be consumed without the correct & legal amount made & distributed by that of a qualified herbalist. They are extremely dangerous herbs, especially when used incorrectly… Let us start the list of most popular herbs alphabetically: Absinthium *A healing herb that promotes good health, vigour & an active agent to fight off disease. Acorn *Promotes good luck, encourages fertility, spiritual growth & prosperity. Acacia *Promotes success, monetary gain, lasting love & helps develop your psychic powers. African Violet *A herb that is known for its protection, healing & spiritual growth. Amber *Helps promote happiness, friendship, comfort & reassurance. AgrimonyEncourages protection, helps remove & cleanse away negative energy & hexes. Aletris Root *Commonly used as a magical & herbal correspondence in ‘female magic’, for protection & prosperity. AlmondWisdom & success. Aloe *(The pure form which Aloe Vera is created).

Alchemy Works Oils, Incense, Herbs and Seeds for Magic Casting a Circle The Purposes of a Circle A sacred circle has several purposes, the most significant of which is to define an area where formal ritual work can be performed. A circle is a place in which the rules and conditions are different to that of the everyday world. A circle is not a barrier, but a doorway to another world. To contain any magickal energy raised and to prevent its dissipation until it has been used up is another purpose of the circle. The sacred circle does not need to be physically represented (drawn or marked on the ground), it just needs to be visualized. The circle is a spiritual entity. 1. 2. 3. 4. 5. 6. 7. This completes the casting of your circle. How to Close a Circle Go to the North, hold up your blade, and say, “Guardians and spirits of the North wind, my ritual is now complete. Extinguish your altar candles and bow your head at the altar, saying, “I declare this scared circle closed. What is Thou looking for?

Sumerian cuneiform script and Sumerian language Sumerian was spoken in Sumer in southern Mesopotamia (part of modern Iraq) from perhaps the 4th millennium BC until about 2,000 BC, when it was replaced by Akkadian as a spoken language, though continued to be used in writing for religious, artistic and scholarly purposes until about the 1st century AD. Sumerian is not related to any other known language so is classified as a language isolate. Sumerian cuneiform Sumerian cuneiform is the earliest known writing system. Examples of the clay tokens Over time they realised that the tokens were not needed as they could make the symbols in the clay. The name 'cuneiform' means 'wedge-shaped' and comes from the Latin cuneus (wedge). By about 2,800 BC some of the Sumerian glyphs were being used to represent sounds using the rebus principle. Here are some examples of how glyphs changed over time: Source: Notable features Sumerian syllabic glyphs Sample texts Transliation Links

Greek Mythology: FAMILY TREE OF THE GREEK GODS The complete family tree of the gods is displayed over eight indexed charts. The basic structure follows Hesiod's Theogony, but that author's genealogies have been expanded with a plethora of additional gods, spirits and creatures sourced from other classical sources. Where there is disagreement amongst ancient writers as to the genealogy of a certain character, the oldest and/or most popular source has been selected for the chart. An additional family tree depicts the divine genealogy given in Hesiod's Theogony. Click on any name in the chart to view the full page entry for that individual. INDEX Index of names in the family tree KEY Overview of and key to reading the charts CHART 0 The Main Gods A short tree containing just the main gods of the pantheon. CHART 1 The Cosmogony of the Gods The primordial gods or protogenoi. CHART 2 The Children of Night The spirit descendants of Khaos (Air), Nyx (Night) and Eris (Strife). CHART 4 The Children of Sea, Storm and Earth.

Greek Gods Family Tree ludios.org Gaia hypothesis The study of planetary habitability is partly based upon extrapolation from knowledge of the Earth's conditions, as the Earth is the only planet currently known to harbour life The Gaia hypothesis, also known as Gaia theory or Gaia principle, proposes that organisms interact with their inorganic surroundings on Earth to form a self-regulating, complex system that contributes to maintaining the conditions for life on the planet. Topics of interest include how the biosphere and the evolution of life forms affect the stability of global temperature, ocean salinity, oxygen in the atmosphere and other environmental variables that affect the habitability of Earth. Introduction[edit] Less accepted versions of the hypothesis claim that changes in the biosphere are brought about through the coordination of living organisms and maintain those conditions through homeostasis. In some versions of Gaia philosophy, all lifeforms are considered part of one single living planetary being called Gaia.

The Top 37 Things You’ll Regret When You’re Old (Pay Attention To #15) 1. Not traveling when you had the chance. Traveling becomes infinitely harder the older you get, especially if you have a family and need to pay the way for three-plus people instead of just yourself. 2. You’ll kick yourself when you realize you took three years of language in high school and remember none of it. 3. No one who ever gets out of a bad relationship looks back without wishing they made the move sooner. 4. Wrinkles, moles, and skin cancer can largely be avoided if you protect yourself. 5. “Nah, dude, I’ll catch Nirvana next time they come through town.” 6. Looking back you’ll think, What was I so afraid of, comfort zone? 7. Too many of us spend the physical peak of our lives on the couch. 8. Few things are as sad as an old person saying, “Well, it just wasn’t done back then.” 9. Look, you gotta pay the bills. 10. It’s not just that your grades play a role in determining where you end up in life. 11. 12. 13. 14. You’ll be embarrassed about it, frankly. 15. 16. 17. 18. 19. 20. 21.