18 of Nature's Most Powerful Medicinal Plants 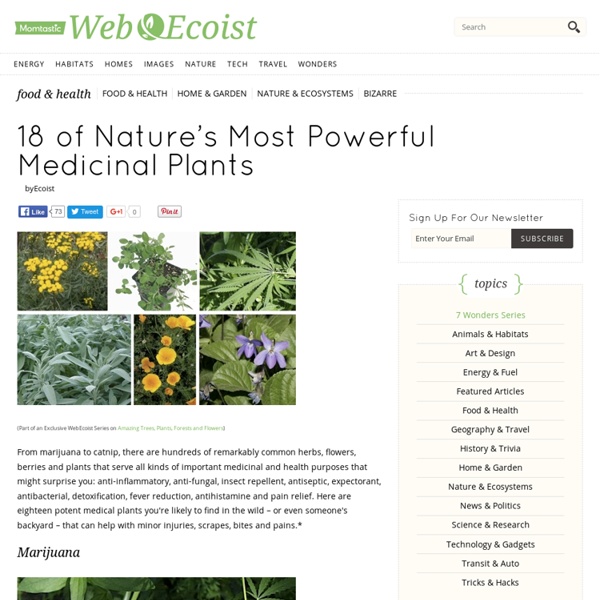 (Part of an Exclusive WebEcoist Series on Amazing Trees, Plants, Forests and Flowers) From marijuana to catnip, there are hundreds of remarkably common herbs, flowers, berries and plants that serve all kinds of important medicinal and health purposes that might surprise you: anti-inflammatory, anti-fungal, insect repellent, antiseptic, expectorant, antibacterial, detoxification, fever reduction, antihistamine and pain relief. Here are eighteen potent medical plants you're likely to find in the wild – or even someone's backyard – that can help with minor injuries, scrapes, bites and pains.* Marijuana Images via Current and Street Knowledge Seriously. Lady Ferns Image via US Forest Service If you grew up in the Pacific Northwest you likely know what ferns are good for: treating stinging nettles. California Poppy Images via Netstate and Mountain Meadow Seeds The brilliant blooms of the poppy make this opioid plant an iconic one. Blood Flower Tansy Image via Earth Heart Farm Korean Mint (hyssop) Sage

Integrated Supplements Blog Thanks in large part to the incessant promotion of flaxseeds, flax meal, and flaxseed oil in recent years, it’s easy to get the impression that flax should be a part of any health–conscious person’s diet. But it’s highly likely that a great number of people may be unwittingly doing themselves more harm than good by consuming products made from this innocent–looking little seed. With flax, it seems that (as is so often the case in the marketing of health foods) we’ve only been given the part of the story which sells products, and not the part of the story we need to make a truly informed decision.

15 Medicinal Plants And Herbs From The Cherokee People Photo credit: bigstock.com If you love natural medicine, and you love discovering new plants or herbs to help heal your body naturally, then this article is for you. Some of the best healing plants come to us through traditional Cherokee healers. Using plants to treat common illnesses or injuries has been around for centuries as there were no “doctors” or pharmaceuticals. Black cohosh Overview More than two centuries ago, Native Americans discovered that the root of the black cohosh plant (Actaea racemosa, formerly known as Cimicifuga racemosa) helped relieve menstrual cramps and menopausal symptoms, such as hot flashes, irritability, mood swings, and sleep disturbances. Today, people use black cohosh for these same reasons. In fact, the herb has been widely used in Europe for more than 40 years and is approved in Germany for premenstrual discomfort, painful menstruation, and menopausal symptoms. Menopausal Symptoms Studies confirm that black cohosh is effective for relieving menopausal symptoms, although some have found no improvement.

Herbal Remedies" While some people may dismiss herbal remedies as quackery, the use of botanicals is well rooted in medical practice. Ancient doctors methodically collected information about herbs and developed well-defined pharmacopoeias to treat a variety of ailments. More than a quarter of all drugs used today contain active ingredients derived from those same ancient plants. It's estimated that nearly 80 percent of the world's population use herbs for some aspect of primary health care. In the United States, more than 1,500 botanicals are sold as dietary supplements; top-selling herbs include echinacea, garlic, goldenseal, ginseng, ginkgo, saw palmetto, aloe, ephedra, Siberian ginseng, and cranberry. Clinical studies on a handful of herbs are underway, but to help you understand the benefits and risks, we've compiled a comprehensive guide to herbs, including potential uses, side effects, and precautions.

Healing Spices Every Kitchen Needs to Have Herbs and spices can make time spent cooking or baking in the kitchen a fun, creative and tasty experience. However, what you may not know is that these same herbs have numerous benefits unrelated to the taste or aroma of food. In fact, many have components within that make them beneficial to people’s health. These eight options are among the most beneficial in the kitchen.

27 Medicinal Plants Worth Your Garden Space Playful as kids are, accidents happen. And the accident that befallen me at 7 years old was the feeling of the hot exhaust pipe of a motorcycle kissing the skin of my leg. Grandma was around and saw it. Immediately, she took out a knife and slice the thick lower part of the aloe vera plant by the garden and rubbed the exposed end on the burn. medicinal herbs: VIPER'S BUGLOSS - Echium vulgare Latin name: Echium vulgare Family: Boraginaceae (Borage Family) Medicinal use of Viper's Bugloss: Viper's bugloss was once considered to be a preventative and remedy for viper bites. It is related to borage, Borago officinalis, and has many similar actions, especially in its sweat-inducing and diuretic effects. In recent times, however, it has fallen out of use, partly due to lack of interest in its medicinal potential and partly to its content of pyrrolizidine alkaloids which are toxic in isolation.

All Hail the Kale! (and an amazing way to eat it) - Happy Hormones Move over broccoli, is kale the true king of the veggie world? It’s certainly making its presence felt with superfood accolades aplenty and featuring on all the trendiest restaurant menus. A lesser known part of the cruciferous veg family, it shares its greatness with broccoli, cabbage, cauliflower, Brussels sprouts – all noted for their super nutrient status and health benefits. But kale beats them all on polyphenol content – and that’s what makes it so special. Echium vulgare Viper's Bugloss, Common viper's bugloss PFAF Plant Database Translate this page: Powered by Translate Summary Physical Characteristics

Six Chinese Herbs Every Doctor Should Know NEW ORLEANS—Traditional Chinese medicine holds a vast pharmacopeia of herbs, minerals, animal tissues and other natural products. But in the US, only a small number are in widespread use outside of Chinese immigrant communities. Michael Arnold, MD, a Pacific Grove, CA, pediatrician who now practices exclusively as a Chinese herbalist, said there are six Chinese herbs with which every physician should be familiar. "You will see these in your practice—if you ask," Dr. Arnold told attendees at the annual meeting of the American Academy of Medical Acupuncture.

Echium vulgare - Useful Temperate Plants Boraginaceae The Temperate Database is in the process of being updated, with new records being added and old ones being checked and brought up to date where necessary. This record has not yet been checked and updated. Common Name: Viper's Bugloss

Rau Cải (Guide to Vietnamese Herbs and Veggies) Vietnamese dishes heavily depend on the use of fresh herbs. Unlike most western traditions where herbs are only used in relatively small amounts to add flavor; Vietnamese people consume their herbs in high amounts as if they were veggies. At many Vietnamese tables, there is sure to be an abundance of fresh mixed herbs on table to compliment the meal.