8 Ways to Prepare Your Pets for War 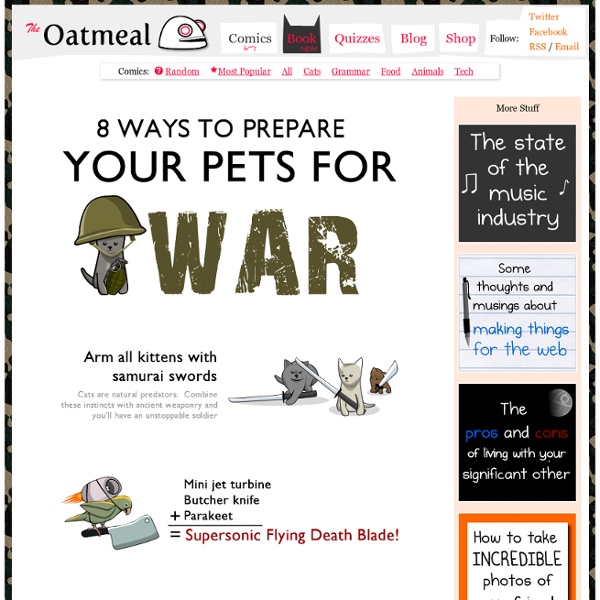 Stefano Unterthiner Photography : Animals Face to Face | COLT + RANE Colt + Rane Stefano Unterthiner Photography : Animals Face to Face 10 children’s characters who were definitely on drugs Dormouse blissfully unaware he was saved from the jaws of death By Daily Mail Reporter Updated: 15:51 GMT, 16 March 2010 A hibernating dormouse curls up in the palm of a hand, blissfully unaware he has just been rescued from almost certain death in sub-zero temperatures. The tiny animal can only be held for just a few seconds because its carer's warming touch would wake it prematurely. Dormouse expert Dave Williams saved the three-inch creature from a back garden where he was left exposed to frost, wind and rain. Nap time: The hibernating dormouse curls up in the palm of a hand after being rescued from sub-zero temperatures in a back garden A gardener accidently raked its woven grass nest from under a box hedge he had trimmed near Leatherhead, Surrey. It may have died if left exposed to freezing temperatures or struggled to find the seeds, nuts and berries it eats if woken early. Mr Williams, from Surrey Wildlife Trust, examined the nest and found the mouse was healthy and sleeping inside. It is nocturnal and a protected species.

LOL: The Recurring Prop Newspaper If you watch enough television shows and movies, then you might even start to notice that a bunch of the same props are used over and over again. I first noticed this with a magazine prop in various television shows including Married With Children, which featured a gum advertisement on the back cover. Someone on Reddit recently put together a compilation of photos from various television shows, commercials and movies, showing how one newspaper prop gets around and is reused, and reused again. I don’t know the story behind this prop newspaper, but I assume it was created as a royalty free prop for television shows. And here is more: Power Rangers Zeo A Murder of Crows A texasi láncf? No Country For Old Men Angel 3×04 Lucky Louie – 1×06 Everybody hates Chris 2×05 Desperate Housewives – 2×13 Scrubs 6×16 Modern Family 1×16 Travelers Insurance – Prized Possession (Dog Commercial) more photos via: Katus Cool Posts From Around the Web:

Your morning adorable: Baby Francois' langur monkey makes his debut at Australia's Taronga Zoo At the Taronga Zoo in Sydney, Australia, a great deal of excitement surrounds the latest addition to the resident family of Francois' langur monkeys. A male Francois' langur named Keo-co was born Jan. 30 and ventured into an outdoor enclosure for the first time on Wednesday. Keo-co's older sister, Elke, was born in 2009 and was the first offspring for mother Saigon. Unfortunately, Saigon didn't immediately take to motherhood and zoo staff elected to raise Elke themselves in order to ensure that she was healthy and well cared for. This time around, Saigon seems to have gotten the hang of parenting and the zoo reports that Keo-co is extremely bonded to her. Francois' langur monkeys are native to parts of Vietnam and China. See more photos and a video of Keo-co after the jump! RELATED CUTE ANIMAL BABIES:• Your morning adorable: Baby mangabey monkey drinks from a bottle at Rome's Bioparco Zoo• Your morning adorable: Endangered silvery gibbon baby debuts at Germany's Hellabrunn Zoo

That Darn Deadpool: Now on 21 Variant Covers This Month Not to sound like an old-timer, but I can recall an age when appearing on a cover (yes, even a variant) meant a character, however limited their role, would at least grace a storyline in some small capacity. That age is dead and Deadpool killed it. Personally, I don’t mind. I drew Ed McGuinness’ DP on every third homework assignment I filled out through seventh grade. Still, I take notice when Marvel’s February line bears more than two dozen ‘Pool covers, even if most are just variants. All told the Merc With a Mouth graces 21 variant covers, all of which play to DP’s comedic strengths by employing fan-friendly gags. Take a look to see which one you’d rather live in this month after the jump…

Most Content and Relaxed Cat on Earth This is Shironeko. You probably have seen him somewhere – the zen master cat. Shironeko is perhaps the most content and relaxed cat on earth. His name translates literally as “White Cat.” Shironeko was born on March 8th 2002, so that makes him an 8-year-old boy. He may look pudgy in the photos, but he only weighs about 9.9 lbs (4.5kg). Shironeko looks like a Turkish van cat to me. You can find more photos of Shironeko at his gallery or blog. You may also like:

Death by Caffeine We’ve used the very latest research to determine what’s appropriate for your body weight. See more about your daily caffeine limits. Recommendations for caffeine levels are different for aged 18 and under. The calculator is intended for use only by adults over 18. See more about caffeine limits for children and teens. Sure are. On the result, click on the item for more detailed caffeine information. Yes. A lethal dose is based on the amount of the caffeine in your system at one time. By using this calculator you agree to our terms of use.