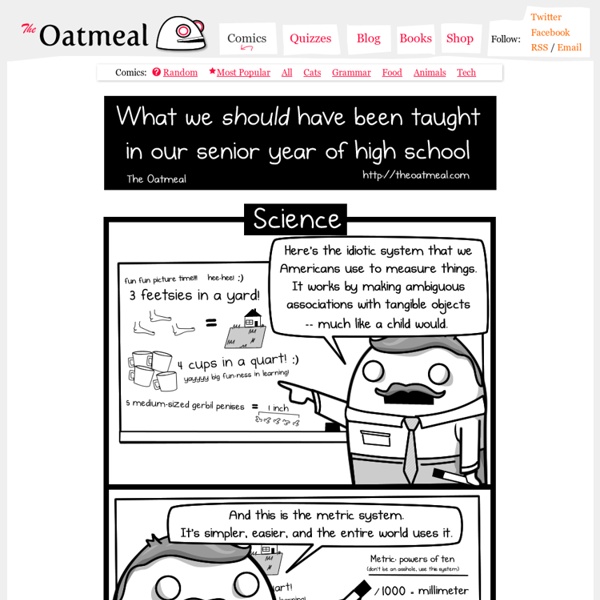 Epicycloid The path traced out by a point on the edge of a circle of radius rolling on the outside of a circle of radius Who doesn't like a blonde joke? A blonde walks into a bank in New York City and asks for the loan officer. She says she’s going to Europe on business for two weeks and needs to borrow $5,000. The bank officer says the bank will need some kind of security for the loan, so the blonde hands over the keys to a new Rolls Royce. The car is parked on the street in front of the bank; she has the title, and everything checks out. The bank agrees to accept the car as collateral for the loan.

Achievement Unlocked! — Evil Routers Achievement Unlocked! 175 comments I had a little fun with an online achievement generator (and stole some from a Something Awful thread). If you work in IT for any period of time, I’m sure you can relate. At the gym: who is looking at whom All artwork and content on this site is Copyright © 2014 Matthew Inman. Please don't steal. TheOatmeal.com was lovingly built using CakePHP All artwork and content on this site is Copyright © 2014 Matthew Inman. K-MODDL > Tutorials > Reuleaux Triangle If an enormously heavy object has to be moved from one spot to another, it may not be practical to move it on wheels. Instead the object is placed on a flat platform that in turn rests on cylindrical rollers (Figure 1). As the platform is pushed forward, the rollers left behind are picked up and put down in front. An object moved this way over a flat horizontal surface does not bob up and down as it rolls along. The reason is that cylindrical rollers have a circular cross section, and a circle is closed curve "with constant width." What does that mean?

Funny keeping a zipper up tip Posted on November 2, 2011 in Humor If you’re new here, you may want to subscribe to our RSS feed or follow us on Facebook or Twitter . Thanks for visiting! Rate this Post (1 votes, average: 5.00 out of 5) If you do this in an email, I hate you All artwork and content on this site is Copyright © 2014 Matthew Inman. Please don't steal. TheOatmeal.com was lovingly built using CakePHP All artwork and content on this site is Copyright © 2014 Matthew Inman. Scientists Discover The Oldest, Largest Body Of Water In Existence Scientists have found the biggest and oldest reservoir of water ever--so large and so old, it’s almost impossible to describe. The water is out in space, a place we used to think of as desolate and desert dry, but it's turning out to be pretty lush. Researchers found a lake of water so large that it could provide each person on Earth an entire planet’s worth of water--20,000 times over. Yes, so much water out there in space that it could supply each one of us all the water on Earth--Niagara Falls, the Pacific Ocean, the polar ice caps, the puddle in the bottom of the canoe you forgot to flip over--20,000 times over. The water is in a cloud around a huge black hole that is in the process of sucking in matter and spraying out energy (such an active black hole is called a quasar), and the waves of energy the black hole releases make water by literally knocking hydrogen and oxygen atoms together. The new cloud of water is enough to supply 28 galaxies with water.

The OSTRICH Story A man walks into a restaurant with a full-grown ostrich behind him. The waitress asks them for their orders. The man says, "A hamburger, fries and a coke," and How Mathematics Can Make Smart People Dumb - Ben O'Neill Mathematics can sometimes make smart people dumb. Let me explain what I mean by this. I don't mean that it is dumb not to be good at mathematics.

20 Absolutely Funny eCards Written By Sarah January 5th, 2012 eCards have become another way for people to disconnect from the personal experiences of shopping for a card, writing a nice note and mailing it off to a loved one. Now people just sit around the computer, type a little message and wallah! 'You've Got Mail' 100 Very Cool Facts About The Human Body The Brain The human brain is the most complex and least understood part of the human anatomy. There may be a lot we don’t know, but here are a few interesting facts that we’ve got covered. Nerve impulses to and from the brain travel as fast as 170 miles per hour.