Why working at home is both awesome and horrible 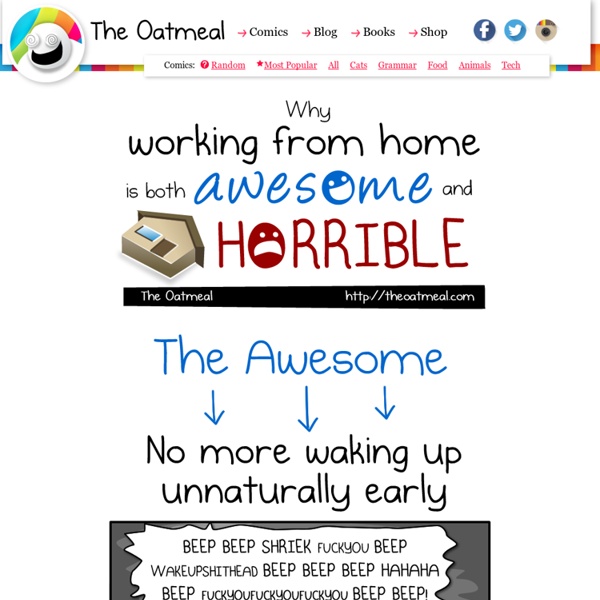 Internet Humor Archive - Simpsonisms "Now son, you don't want to drink beer. That's for Daddys, and kids with fake IDs." "Marge, it takes two to lie. One to lie and one to listen." "You couldn't fool your mother on the foolingest day of your life if you had an electrified fooling machine." "Marge, don't discourage the boy! "If you really want something in life you have to work for it. "To alcohol! "I saw this in a movie about a bus that had to speed around a city, keeping its speed over 50, and if its speed changed, it would explode! "I want to share something with you - the three sentences that will get you through life. "Marge, you're as pretty as Princess Leia and as smart as Yoda." "Step aside everyone! "Don't let Krusty's death get you down, boy. "Son, when you participate in sporting events, it's not whether you win or lose: it's how drunk you get." "Lisa, if the Bible has taught us nothing else - and it hasn't - it's that girls should stick to girls' sports, such as hot oil wrestling and foxy boxing and such and such."

If you do this in an email, I hate you All artwork and content on this site is Copyright © 2014 Matthew Inman. Please don't steal. TheOatmeal.com was lovingly built using CakePHP All artwork and content on this site is Copyright © 2014 Matthew Inman. TheOatmeal.com was lovingly built using CakePHP Toronto vs. Paris WikiOpenTruc The 5 Scientific Experiments Most Likely to End the World Let's face it, we really trust science. In fact, studies suggest that the vast majority of people will murder another human being, if a guy in a lab coat tells them it's OK. But surely in their insatiable curiosity and desire to put knowledge above all things, science would never, say, inadvertently set off a chain of events that lead to some sort of disaster that ended the world. Well, here's five experiments that may prove us wrong. Recreating the Big Bang Scientists are kind of pissed that they weren't around when the Big Bang happened. The solution, science says, is to make it happen again. God, 1. What Could Possibly Go Wrong? Well, first imagine an apocalyptic nuclear holocaust. So, Basically It's Like... Imagine you have a huge tanker truck parked outside a children's hospital. How Long Have We Got? Meet the Large Hadron Collider. This is not only the largest particle accelerator ever built, it's the largest anything ever built. Risk Level: 3 The Quantum Zeno Effect Not Pictured: Life.

How to use a semicolon Data brokers sell lists of rape victims, AIDS patients, privacy group finds - Dec. 18, 2013 The World Privacy Forum uncovered these lists, along with several others, while investigating how data brokers collect and sell consumer information. Marketers buy this data so they can target shoppers based on everything from their income to clothing size. Other lists the nonprofit found included the home addresses of police officers, a mailing list for domestic violence shelters (which are typically kept secret by law) and a list of people with addictive behaviors towards drug and alcohol. The mere existence of these lists highlights the need for increased government regulations, said World Privacy Forum executive director Pam Dixon. Related: What your zip code reveals about you "This is where I urge Congress to take action," she said Wednesday at a Senate committee hearing. Currently, data brokers are required by federal law to maintain the privacy of a consumer's data only if it is used for credit, employment, insurance or housing. Related: Find out what Big Data knows about you

Visual Thinking Evolution A mind map is a diagram used to represent words, ideas, tasks, or other items linked to and arranged around a central key word or idea. Especially in British English, the terms spidergram and spidergraph are more common,[1] but they can cause confusion with the term spider diagram used in mathematics and logic. Mind maps are used to generate, visualize, structure, and classify ideas, and as an aid to studying and organizing information, solving problems, making decisions, and writing. The elements of a given mind map are arranged intuitively according to the importance of the concepts, and are classified into groupings, branches, or areas, with the goal of representing semantic or other connections between portions of information. Mind maps may also aid recall of existing memories. By presenting ideas in a radial, graphical, non-linear manner, mind maps encourage a brainstorming approach to planning and organizational tasks. Reference: wikipedia

Short Quotes to Live By Many times when you have some really interesting quotes in your life through various mediums like funny sayings or some famous proverbs, it works like the psalms! Just keeping them in your bag or writing them down on your book marker or desk is sure to motivate you in the daily mundane activities of life. Have a look at the collection of short quotes to live by. Confidence comes not from always being right but not fearing to be wrong. ~ Peter T. People may forget what you said but they'll never forget how you made them feel. ~ Maya Angelou Wise men speak because they have something to say; Fools because they have to say something. ~ Plato Great minds discuss ideas. Do what you can, with what you have, where you are. ~ Theodore Roosevelt The only man who never makes a mistake is the man who never does anything. ~ Theodore Roosevelt Wisdom is not a product of schooling but of the lifelong attempt to acquire it ~ Albert Einstein Learn from yesterday, live for today, hope for tomorrow.