What it means when you say "literally" 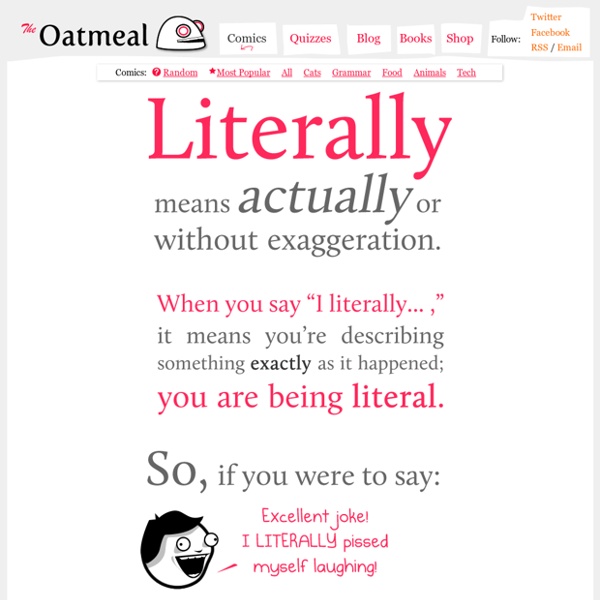 Closet doors remain closed in pro sports Gays are represented in every profession except professional sports and if an athlete comes out it is only after his career is over, a panel discussion at the University of Toronto heard on Friday. That is where G-Force hockey - an all-star gay American hockey team - comes in to set an example and break down negative stereotypes about gay athletes. "I believe in what we are trying to do," said Keith Miller, a defenceman on the team which is in Toronto for a tournament against other gay and straight teams. "Our message is young kids in sport can come out and not have to worry. We want to change attitudes and help young players come out." Glenn Witman, who plays defence, says there are likely between 2% to 7% of players who are gay on every sports team or league - just like in the general population. "Gay men and lesbians have been a part of every sports team since sport began," Witman said. "The mission of G-Force is to show gays make great athletes," Witman said.

10 Words You Need to Stop Misspelling All about the &quot;onMouseOver&quot; incident The short story: This morning at 2:54 am PDT Twitter was notified of a security exploit that surfaced about a half hour before that, and we immediately went to work on fixing it. By 7:00 am PDT, the primary issue was solved. And, by 9:15 am PDT, a more minor but related issue tied to hovercards was also fixed. The longer story: The security exploit that caused problems this morning Pacific time was caused by cross-site scripting (XSS). We discovered and patched this issue last month. Early this morning, a user noticed the security hole and took advantage of it on Twitter.com. Other users took this one step further and added code that caused people to retweet the original Tweet without their knowledge. This exploit affected Twitter.com and did not impact our mobile web site or our mobile applications. We’re not only focused on quickly resolving exploits when they surface but also on identifying possible vulnerabilities beforehand.

The 10 Types of Crappy Interviewees All artwork and content on this site is Copyright © 2015 Matthew Inman. Please don't steal. TheOatmeal.com was lovingly built using CakePHP All artwork and content on this site is Copyright © 2015 Matthew Inman. TheOatmeal.com was lovingly built using CakePHP A FOURTH Suicide! Gay 19 Y.O. College Student Kills Himself After Hidden Camera Broadcasts Him Having Sex Over The Internet This is possibly one of the most horrific things we've heard in quite some time. Tyler Clementi, a gay freshman at Rutgers University, has taken his life by jumping off of the George Washington Bridge last week after two classmates secretly filmed him having sex and then broadcast it over the internet. Dharun Ravi and Molly Wei have each been charged with two counts of invasion of privacy, and could face up to five years in prison if convicted on a third degree offense. Worse yet, Ravi is being charged with two additional counts of invasion of privacy, because he apparently attempted to film AGAIN two days later! Check out (above) a news report on the incident before the student's death. Absolutely vile. Why anyone would do that to someone else is beyond us. Our hearts go out to his family, friends, and loved ones. Four teenage boys dead in 3 weeks!!!! ENOUGH is ENOUGH!

How to use a semicolon Auto-complete and Reply to All come to Twitter 21 September '10, 03:42pm Follow All things considered, the new Twitter is a raging success. However, there are always new features that can be added to make a great thing even greater. Hearing that call, Twitter has implemented two features today that Twitter developer Dustin Diaz hinted at recently. Reply to AllAuto-complete The reply to all function does exactly what you’d think – if two or more names are mentioned in a tweet, your reply button will now reply to all mentioned accounts. Auto-complete is like bringing Google Instant to your Twitter page.

Savage Love by Dan Savage - Columns - Savage Love - Dan Savage October 7, 2010 By Dan Savage My husband has a cuckold fetish, which we have indulged through two drunken threesomes with two of his best friends. The first time, he really had to talk me into it. The second time, he steered me in that direction and I took the wheel. Not Ready To Stop You close the damn door and you let your husband see that it's closed. That's pretty much the only way you can have your husband and, at some point down the road, "the control he gave you" too, i.e., his consent to fuck around with other men. Trust me, NRTS: Your husband is still into cuckolding. Which he still is, right? I am a 23-year-old lesbian with a beautiful girlfriend whom I met a month ago. How can I approach this without making her self-conscious? Lesbian Over Ungodly Din You don't want to make her self-conscious, and that's a lovely impulse, but she's making you self-conscious, LOUD, and you're just going to have to risk making her self-conscious. Jewdizzle A Concerned Mom mail@savagelove.net Share via

How To Use An Apostrophe Jim Hoft: Dumbest Man on the Internet? With a few exceptions, the upper echelon of the conservative blogosphere is a mess. Breitbart's "Big" websites traffic in misleading non-scandals and have published people like 9-11 truther Michael Moriarty, racist penis-enlarger/ vagina-tightener Kevin Pezzi, and former SNL actress/spouter-of-incomprehensible nonsense Victoria Jackson. NewsBusters and The Media Research Center spend a lot of time finding the liberal bias in television shows that don't treat their gay characters as ostracized sub-humans. Atlas Shrugs is run by a woman that is haunted at every turn by Islamic crescents, and whose hatred for the president once compelled her to claim that his penchant for "purple" ( actually blue ) neckties meant that Democrats were "Flying the Gangsta Colors at the White House." But despite all this stiff competition, Jim Hoft (aka Gateway Pundit) stands out as uniquely incompetent. Who are you going to believe - Jim Hoft or your lying eyes? How about this one: This, of course, is Rev.

Homophobic Landlord Fined September 22nd, 2010 William Goertzen, a landlord from Yellowknife who refused occupancy to a gay couple because he felt homosexuality was “unnatural,” has been fined for his actions. Goertzen had already signed a one-year lease with Scott Robertson and Richard Anthony, but refused to honor the legal agreement when he found out they were a gay couple. He then kept their $1,125 security deposit and wouldn’t pay it back until he was ordered to by the rental court. Charming lad. The couple finally took Goertzen to the Human Rights Tribunal, where he argued that his personal religious beliefs exempted him from recognising the couple’s legal rights. Luckily for everyone, religious freedom doesn’t mean you get to ignore your legal responsibilities. Gay couple awarded $13.4K for rental refusal [CBC News]