The Origin of Words and Names 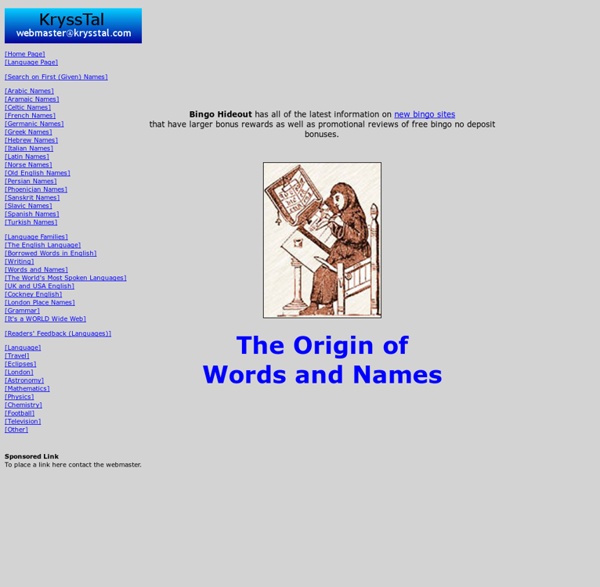 The English language has developed from an Anglo-Saxon base of common words: household words, parts of the body, common animals, natural elements, most pronouns, prepositions, conjunctions and auxiliary verbs. Other modern words in English have developed from five sources. These are discussed below. Words Created From Nothing Examples of words that have just appeared in the language out of nothing are byte, dog (replacing the earlier hund), donkey, jam, kick, log, googol, quasar and yuppie. The latter two are acronyms (words made from initials).

List of Greek and Latin roots in English Some of those used in medicine and medical terminology are not listed here but instead in Wikipedia's List of medical roots, suffixes and prefixes. A[edit] B[edit] C[edit] D[edit] E[edit] The World's Most Spoken Languages And Where They Are Spoken This beautifully illustrated infographic (above), designed by South China Morning Post’s graphics director Alberto Lucas Lopéz, shows the most spoken known languages in the world and where they’re spoken by the 6.3 billion people included in the study. Based on records collated from the database Ethnologue, the infographic illustrates the wide-ranging facts and figures of the world’s living languages catalogued since 1951. “There are at least 7,102 known languages alive in the world today. Twenty-three of these languages are a mother tongue for more than 50 million people.

How To Draw "How to Draw" is a collection of tutorials that will teach you everything from perspective basics to shading chrome. Never picked up a pencil before? Fear not! From simple line drawings to modern art and easy animations, we've got you covered. All projects come from Instructables.com and contain pictures for each step so you can start your masterpiece today! Instructables is the most popular project-sharing community on the Internet. Cliche Finder Have you been searching for just the right cliché to use? Are you searching for a cliché using the word "cat" or "day" but haven't been able to come up with one? Just enter any words in the form below, and this search engine will return any clichés which use that phrase... Over 3,300 clichés indexed! What exactly is a cliche?See my definition Do you know of any clichés not listed here?

Etymologically Speaking... From the old Arabic word "hashshshin," which meant, "someone who is addicted to hash," that is, marijuana. Originally refered to a group of warriors who would smoke up before battle. Aaron White adds: You may want to explore the fact that the hashshshins were somewhat of a voodoo-ized grand conspiracy scapegoat cult (the very fact of their existence is impossible to confirm). They supposedly were a secret society (a la the FreeMasons) which was influential in every middle eastern court from Persia to Bangladesh. The case of the missing “u”s in American English Before you consciously became aware of your decision to read this article, your brain was already making the necessary preparations to click the link. There are a few crucial milliseconds between the moment when you’re consciously aware of a plan to act, and the moment you take action. This brief window is thought by some scientists to be the moment in time when we can exercise free will. It gives us the chance to consciously make a decision, suggesting we aren’t just slaves to our impulses.

Allegory of the Cave Plato realizes that the general run of humankind can think, and speak, etc., without (so far as they acknowledge) any awareness of his realm of Forms. The allegory of the cave is supposed to explain this. In the allegory, Plato likens people untutored in the Theory of Forms to prisoners chained in a cave, unable to turn their heads. All they can see is the wall of the cave. Behind them burns a fire. Between the fire and the prisoners there is a parapet, along which puppeteers can walk.