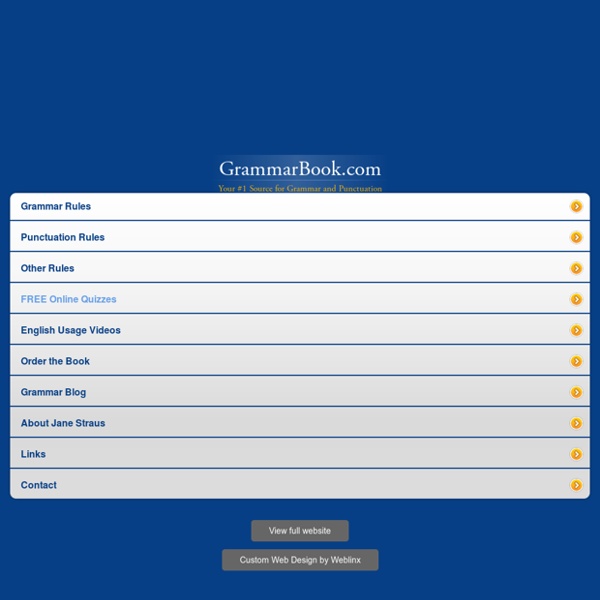 12 Awesome Language Resources for the Word Nerd I’m an unabashed word nerd. I majored in English and have been a high school English teacher for almost 30 years. I run an online program helping homeschoolers develop writing skills, and I manage this wordy blog and a wordy Facebook page. I have become, over the years, something of an expert on grammar and usage, but it’s not due to any particular cleverness on my part. Here are a dozen of my favorite resources. I own three fat dictionaries, and on just about every word question, I consult all three. The first Webster’s Dictionary was published in 1928. The last unabridged dictionary published by Merriam-Webster is their rather controversial Third New International Dictionary of the English Language that was published in 1961. In the meantime, they keep revising their abridged but useful Collegiate Dictionary–now in it’s 11th iteration. The American-Heritage Dictionary is noticeably more conservative and prescriptive than the Merriam-Webster. The second edition was published in 1989.

Online Spell Checker - SpellWeb.com Creative Writing 101 RJ Great article. Morning is definitely the time where I am most creative. I think it’s because my mind is the freshest and the least cluttered at this time of day. Doug Rosbury When I write, it is with an emphasis on the sharing of wisdom arising from my life experience. Wether one could reasonably term such writing as being creative or not I don’t necessarily concern myself with. The creative aspect which I believe is part of a writing nevertheless may be found in how I address people with careful consideration regarding how I may come across to them. Parts of Speech There are thousands of words in any language. But not all words have the same job. For example, some words express "action". We can categorize English words into 8 basic types or classes. Some grammar books categorize English into 9 or 10 parts of speech. It's quite important to recognize parts of speech. In this lesson, we have an overview of the eight parts of speech, followed by a quiz to check your understanding:

British Slang If you’re planning on visiting London in the future, you might just want to familiarise yourself with some British Slang expressions that are very commonly used by the British. They will be very useful particularly if you’re likely to be socialising with Londoners. 1. This famous expression is always used on trains and the London Underground (Tube). 2. “Mate” is British Slang used to refer to men. 3. If something is “naff”, it is very uncool. 4. This British Slang word is not to be confused with the film of the same title where the main characters removed all their clothes for a striptease act. 5. The literal meaning is larva, but it is also another word for food. 6. “I love Pringle Crisps. 7. When the English don’t like something, but don’t want to be rude they will say: ” I’m afraid that going to nightclubs is not my cup of tea”. 8. This is another British slang word for the UK currency, the pound. 9. 10. This basically means ‘thank you’. If you enjoyed this post, please share it. Shanthi

theconversation If you struggle to understand the teenagers and young people around you when they call their schoolfriend a durkboi and try to cadge some peas, you are not alone. The idea that they are communicating in a different language from their parents has been the subject of excited chatter on parenting websites and among some researchers. A defining characteristic of youth slang is thought to be its faddishness – the fact that terms have a rapid turnover, quickly coming in and out of fashion and then disappearing before parents and teachers have time to decode them. The reality is more complicated: novelty is all-important but for each generation the expressions they encounter will be new to them. So although each age group and almost every local clique do invent their own words, there is a common core of slang that persists for years: such as cool, wicked, solid and sick for good, and chilling for relaxing. A wealth of words for the same thing Variations on a theme

Story Starters Gripping Story starters are essential. They grab the reader’s attention. Make them want to read more and keep them reading. Some of us are born with a unique talent and have a natural flair when it comes to connecting words, some of us don’t. Find below a selection of story starters from a variety of different sources. From A Tale of Two Cities (Charles Dickens) It was the best of times, it was the worst of times, it was the age of wisdom, it was the age of foolishness, it was the epoch of belief, it was the epoch of incredulity, it was the season of Light, it was the season of Darkness, it was the spring of hope, it was the winter of despair, we had everything before us, we had nothing before us, we were all going direct to Heaven, we were all going direct the other way-in short, the period was so far like the present period, that some of its noisiest authorities insisted on its being received, for good or for evil, in the superlative degree of comparison only. Recommended Links

How to use Dotsub Now you can easily share your video content in any language! Dotsub makes it simple to create and view captions and subtitles in multiple languages. These subtitles can be viewed anywhere your video travels - on websites, blogs, and mobile devices. Upload your video Uploading your videos is quick and easy. Select any digital file (up to 4GB) Tell us about your video Choose your privacy settings Click 'upload file' That is it, you're done! Caption your video Next, write up all the dialogue, or caption it. Select the "caption" option Start typing When you are finished click "complete" That's it, you're done! Translate your video Now that your video has been uploaded and captioned, it is ready to be translated/subtitled. Select the "translate" option Choose a language from the drop down menu Hit the translate button and start translating! The translation tool is easy to use. Share your video Now you are ready to share your video with family, friends, fans, or the world!

Placeholder names in English and other languages | OxfordWords blog If you follow politics, you will have noticed that politicians often invoke the cliché of the ‘man in the street’. You may have heard them referring to the average Joe, Joe Bloggs, John Public, Joe Sixpack, etc. when talking to an audience, addressing everyone and no one, rather than someone in particular. The English language has several of those placeholder names and, more often than not, they denote a male person – implying that the average person is a man, the everyman. There’s also the famous John Doe – the name for an unidentified person that you would come across in a legal context. Here, a female equivalent actually exists: Jane Doe. If you want to talk about ordinary people in general, you may also call them Tom, Dick, and Harry in English, although the Brewer’s Dictionary of Phrase & Fable notes that this Victorian term is particularly attributed to people unworthy of notice. Of course, placeholder names also exist in other languages. Italian Swedish German