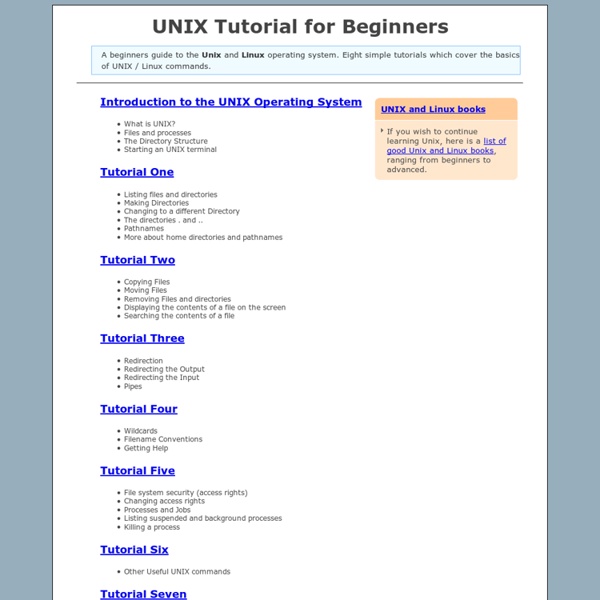 A beginners guide to the Unix and Linux operating system. Eight simple tutorials which cover the basics of UNIX / Linux commands. Introduction to the UNIX Operating System What is UNIX? Files and processes The Directory Structure Starting an UNIX terminal Tutorial One Listing files and directories Making Directories Changing to a different Directory The directories . and .. Recommended UNIX and Linux books If you wish to continue learning Unix, here is a list of good Unix and Linux books, ranging from beginners to advanced. Download This tutorial is available for download so you can work offline.

Read Raspberry Pi: Measure, Record, Explore. Introduction Welcome! Hi there. A Unix Utility You Should Know About: Pipe Viewer Hi all. I'm starting yet another article series here. This one is going to be about Unix utilities that you should know about. The articles will discuss one Unix program at a time.

Call me maybe: MongoDB stale reads In May of 2013, we showed that MongoDB 2.4.3 would lose acknowledged writes at all consistency levels. Every write concern less than MAJORITY loses data by design due to rollbacks–but even WriteConcern.MAJORITY lost acknowledged writes, because when the server encountered a network error, it returned a successful, not a failed, response to the client. Happily, that bug was fixed a few releases later. Since then I’ve improved Jepsen significantly and written a more powerful analyzer for checking whether or not a system is linearizable. I’d like to return to Mongo, now at version 2.6.7, to verify its single-document consistency. (Mongo 3.0 was released during my testing, and I expect they’ll be hammering out single-node data loss bugs for a little while.) Python jobs in London Python Developer - London Python, Django, Postgres, MongoDB, Celery, Backbone, RabbitMQ International tech company in the heart of London are seeking a Python Developer with strong Python and Django skills to develop a cutting edge e-commerce framewo... QA Tester / Python Developer / Automated Testing Multiple Positions (Python / C++). Global leading provider of digital animation software used by major film companies is seeking a bright, enthusiastic Software Tester / Python Developer in Test. You w... Python Web Engineer - Leading Tech Startup - London Python / Flask / Django / Google App Engine / Backbone.js / HTML5 / CSS3 / Javascript A leading Tech Startup in Central London are looking for a Python Web Engineer (HTML5 / CSS3 / Javascript) Exper...

Installing the latest Wine on Ubuntu Installing WineHQ packages If you have previously installed a Wine package from another repository, please remove it and any packages that depend on it (e.g., wine-mono, wine-gecko, winetricks) before attempting to install the WineHQ packages, as they may cause dependency conflicts. If your system is 64 bit, enable 32 bit architecture (if you haven't already): Raspberry Pi Wonderland Sensors usually need an analog input port to read their value. To process the values from analog input, Raspberry Pi would need an external Analog to Digital Converter (ADC) chip or interface with Gertboard or Arduino. However, a simple method making use of the capacitor can be used to get the values of a sensor. This is because some sensors such as a photocell, thermistor, and force sensitive resistor, behave like a resistor.

Advanced Grunt tooling Grunt has made web development more enjoyable. By automating repetitive tasks, it has allowed web developers to focus on building features rather than copying, compiling, and configuring. In this post, I will share some advanced tooling with Grunt which will help you use it to its full potential. Bash functions SAS Jobs : TheITJobBoard.co.uk All SAS jobs The dynamic nature of IT and the reliance on the web has meant that its importance in the business world is continuing to increase and thus the need for IT professionals has soared. E-skills has estimated that companies will need 150,000 new IT professionals each year and these skills extend across the plethora of IT specialisation’s.

Open Source and Linux - HP Linux Home With proven abilities to transform business operations, Linux operates side by side with HP-UX and Microsoft Windows in complex heterogeneous environments. And for more than a decade, the platform of choice for running business-critical Linux has been HP. With extensive experience delivering Linux solutions, you can trust HP to help you achieve greater cost-efficiency, scalability, reliability and performance than ever before—both in the data center and the cloud. Suitable for large enterprises through smaller businesses, HP’s open-source community and commercial Linux distributions run on standards-based HP Converged Infrastructure—able to deliver any workload, anywhere, at any time. You can choose the Linux solution that best suits your needs today, and evolve your environment as your needs change.

Raspberry Pi and Mono – Hello World! OK, it has to be done. The first article you write about anything new has to contain the immortal words “Hello World”. This article explains the process of getting Mono set up on a Raspberry Pi, then compiling and running your first application. But first, a bit of a sales pitch… Why would a C# developer want to use a Raspberry Pi? It’s fantastic for embedded projects, uses little power and costs peanuts.It’s got great connectivity, it’s easy to add storage with external disks, a webcam or two, a wifi dongle and cellular connectivity – so the Raspberry Pi is the perfect platform for an Appliance application.