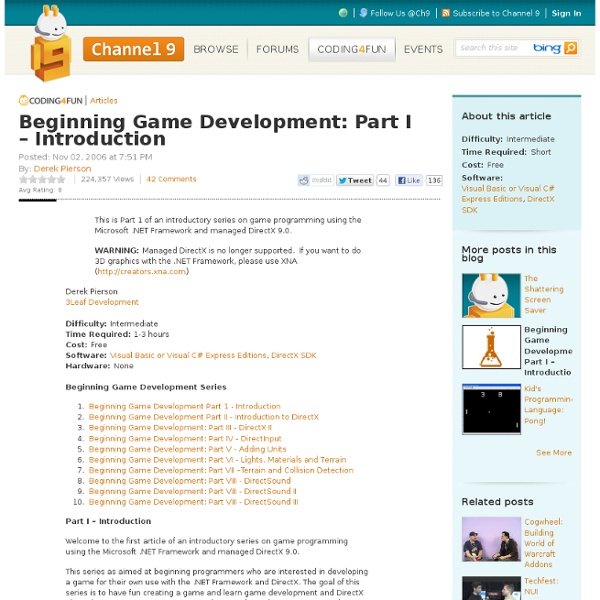 Part I – Introduction Welcome to the first article of an introductory series on game programming using the Microsoft .NET Framework and managed DirectX 9.0. This series as aimed at beginning programmers who are interested in developing a game for their own use with the .NET Framework and DirectX. The goal of this series is to have fun creating a game and learn game development and DirectX along the way. Game programming and DirectX have their own terms and definitions that can be difficult to understand, but after awhile, you’ll crack the code and be able to explore a new world of possibilities. I will keep things as straightforward as possible and decode terms as they appear. In this series, we are going to build a simple game to illustrate the various components of a commercial game. Tools: Before we start writing our first game we need to talk about the tools we will use. The most important tool for any developer is the Integrated Development Environment (IDE). Our Game idea: Visual C#

Zen and the Art of the Fireball& So it is said that if you know your enemies and know yourself, you can win a hundred battles without a single loss. If you only know yourself, but not your opponent, you may win or may lose. If you know neither yourself nor your enemy, you will always endanger yourself. - Sun Tzu A party lives and dies by teamwork. Too often, the failure of one creates the failure of many. 35 Funny Marvel Disney Mashups Artwork Disney has recently announced to acquire Marvel Entertainment Inc. for $4 billion by the end of the year. Both companies have approved the transaction, leaving some details remained to confirm. The moment I heard the news, hit discussions had been drawn off by Marvel fans, and Disney fans. Artists also expressed their feelings on the news. Mickey Mouse is swinging around in Spider Man costume, and Spider Man sighing with Mickey Mouse ears.

UPDATED – Using Googles Full Capabilities « XBOX, XBOX 360, PS2, PS3, PSP, & MORE! – Your source for the latest in console modding. Here is an updated version of the ‘Using Google’s Full Capabilities’. This is basically a master list found on a Russian hacking website. To save you the dangers of going there, we’ve compiled it here. Enjoy. Become a Programmer, Motherfucker If you don't know how to code, then you can learn even if you think you can't. Thousands of people have learned programming from these fine books: Learn Python The Hard Way Learn Ruby The Hard Way Learn Code The Hard Way I'm also working on a whole series of programming education books at learncodethehardway.org.

Beginning Game Development: Part VIII - DirectSound (Channel 9) Welcome to the eighth article on beginning game development. We have spent a lot of time working with the graphics capabilities of DirectX. We also covered how the DirectX API allows us to control input devices. The Most Important Algorithms (Survey) After a long discussion with some of my RISC colleagues about what the 5 most important algorithms on the world are, we couldn't reach a consensus on this question. So I suggested to perform a little survey. The criterion for suggestions was that these algorithms should be widely used. Further we restrict ourselves to the fields of computer science and mathematics.

Concept Racing Car Design GreenGT Twenty-4 GreenGT is one of the radically eco-friendly auto companies from Switzerland. It recently released its latest new concept named Twenty-4. It is a magnificent all electric car designed by 5 students from the CCi du Valenciennois in France. The outstanding prototype is made of carbon fiber chassis as well as a fiber glass body, and is expected to take part in 24 hour Le Mans race in France scheduled in 2011 though it is still under construction. The GreenGT Twenty-4 engineers have revealed the first performance figures of the car. prog.lang There are so many programming languages available that it can be very difficult to get to know them all well enough to pick the right one for you. On the other hand most men know what kind of woman appeals to them. So here is a handy guide for many of the popular programming languages that describes what kind of women they would be if programming languages were women. Assembler - A female track star who holds all the world speed records. She is hard and bumpy, and so is not that pleasant to embrace. She can cook up any meal, but needs a complete and detailed recipe.

Lets Code ... an MMO! Introduction My name is Michael Goodfellow. The first time I touched a computer was probably in 1971, and I immediately wanted to know how to program it. I worked in the software industry from 1975 to 2005, when I retired on disability. Windows Phone Design Tips #3 - Ubelly A panorama can be the initial window to your application, it can help to surface top level pieces of information with the aim of getting users interested in your content and to encourage them to discover more. You can decide for yourself how many panes you can place into your panorama but you need to be careful not to push too much information. There are two reasons for this, firstly, because the user scrolls round the panoramas in a loop, if there are too many panes they can get lost within the narrative of your application and forget when they’ve come back round to the start. Secondly, there can be a hit on performance if the application is trying to display too much information within one panorama.