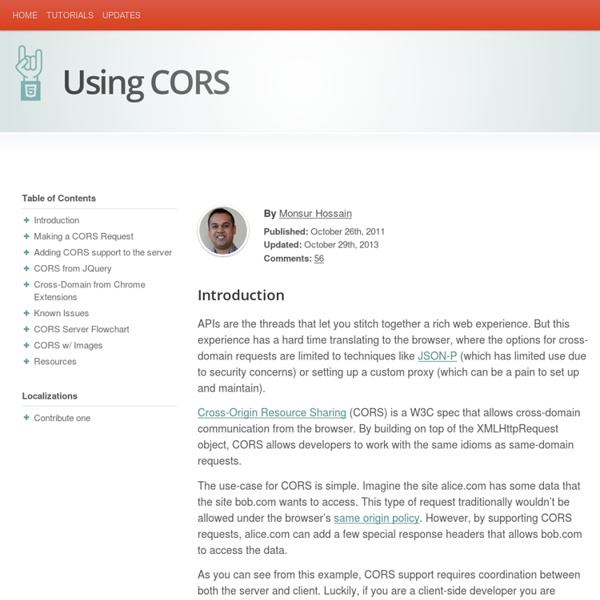 Introduction APIs are the threads that let you stitch together a rich web experience. But this experience has a hard time translating to the browser, where the options for cross-domain requests are limited to techniques like JSON-P (which has limited use due to security concerns) or setting up a custom proxy (which can be a pain to set up and maintain). Cross-Origin Resource Sharing (CORS) is a W3C spec that allows cross-domain communication from the browser. By building on top of the XMLHttpRequest object, CORS allows developers to work with the same idioms as same-domain requests. The use-case for CORS is simple. As you can see from this example, CORS support requires coordination between both the server and client. Making a CORS Request This section shows how to make a cross-domain request in JavaScript. Creating the XMLHttpRequest object CORS is supported in the following browsers: Chrome, Firefox, Opera and Safari all use the XMLHttpRequest2 object. Event handlers withCredentials Resources

Moment.js | Home Cross domain javascript, lessons learned Since the time I've started at Twilio, I've been tasked with improving a web user interface of one of the internal services.The service consists of a REST API that is used by the web UI and a number of other clients. To better separate concerns, I've decided to build the UI as an HTML5 application communicating directly to the REST API and since I wanted to develop locally, without having to run my version of the API, I decided to enhance it a bit to make it Cross-Origin Resource Sharing specification (CORS) complaint. This post is my practical overview of CORS. note The techniques described in this blog post won't work with older browsers. Simple CORS communication Let's assume that our web UI is running on localhost and our API is served from api.example.com. When browser sends request to a different origin, it adds the Origin header like so: GET / HTTP/1.1 Host: api.example.com Accept: text/html User-Agent: Mozilla/5.0 (Macintosh) Origin: localhost With me so far? CORS with Basic Auth

HTTP access control (CORS) - HTTP A resource makes a cross-origin HTTP request when it requests a resource from a different domain than the one which the first resource itself serves. For example, an HTML page served from makes an <img> src request for Many pages on the web today load resources like CSS stylesheets, images and scripts from separate domains. For security reasons, browsers restrict cross-origin HTTP requests initiated from within scripts. For example, XMLHttpRequest and Fetch follow the same-origin policy. So, a web application using XMLHttpRequest or Fetch could only make HTTP requests to its own domain. The Cross-Origin Resource Sharing (CORS) mechanism gives web servers cross-domain access controls, which enable secure cross-domain data transfers. This article is for web administrators, server developers, and front-end developers. This cross-origin sharing standard is used to enable cross-site HTTP requests for: Overview Simple requests Origin See also

Active Record Associations 1 Why Associations? Why do we need associations between models? Because they make common operations simpler and easier in your code. For example, consider a simple Rails application that includes a model for customers and a model for orders. Now, suppose we wanted to add a new order for an existing customer. Or consider deleting a customer, and ensuring that all of its orders get deleted as well: With Active Record associations, we can streamline these - and other - operations by declaratively telling Rails that there is a connection between the two models. With this change, creating a new order for a particular customer is easier: Deleting a customer and all of its orders is much easier: To learn more about the different types of associations, read the next section of this guide. 2 The Types of Associations In Rails, an association is a connection between two Active Record models. belongs_tohas_onehas_manyhas_many :throughhas_one :throughhas_and_belongs_to_many 2.2 The has_one Association

Underscore.js jQuery XDomainRequest plugin Cross-Origin Resource Sharing Abstract This document defines a mechanism to enable client-side cross-origin requests. Specifications that enable an API to make cross-origin requests to resources can use the algorithms defined by this specification. If such an API is used on resources, a resource on can opt in using the mechanism described by this specification (e.g., specifying Access-Control-Allow-Origin: as response header), which would allow that resource to be fetched cross-origin from Status of this Document This section describes the status of this document at the time of its publication. This document has been reviewed by W3C Members, by software developers, and by other W3C groups and interested parties, and is endorsed by the Director as a W3C Recommendation. If you wish to make comments regarding this document, please send them to public-webappsec@w3.org (subscribe, archives). Table of Contents 1 Introduction 2 Conformance The .

Active Record Migrations 1 Migration Overview Migrations are a convenient way to alter your database schema over time in a consistent and easy way. They use a Ruby DSL so that you don't have to write SQL by hand, allowing your schema and changes to be database independent. You can think of each migration as being a new 'version' of the database. A schema starts off with nothing in it, and each migration modifies it to add or remove tables, columns, or entries. Active Record knows how to update your schema along this timeline, bringing it from whatever point it is in the history to the latest version. Here's an example of a migration: This migration adds a table called products with a string column called name and a text column called description. Note that we define the change that we want to happen moving forward in time. On databases that support transactions with statements that change the schema, migrations are wrapped in a transaction. There are certain queries that can't run inside a transaction. generates

How to return the response from an Ajax call? Tomcat CORS Filter The CORS Filter can be run with no additional configuration in most situations. By default it operates in public mode, informing the browser that: Requests from any origin are accepted. If the default public CORS mode doesn't satisfy your requirements, you can override it by specifying your own configuration. The CORS Filter applies the following precedence when resolving the configuration properties: Checks for a cors.configurationFile system property and if it's defined loads the CORS Filter properties file from the referenced location (must be relative to the web application root directory, e.g. For example, here is a web.xml snippet to allow CORS requests from the origin only: <filter><filter-name>CORS</filter-name><filter-class>com.thetransactioncompany.cors.CORSFilter</filter-class><init-param><param-name>cors.allowOrigin</param-name><param-value> cors.allowOrigin = Configuration parameters

Cross-Domain Requests with CORS Cross-Origin Resource Sharing (CORS) is a powerful technology for static web apps. To understand what it is and why it's important, you first need to understand a bit about how browsers work. The Same-Origin Policy The Same-Origin Policy restricts the browser from performing certain actions by scripts or documents based on the origin. A parent document can't access the contents of an <iframe> that comes from a different origin. The Same-Origin Policy is a vital piece of web security architecture, but it also poses a problem. Enter Cross-Origin Resource Sharing CORS allows you to more cleanly separate your front-end from your back-end. If you are building an application using a third-party data provider or an API that already supports CORS, there isn't much else you need to know! Implementing CORS CORS is a group of special response headers sent from the server that tell a browser whether or not to allow the request to go through. Access-Control-Allow-Origin:

Active Record Query Interface If you're used to using raw SQL to find database records, then you will generally find that there are better ways to carry out the same operations in Rails. Active Record insulates you from the need to use SQL in most cases. Code examples throughout this guide will refer to one or more of the following models: All of the following models use id as the primary key, unless specified otherwise. Active Record will perform queries on the database for you and is compatible with most database systems (MySQL, PostgreSQL and SQLite to name a few). 1 Retrieving Objects from the Database To retrieve objects from the database, Active Record provides several finder methods. The methods are: bindcreate_withdistincteager_loadextendingfromgrouphavingincludesjoinslimitlocknoneoffsetorderpreloadreadonlyreferencesreorderreverse_orderselectuniqwhere All of the above methods return an instance of ActiveRecord::Relation. The primary operation of Model.find(options) can be summarized as: 1.1.1 find 1.1.2 take :start