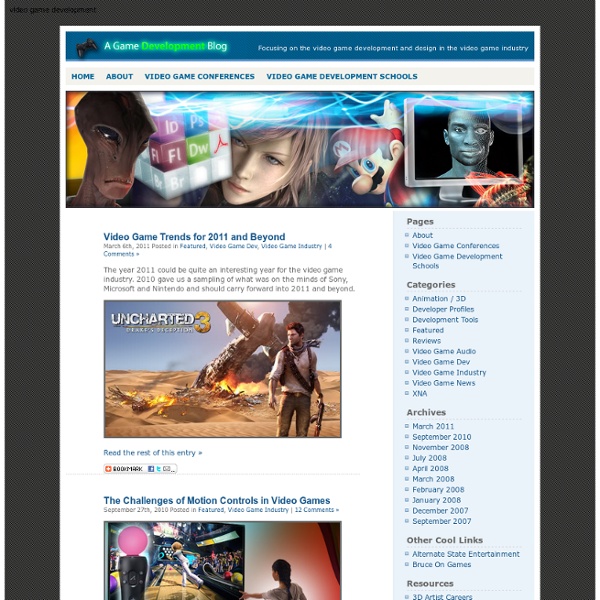 November 17th, 2008 Posted in Reviews, Featured | No Comments » A Digital Dreamer takes a close look at this gem of a PS3 game that every designer should take the time to play. We had heard a lot of great things about LittleBigPlanet for the Playstation 3 months before it was released. We heard things like the way the characters were designed and showed emotions brought instant smiles on the faces of pretty much anyone who had a chance to play it. We had heard about great looking levels, multiplayer interaction, and creation aspects of the game. Little did we know… Little did we know… Getting down to the most basic elements of the game, LittleBigPlanet is essentially a 2D side scrolling adventure. Read the rest of this entry »

Opinion: Indie Game Design Do-s and Don't-s: A Manifesto [Veteran indie game creator Edmund McMillen, known for his work on 2005 IGF Grand Prize winner Gish, Time Fcuk, and Super Meat Boy for WiiWare, shares his opinions and manifesto on making indie games, with 24 clear do-s and don't-s to make your art thrive.] One of the most common questions I'm asked in interviews is, "Do you have any advice for independent game developers who are new to the scene, or tips for developers in general?" Well, I actually answered it this time: I came up with this list of indie do-s and don't-s. Now, I'm going to make clear that I'm not perfect and I'm sure as the years go by this list will change. But from where I stand right now, having made independent art/games for a living for the past 10 years, the advice below is crucial to all indie game designers, and all artists for that matter. Also note that when I refer to a "designer" or "artist," I include programmers. The creative is visible in the work as a whole rather than in the specifics. 1. 2. 3. 4. 5. 6.

Games from Within | So You Want to Be a Game Programmer? I often get email from people looking to get their first job in the game industry asking me for advice. What are companies looking for in candidates for entry-level programming positions? How come it’s so difficult to land a job? I can’t answer for the industry as a whole, but I can certainly tell you what I am looking for when trying to fill an entry-level programmer position. A few weeks ago, Joel wrote an article with advice for college students looking to become programmers. Specifically, I’m going to concentrate on the case of someone without any previous industry development experience applying to game companies for the first time, possibly straight out of college. The type of job openings you’ll be looking for are usually referred to as junior programmer, entry-level programmer, associate programmer, or something similar. What exactly am I looking for, then, in an entry-level programmer candidate? Enthusiasm. How do you show this enthusiasm of yours? Always learning. Plays games.

Indie-Resource.com s Blog » Indie games as a business As Psychoavatar is winding up, I'm back into "business" mode. I have a good amount of experience in running Near Death Studios, so I know to avoid pitfalls like taking on too much overhead too early. I've also started considering business opportunities and haven't put marketing ideas off until the last minute. In my daily reading, I've been seeing more articles about independent game development, particularly about business. Another article requires a bit more delving but also provides insight into the next step: making a living from your game. From a the very simplest point of view, your business is defined by two values: your income you receive and the expenses you pay. Things get murkier when you try to expand from this. The other issue to note is the Child's Play donation. Finally, it's important to look at income as well. Not to pick on Mr. What insights do you get from that article?

Indiegames.com - showcasing the best in independent games. eco-footprint TIGSource Peerbackers | crowdfunding big ideas Indiegamer Developer Discussion Boards - Powered by vBulletin Fundhaus: Discover Kickstarter projects you'd never see otherwise. Channel surf the most creative corner of the web. Ludum Dare Ludum Dare 29 Theme Slaughter!! April 10th, 2014 1:16 pm With over 3000 themes suggested by the community, how do we make that more manageable? With this! It’s like hot-or-not for Ludum Dare themes. Next week we kick off Warmup Weekend (April 19th-20th), and begin main Theme Voting. Special thanks again to Sorceress for preparing the theme list for me. I’m in! April 14th, 2014 3:44 am Sorry for the choppiness. Anyway, I’m in! I’m in as well April 14th, 2014 12:34 am 2nd time LD for me. Will be using C++ and probably the SFML library. Good luck everyone! My third Ludum Dare! April 13th, 2014 9:11 pm Hello, This will be my third ludum dare and I am exited! This time I am making an accessibility first approach, complete code designed to run in browsers. Language: Javascript/HTML5Editor: Sublime? I have just tried Phaser and it looks really good. Have fun and make great games. LD 29… I am IN! April 13th, 2014 8:53 pm As customary, Tools IDE: Eclipse Image Editor: Gimp 2 Libraries: Personal In! Tools: I’m in!

Crowd-funding Site Offers Open Alternative to Kickstarter Crowd-funding website Crowdtilt officially launched on Friday, expanding upon the collective fundraising model pioneered by Kickstarter to enable raising money for any project -- even a beer blitz. Like Kickstarter, Crowdtilt allows users to create a fundraising campaign with a tipping point. If the effort falls short of the set amount, would-be donors are not charged. However, unlike Kickstarter, the platform allows users to "group fund anything." Users can initiate campaigns without first getting the approval of service administrators, which they must do on Kickstarter. The site initially launched in Austin and Dallas, Texas, in private beta several months ago. Initially, Beshara intended the site to help charities raise money, which Kickstarter prohibits. One couple paid for their wedding using the crowd-funding service. "We've taken our favorite elements from various crowd-funding platforms, and provided them for groups of friends," Beshara said.