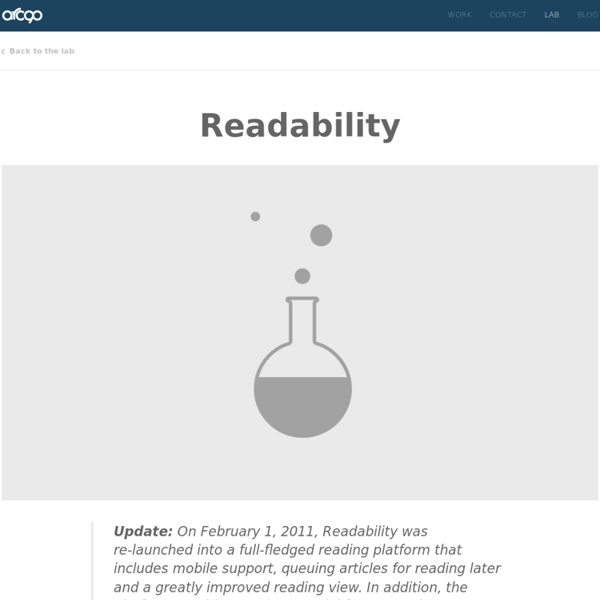 Update: On February 1, 2011, Readability was re-launched into a full-fledged reading platform that includes mobile support, queuing articles for reading later and a greatly improved reading view. In addition, the platform provides a unique model for supporting publishers and writers through your reading activity. Visit to learn more. Reading anything on the Internet has become a full-on nightmare. As media outlets attempt to eke out as much advertising revenue as possible, we’re left trying to put blinders on to mask away all the insanity that surrounds the content we’re trying to read. It’s almost like listening to talk radio, except the commercials play during the program in the background. Recently, Mandy Brown wrote a wonderful article for A List Apart called In Defense Of Readers. Despite the ubiquity of reading on the web, readers remain a neglected audience. Mandy is spot on – and her concerns are even more salient in today’s cram-all-the-ads-on-one-page Web.

The Science of Decision-Making &amp; the Art of Choice by Maria Popova The psychology of spaghetti sauce and why too many jams make you lose your appetite. Why are you reading this? How did you decide to click the link, load the page and stay? How do we decide to do anything at all and, out of the myriad choices we face each day, what makes one option more preferable over another? This is one of the most fundamental questions of the social sciences, from consumer psychology to economic theory to behavioral science. Temperament Website - Portrait of the Idealist® Healer (INFP) Healers present a calm and serene face to the world, and can seem shy, even distant around others. But inside they're anything but serene, having a capacity for personal caring rarely found in the other types. Healers care deeply about the inner life of a few special persons, or about a favorite cause in the world at large. And their great passion is to heal the conflicts that trouble individuals, or that divide groups, and thus to bring wholeness, or health, to themselves, their loved ones, and their community. Healers have a profound sense of idealism that comes from a strong personal sense of right and wrong.

Google Maps Screen reader users: click here for plain HTML +You Search Great TV sponsorship creativity : Sponsorship &amp; branded content : TV Toolbox : Thinkbox Getting closer to content Viewers love television and they can’t get enough of it. According to figures from the Broadcasters’ Audience Research Board (BARB), in 2013 the average TV viewer watched 3 hours and 52 minutes of live, linear TV a day of which two thirds (66%) was to commercial TV

The Single Truest Political Rant Ever to Appear on Morning Television This makes me feel a little more sane, if only for a moment. He nails the fact that all this hatred and fear mongering of 'the other' is just to pin a target on the face of a large nebulous sector - because it offers ratings and a place for angry, confused people to pour their frustration with their own situations. Everyone loves a scapegoat or two. And it's terrifying how easy it is direct a population like that, and the staggering amount of power this allows radicals like Beck or O'Reily - who would, in a natural environment, have about as much clout as someone yelling at you on the street. It's the stuff that rivals elected officials. Which could be a good thing - it could be incredible... if it wasn't so charged with vitriol and primarily veiled to slide the scale back from the Democrats to the Republicans in that eternal waddle.

Can &#039;double screening&#039; help TV producers? The final episode of Lost in May was one of the world's great TV experiences – 59 countries either simulcast the show or showed it the same day. The epic fantasy adventure wound up after 121 hours of television, screened in 220 countries, with a two and a half hour special that pulled in 13.5 million viewers in the US alone. The series had always been a darling of the online world, so when its co-creator Damon Lindelof started talking about the internet when accepting an award, it seemed likely he would thank people for their dedication or explain how they had built the fan base.

The BBC has a duty to be distinctive Car Booty: the type of daytime show criticised by the BBC Trust in its review. Photograph: BBC/Leopard Films The recently negotiated licence fee settlement, which will last for the remaining six years of our current royal charter, has predictably been the source of much debate. What is clear is that while the settlement gives the BBC certainty and stability, it is tough and will mean some difficult choices. Mamihlapinatapai The word Mamihlapinatapai (sometimes spelled mamihlapinatapei) is derived from the Yaghan language of Tierra del Fuego, listed in The Guinness Book of World Records as the "most succinct word", and is considered[by whom?] one of the hardest words to translate. It allegedly refers to "a look shared by two people, each wishing that the other will offer something that they both desire but are unwilling to suggest or offer themselves.

Classes - Gym In London Great Portland Street Water Aerobics Using water for resistance this fun low-impact class offers an aerobic workout without putting added pressure on vulnerable joints. Benefit from burning 300 calories per class per hour. A spinning class like no other, RPM delivers a choreographed group cycling workout to motivating music. Take on the terrain with your inspiring team coach who leads the pack through hills, flats, mountain peaks, time trials, and interval training designed to burn 675 calories per class and tone.