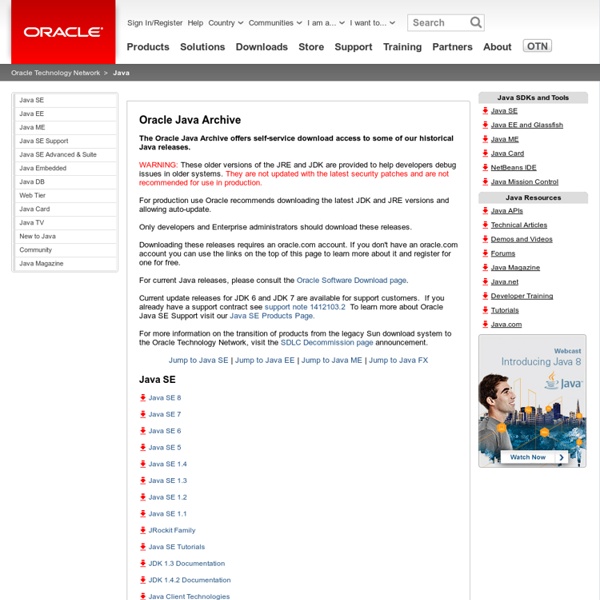 Tracing and Logging Tracing and Logging includes the following topics: Tracing Tracing is a facility to redirect any output in the Java Console to a trace file. Java Plug-in Tracing can be turned on by enabling the property javaplugin.trace. 0 â€” off1 â€” basic2 â€” network, cache, and basic3 â€” security, network and basic4 â€” extension, security, network and basic5 â€” LiveConnect, extension, security, network, temp, and basic This enables tracing on the fly. Another way to set fine-grained tracing is through the Java Control Panel. -Djavaplugin.trace=true -Djavaplugin.trace.option=basic|net|cache|security|ext|liveconnect|temp Tracing set through the Control Panel will take effect when the Plug-in is launched, but changes made through the Control Panel while a Plug-in is running will have no effect until restart. Java Web Start To set the initial trace level for a Java Web Start application set the deployment property deployment.trace.level. basiccachenetsecurityextliveconnect Logging Other Options File Names

Debug Java applications remotely with Eclipse Remote debugging can be useful for application development, such as developing a program for a low-end machine that cannot host the development platform, or debugging programs on dedicated machines like Web servers, whose services cannot be shut down. Other examples include Java applications running with limited memory or CPU power, such as mobile devices, or developers wanting to separate the application and development environments, etc. Prerequisites If you don't have it already, download Eclipse V3.4 (Ganymede). In Ganymede, the socket listening connector has been added to the Remote Java Application launch-configuration type. To use remote debugging, Java Virtual Machine (JVM) V5.0 or later must be used, such as IBM® J9 or Sun Microsystems' Java SE Development Kit (JDK). JPDA introduction Sun Microsystems' Java Platform Debugger Architecture (JPDA) technology is a multitiered architecture that allows you to debug Java applications in all situations easily. Listing 1. -Xdebug transport

Write thread-safe servlets If you write Web applications in Java, the servlet is your best friend. Whether you write Java ServerPages (JSP) or plain servlets, you are both at the servlet's mercy and the lucky recipient of what the servlet has to offer. So let's look closer at the servlet. As we know, when building a Website, we are primarily interested in the servlet's two methods: doPost() and doGet(). A thread is a single execution process; in other words, an individual, sequential flow of control within a program. So what do we mean by thread-safe, you ask? What happens when Thread-A examines variable instanceVar? Your servlet container is no dummy A lot of magic happens between the Web browser's HTTP request and the code we write within the doGet() and doPost() methods. The servlet's lifecycle is an important topic, and thus, you will find it on Sun's Java certification exam. The servlet container not only handles the servlet's lifecycle, it also does a fine job at it. Are you thread-safe?

Animal Sniffer - Animal Sniffer CLI What is this? This simple command line tool looks at Java class files and determine the format version number. The common use case of this tool is to figure out what is the offending jar file when you see UnsupportedClassVersionError. Usage This tool can accept any number of: Class filesJar filesDirectories When directories are given, they are recursively scanned for class files and jar files. The tool produces output like the following, so use the grep command to filter out the list: Use static imports rarely Static imports allow the static items of one class to be referenced in another without qualification. Used indiscriminately, this will likely make code more difficult to understand, not easier to understand. Example import java.util.*; import static java.util.Collections.*; public final class StaticImporter { public static void main(String... aArgs){ List<String> things = new ArrayList<>(); things.add("blah"); List<String> syncThings = synchronizedList(things); } } An example in which a static import is likely acceptable is a constants class. More generally, a business application might define a constants class, and import it statically.

The new Java Caching Standard (javax.cache) This post explores the new Java caching standard: javax.cache. How it Fits into the Java Ecosystem This standard is being developed by JSR107, of which the author is co-spec lead. JSR107 has draft status. Adoption Vendors who are either active members of the expert group or have expressed interest in implementing the specification are: Terracotta – EhcacheOracle – CoherenceJBoss – InfinispanIBM – ExtemeScaleSpringSource – GemfireGridGainTMaxGoogle App Engine Java Terracotta will be releasing a module for Ehcache to coincide with the final draft and then updating that if required for the final version. Features From a design point of view, the basic concepts are a CacheManager that holds and controls a collection of Caches. Optional Features Rather than split the specification into a number of editions targeted at different user constituencies such as Java SE and Spring/EE, we have taken a different approach. Firstly, for Java SE style caching there are no dependencies. Getting the Code

SSL Connection with Java « Ady Wicaksono Daily Activities Here is an example Java code to create SSL connection between you and HTTPS (taken from You can compile & run it: $ javac HTTPSClient.java $ java HTTPSClient login.yahoo.com But wait, if HTTPS server give you certificate which is signed by “unknown” Certificate Authority ( I mean not signed by approved CA like Thawte, Verisign) then you will get this error javax.net.ssl.SSLHandshakeException: sun.security.validator.ValidatorException: PKIX path building failed: sun.security.provider.certpath.SunCertPathBuilderException: unable to find valid certification path to requested target or something like it javax.net.ssl.SSLHandshakeException: sun.security.validator.ValidatorException: No trusted certificate found However, I found the fast solutions (I forget where was it, but I started from Google) so all certificates (signed and unsigned) become accepted and the exception disappears. Like this: Like Loading...

Detect internet Connection using Java Home — Project Kenai Compiling and Running Java Programs Compiling Java Source Code Before the Java virtual machine (VM) can run a Java program, the program's Java source code must be compiled into byte-code using the javac compiler. Java byte-code is a platform independent version of machine code; the target machine is the Java VM rather than the underlying architecture. % javac -g Foo.java The -g command line option is optional, but we recommend using it as it makes debugging easier. If there are no errors in your source file, the Java compiler will produce one or more .class files (one .class file for each class defined in the Foo.java source file). Every public class that you write must be in a separate .java file where the first part of the file name is identical to the class name.