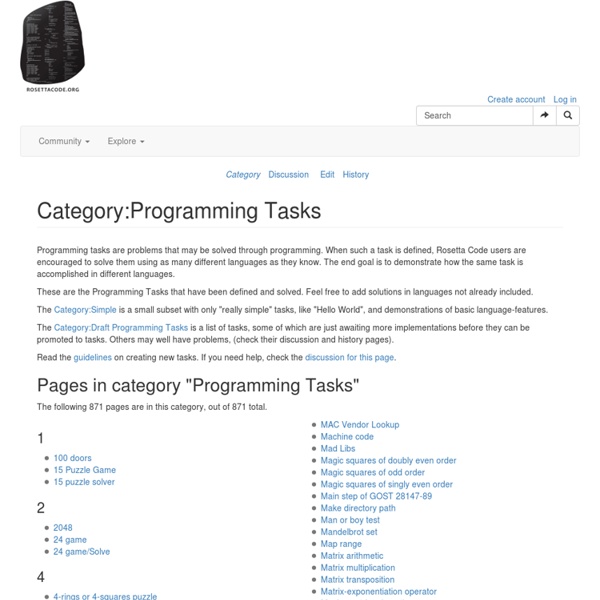 Programming tasks are problems that may be solved through programming. When such a task is defined, Rosetta Code users are encouraged to solve them using as many different languages as they know. The end goal is to demonstrate how the same task is accomplished in different languages. These are the Programming Tasks that have been defined and solved. The Category:Simple is a small subset with only "really simple" tasks, like "Hello World", and demonstrations of basic language-features. The Category:Draft Programming Tasks is a list of tasks, some of which are just awaiting more implementations before they can be promoted to tasks. Read the guidelines on creating new tasks. The following 871 pages are in this category, out of 871 total.

4 Ways to Pick Your First Programming Language If you haven’t picked your first programming language, the programming world is your oyster. Yet with evangelists for every language telling you their language is the best, choosing one to start with can be incredibly overwhelming. We’ve looked at the data for the top ten programming languages in the US (based on IEEE Spectrum data) to help you pick the best language to start with based on your priorities in lifestyle, location, and career potential. Python is a popular, well-paid language, being versatile enough to be used in many different applications, while Javascript is used widely across the country, and can be a good choice if you don’t want to relocate for a job. Although some newer programming languages, such as Swift, are not included, you shouldn’t discount the growth of their popularity. There are many factors involved in choosing your first programming language.

70 Things Every Computer Geek Should Know. The term ‘geek’, once used to label a circus freak, has morphed in meaning over the years. What was once an unusual profession transferred into a word indicating social awkwardness. As time has gone on, the word has yet again morphed to indicate a new type of individual: someone who is obsessive over one (or more) particular subjects, whether it be science, photography, electronics, computers, media, or any other field. A geek is one who isn’t satisfied knowing only the surface facts, but instead has a visceral desire to learn everything possible about a particular subject. A techie geek is usually one who knows a little about everything, and is thus the person family and friends turn to whenever they have a question. How to become a real computer Geek? Little known to most, there are many benefits to being a computer geek. You may get the answer here: The Meaning of Technical Acronyms 1. 2. If you rolled your eyes here, that is a good thing. 3. 4. 5. 6. 7.

Want to code in Fortran? Here's the very first manual! Posted in Tech blog on October 16th, 2012 by Pingdom Chances are most of you reading this have never written a single line of code in Fortran. Chances are also that most of you use systems, perhaps on a daily basis, that somehow were developed with or run on Fortran. Yesterday, October 15, it was 56 years since the very first manual for Fortran saw the light of day, and we have it available for you to download right here. Developed by IBM Fortran was developed in the 1950s by IBM. In fact, fairly recently, Fortran was called “the ideal HPC programming language”, where HPC stands for high-performance computing. The first Fortran manual Fortran was initially developed as an alternative to assembly language for IBM’s 704 mainframe computer, pictured below. The Programmer’s Reference Manual for Fortran, dated October 15, 1956 (click on the cover below to get the PDF) was written by the Applied Science Division and Programming Research Department at IBM.

Open Movie Editor - Free and Open Source Video Editor Classification of the principal programming paradigms This article appears as a chapter in , G. Assayag and A. Gerzso (eds.), IRCAM/Delatour France, 2009. The article presents and explains the most recent version of the poster. This chart is inspired by Concepts, Techniques, and Models of Computer Programming (MIT Press, 2004). This textbook presents many programming paradigms using the Oz multiparadigm programming language for its examples. The chart classifies programming paradigms according to their kernel languages. When a language is mentioned under a paradigm, it means that part of the language is intended (by its designers) to support the paradigm without interference from other paradigms. State is the ability to remember information, or more precisely, to store a sequence of values in time. Axes that are orthogonal to this chart are typing, aspects, and domain-specificity. Metaprogramming is another way to increase the expressiveness of a language.

jQuery UI Demos jQuery UI offers a combination of interaction, effects, widgets, utilities, and themes designed to work well together or on their own. Play with the demos, view the source, build a theme, read the API documentation and start using jQuery UI today. Interactions Interactions add basic mouse-based behaviors to any element. You can create sortable lists, resizable elements, drag & drop behaviors and more with just a few lines of code. Widgets Widgets are full-featured UI controls that bring the richness of desktop applications to the Web. Effects Effects add support for animating colors and class transitions, as well as providing several additional easings. Utilities Utilities used by jQuery UI to build interactions and widgets.

Introduction to GUI Programming In this topic we look at how a GUI program is assembled in a general sense, then how this is done using Python's native GUI toolkit, Tkinter. This will not be a full blown Tkinter reference nor even a complete tutorial. There is already a very good and detailed tutor linked from the Python web site. This tutorial will instead try to lead you through the basics of GUI programming, introducing some of the basic GUI components and how to use them. We will also look at how Object Oriented programming can help organize a GUI application. GUI principles The first thing I want to say is that you won't learn anything new about programming here. Most windows programming languages come with a toolkit included (usually a thin veneer over the very primitive toolkit built into the windowing system itself). Java is different in that the language includes its own graphics toolkit (called Swing) which runs on any platform that Java runs on - which is almost any platform! They all have web sites.

Guide to Faster, Less Frustrating Debugging Norman Matloff University of California at Davis (530) 752-1953 matloff@cs.ucdavis.edu ©1992-2001, N. Matloff April 4, 2002 1 Save Time and Frustration!2 General Debugging Strategies 2.1 Confirmation 2.2 Binary Search 2.3 What If It Doesn't Even Compile? 1 Save Time and Frustration! An integral part of your programming skills should be high proficiency in debugging. 2 General Debugging Strategies 2.1 Confirmation When your program contains a bug, it is of course because somewhere there is something which you believe to be true but actually is not true. Finding your bug is a process of confirming the many things you believe are true, until you find one which is not true. Here are examples of the types of things you might believe are true: You believe that at a certain point in your source file, a certain variable has a certain value. 2.2 Binary Search In this confirmation process, use a ``binary search'' strategy. 2.3 What If It Doesn't Even Compile? 3.2 Which Debugging Tools? gdb filename

The Nature of Code “That is wise. Were I to invoke logic, however, logic clearly dictates that the needs of the many outweigh the needs of the few.” — Spock In 1982, William T. Reeves, a researcher at Lucasfilm Ltd., was working on the film Star Trek II: The Wrath of Khan. Much of the movie revolves around the Genesis Device, a torpedo that when shot at a barren, lifeless planet has the ability to reorganize matter and create a habitable world for colonization. During the sequence, a wall of fire ripples over the planet while it is being “terraformed.” “A particle system is a collection of many many minute particles that together represent a fuzzy object. Since the early 1980s, particle systems have been used in countless video games, animations, digital art pieces, and installations to model various irregular types of natural phenomena, such as fire, smoke, waterfalls, fog, grass, bubbles, and so on. This chapter will be dedicated to looking at implementation strategies for coding a particle system. OK.