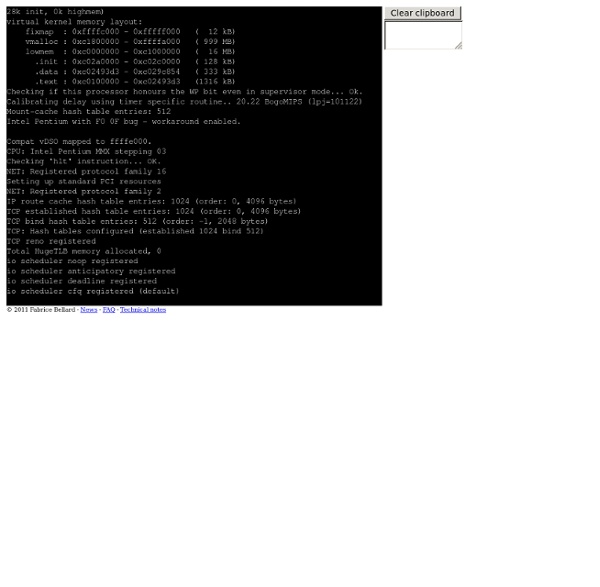 How To Run Linux On A Chromebook Spoiler - this is not breaking a chromebook into a linux box! What it is - quite simply - is proof positive that the web browser is quite capable of taking over as the primary application context for all but the most extreme human computer interaction [Yes - that does mean Microsoft are getting in right - as are Google]. It is absolutely 100% the truth that these are pictures of my Samsung Chromebook running linux. What is happening here is that it is running linux in Bellard's amazing JavaScript PC emulator. The Chromebook's chrome V8 JavaScript engine can boot this 2.6 kernel up in around 10 seconds. Howto: Linux shell restricting access By default when you add new user to system (/etc/passwd file) it grant shell access. If you are creating new users for POP3 or SMTP (mail server) or FTP then you do not need to grant shell access to a user. Remember as soon as you add a user he/she can login via telnet or ssh.

LVM HOWTO Logical volume management provides a higher-level view of the disk storage on a computer system than the traditional view of disks and partitions. This gives the system administrator much more flexibility in allocating storage to applications and users. Storage volumes created under the control of the logical volume manager can be resized and moved around almost at will, although this may need some upgrading of file system tools. The logical volume manager also allows management of storage volumes in user-defined groups, allowing the system administrator to deal with sensibly named volume groups such as "development" and "sales" rather than physical disk names such as "sda" and "sdb". One of the difficult decisions facing a new user installing Linux for the first time is how to partition the disk drive. With logical volume management, the whole disk would be allocated to a single volume group and logical volumes created to hold the / /usr and /home file systems.

Always Innovating: Introducing the Smart Book Four OS fully optimized and configured for the Beagleboard Always Innovating is pleased to announce Super-Jumbo for the Beagleboard family (also compatible with Touch Book & Smart Book). Super-Jumbo a single image which provides four operating systems fully optimized for the OMAP3 chip, and aggregates hundreds of applications already set up for you across the four major ARM operating, i.e. AIOS (complete full features Angstrom fork), Android Gingerbread v2.3, Ubuntu Maverick 10.10, and ChromiumOS (first time ever released for OMAP3). Our single kernel is compatible across the whole Beagleboard and Touch Book families. Last, Super-Jumbo includes the feature to switch at run-time between those four operating systems without any performance loss.

Samsung Series 5 3G Chromebook (Arctic White): Amazon.co.uk: Computers I bought the Samsung Chromebook because I wanted one fast-access device, with an attached keyboard, where I didn't have constant reminders about security updates and scans, to act as a supplement to my home PCs. I'd been very interested in buying one since they appeared on the market, as I'd remarked to a colleague a few years ago that netbooks would run faster if the browser alone was the operating system, and you could probably do most tasks using this - so I had already bought into the concept, as far as I know, before it was even announced. Anyway, in the following, I've compiled some points which I hope will be useful to other Amazon users.

Linux Security HOWTO This document will attempt to explain some procedures and commonly-used software to help your Linux system be more secure. It is important to discuss some of the basic concepts first, and create a security foundation, before we get started. 2.1. Why Do We Need Security?

New cool list of Linux must-have programs Update: A new, up-to-date collection is available. Please take a look! It's been approximately two years since I've written the first article, A (cool) list of Linux tools. The article proved quite popular with my audience, as it allowed Linux users, new converts in particular, a quick taste of some of the more useful programs available for Linux platforms, across a range of categories. Since, a lot has changed. Two years is a long time. Windows vs. Ubuntu’s Best Applications « Bruce’s Journal For Ubuntu, ALL software is free! On Ubuntu, all software is free. It’s also equal to, or superior to, the Windows versions. I now use loads of new software that I could not even justify the expense of buying for Windows — just to play with it, or try it out… And I mean, ALL software… like: Office Professional, Word, Excel, Powerpoint, Access, Photoshop, Quicken, Quickbooks, Microsoft Project, Adobe Illustrator, FrontPage, DreamWeaver, Nero, Avid Liquid, Final Cut Pro, video editing, backup, …you name it! EVERYTHING …except anti-virus software — no such thing… (There is no such thing as a virus or spyware in Ubuntu — because, unlike Windows, Ubuntu is a secure operating system.) I’ve organized the links below like this…

Downloads Here you will find links to VirtualBox binaries and its source code. VirtualBox binaries ¶ By downloading, you agree to the terms and conditions of the respective license. Chrome OS adds ZIP file support (inches closer to being a real operating system) Google Chrome OS is often described as an operating system designed to run a single app: a web browser. But as the Chrome OS project has evolved, it’s started to take on features that help you do some of the things you’d expect to do with a desktop operating system. There’s a built-in file browser that lets you view downloaded media, photos and screenshots you take with a Chromebook, and a media player that can handle music and video from your SD card or local storage even when there’s no internet connection handy.

The "alias" command You almost certainly have speed dial set up on your home, office and mobile phone. It saves time, ensures against a failing memory and allows you to work smarter. Devotees of the command line don’t have to be left out in the cold. One of the crown jewels of GNU/Linux is that every user, be he ne’er so base, has at his or her fingertips the kind of power of which even Caligula could not dream. Learn UNIX in 10 minutes Learn UNIX in 10 minutes. Version 1.3 Preface This is something that I had given out to students (CAD user training) in years past. The purpose was to have on one page the basics commands for getting started using the UNIX shell (so that they didn't call me asking what to do the first time someone gave them a tape). This document is copyrighted but freely redistributable under the terms of the GFDL . Have an idea for this page? Send me patches, comments, corrections, about whatever you think is wrong or should be included.

Extreme Chromebook Coolness - IPad Killer For Me! With the latest updates to the chromebook (I am on the dev channel) the performance blows all netbooks out the water. Comparisons of the crbk to netbooks are now devoid of merit. How does it line up against the IPad? IPads and Chromebooks are do different things. However, they do have a big overlap. QEMU Emulator User Documentation QEMU Emulator User Documentation 1 Introduction 1.1 Features