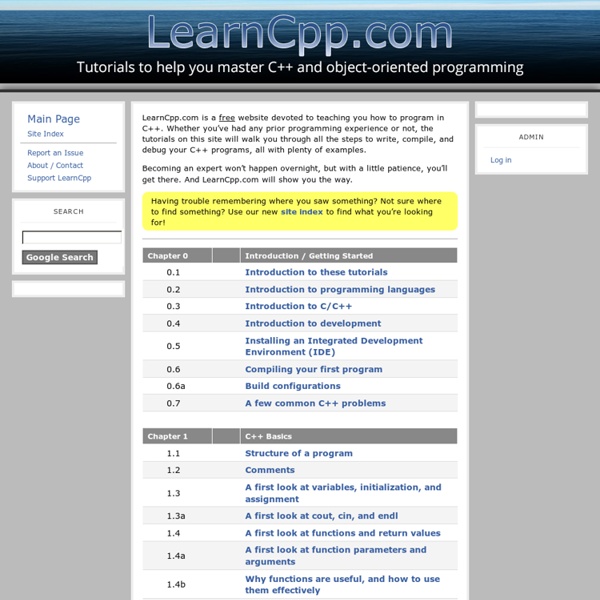 Welcome to LearnCpp.com! LearnCpp.com is a totally free website devoted to teaching you to program in C++. Whether you’ve had any prior experience programming or not, the tutorials on this site will walk you through all the steps you’ll need to know in order to create and compile your programs. Becoming an expert programmer won’t happen overnight, but with a little patience, you’ll get there. And LearnCpp.com will show you the way. Don’t miss the new tutorials on C++11 in Appendix B!

C++Interview Questions and Answers What is C++? Released in 1985, C++ is an object-oriented programming language created by Bjarne Stroustrup. C++ maintains almost all aspects of the C language, while simplifying memory management and adding several features - including a new datatype known as a class (you will learn more about these later) - to allow object-oriented programming. C++ maintains the features of C which allowed for low-level memory access but also gives the programmer new tools to simplify memory management. C++ used for: C++ is a powerful general-purpose programming language.

PHPMailer ultimate tutorial PHP have inbuilt mail() function to send email right from the code. This is easy to use and effective too but it has one serious problem. It gives load to production server and also provide no guarantee about email delivery. PHPMailer is one of the popular and easy to use email library for php. AppleScript: Beginner's Tutorial The following online materials are exerpted from the Apple Training Series book . Consider this chapter a “book within a book.” If you don't read any other chapter, read this one. It has been designed to give you a quick but thorough introduction to AppleScript through a short, fun, hands-on tutorial. In 25 minutes you’ll learn what AppleScript is, how it works, and how to write basic, functional AppleScript scripts with confidence.

Using the GNU Compiler Collection (GCC) This file documents the use of the GNU compilers. Copyright © 1988-2017 Free Software Foundation, Inc. Permission is granted to copy, distribute and/or modify this document under the terms of the GNU Free Documentation License, Version 1.3 or any later version published by the Free Software Foundation; with the Invariant Sections being “Funding Free Software”, the Front-Cover Texts being (a) (see below), and with the Back-Cover Texts being (b) (see below). A copy of the license is included in the section entitled “GNU Free Documentation License”.

Introduction - 1024cores I bet you had heard terms like "lockfree" and "waitfree". So what it's all about? Let's start with some definitions. Wait-freedom PHP Mailer Script Step by Step If you look around there are many different mailer scripts out there. Some are really complicated and hard to understand whereas some are not. Follow me through this tutorial, as I break a good script down so it's not only easy to understand, but easy to use! We're going to look at a script that I use that is simple to use and edit without extensive PHP knowledge.

5 Fun things To Do on School Computers - Pahgawks Animations - StumbleUpon November 26th, 2010 I know it's been a while, but I'm reinstating my weekly blog post policy. This week will be about something I've wanted to write about for a while: School computers! They're just too easy to hack and do fun stuff with, especially because teachers are just so incompetent with technology sometimes. Anyway, tome for the top five! 1. Diamond problem Details[edit] Multiple inheritance allows programmers to use more than one totally orthogonal hierarchy simultaneously, such as allowing Cat to inherit from Cartoon character and Pet and Mammal and access features from within all of those classes. The widespread view that multiple inheritance is “bad” or “dangerous” is not justified; most of the time, it results from experience with imperfect multiple inheritance mechanisms, or improper uses of inheritance. Well-applied multiple and repeated inheritance is a powerful way to combine abstractions, and a key technique of object-oriented software development.[2] Implementations[edit] PHP uses traits classes to inherit multiple functions.

What is DevOps? First, let’s just say there is no definitive answer. Yet. There are lots of opinions about what is covered under DevOps and what’s not. Is it a culture? Is it a job title? Is it a way of organizing?