So You Want to Be a Game Programmer? 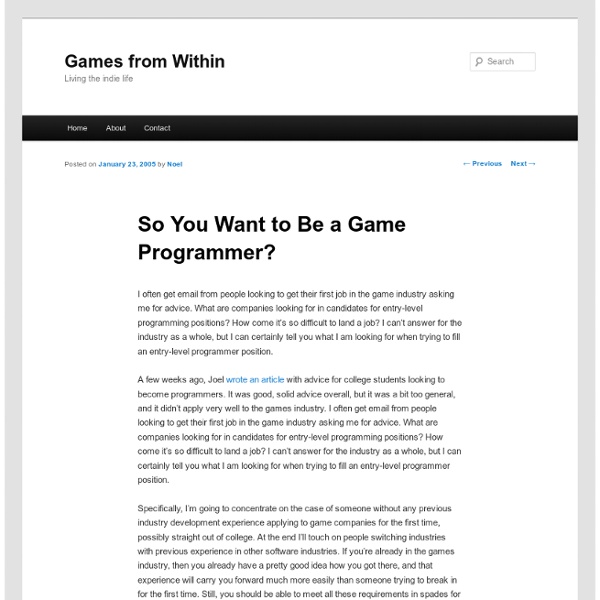 2D Game Art for Programmers Robert Boyd's Blog - So You Want to Be an Indie Game Developer? The following blog post, unless otherwise noted, was written by a member of Gamasutra’s community. The thoughts and opinions expressed are those of the writer and not Gamasutra or its parent company. So You Want to Be an Indie Game Developer? First off, enjoying the playing videogames is not the same as making them. Making games is not about the sudden burst of inspiration and brilliant ideas. Start small and work your way up. You're probably not going to make much if any money at first. Learn from your mistakes. Before you make a game, plan out the game's scope. Don't do it alone. Make games that people will want to buy. Seek feedback especially before but also after release. Spread the word. Be nice. Start now.

Code Hero raises over $100,000 for shooter that teaches computer programming Over the years, there have been a lot of efforts to create games that make learning how to program a computer simple and fun, with widely variable results. But indie developer Primer Labs seems to have hit on something special with Code Hero, a first-person shooter that teaches JavaScript and UnityScript programming by letting players fire bits of code that actually affect the environment. The group recently reached its Kickstarter funding goal of $100,000 for the project, and is still looking for last-minute donations to help fund a multiplayer mode. Despite the name, Code Hero is much more like Portal or Minecraft than Guitar Hero, according to its creators, but "instead of making blocks or portals, you shoot Javascript" that executes when it hits its target. The team has been "eating ramen or worse" to make a beta version of the game, which got an amazing response at last year's Minecraft-focused Minecon convention in Las Vegas, Peake said.

Amit’s Game Programming Information What’s on this page? I’m interested in producing complexity out of simple parts. This page contains bookmarks that I collected while working on games; I did not write most of the content linked from here. As a result the set of links here reflects the types of things I needed to know: only a few specific topics (not everything related to game programming), general ideas instead of platform-specific information (graphics, sound, compilers), and ideas and designs instead of source code (I find it easier to go from an idea to code than from code to an idea). Other sites, like Gamedev Tuts+, Gamedev, and Gamasutra, cover lots more topics than mine does. Determining how to move around on a map is an interesting problem. These pages are about specific techniques for pathfinding and object movement: My current favorite algorithm is A*, because it can handle varying terrain costs well, and it seems to be faster than most graph searching algorithms. Code and Demos Data structures Displaying Tiles

Want To Make a Video Game? Here's How! Please ensure you have JavaScript enabled in your browser. If you leave JavaScript disabled, you will only access a portion of the content we are providing. <a href="/science-fair-projects/javascript_help.php">Here's how.</a> Abstract Do you love playing video and computer games? Objective To program a simple video game that can be customized, as desired, and to determine the factors that affect the game's score. Credits Ian Slutz, Planet Moon Studios Amber Hess Sandra Slutz PhD, Science Buddies Scratch is a trademark of the Massachusetts Institute of Technology. Share your story with Science Buddies! I Did This Project! Last edit date: 2014-03-03 Introduction Note: This Science Buddies project idea was written using Scratch version 1.4. While Scratch 2 offers improvements over Scratch 1.4, the layout and some features have changed slightly. How would you like to make your very own video game? The game you will create in this science fair project is a game of chase between a cat and a dog.

30 game scripts you can write in PHP, Part 1: Creating 10 fundamental scripts Getting started As both a game master/storyteller and a developer, I frequently find myself writing little utilities and scripts to help me when running, planning, and playing games. Sometimes I need a quick idea. Other times, I just need a whole pile of names for Non-Player Characters (NPCs). Occasionally, I need to geek out on numbers, work out some odds, or integrate some word puzzles into a game. This article will explore 10 fundamental scripts that can be used in various types of games. We will blaze through these scripts pretty quickly. Back to top A basic die roller Many games and game systems need dice. In many cases, that would be more or less fine. Listing 1. function roll () { return mt_rand(1,6); } echo roll(); Then we can pass the type of die we want to roll as a parameter to the function. Listing 2. function roll ($sides) { return mt_rand(1,$sides); } echo roll(6); // roll a six-sided die echo roll(10); // roll a ten-sided die echo roll(20); // roll a twenty-sided die Summary

Want to make video games for a living? Here's how For any gamer with a creative side, the thought has probably occurred at least once: What if I could make video games for a living? But for a would-be game designer, the industry can be a tough nut to crack. For starters, the field can be insular. Back in the day, most game developers were self-taught, creating their own games or designing levels in games like "Doom." Nowadays, gaming has exploded into a multibillion-dollar industry, and there are plenty of jobs in Austin, with such major studios as Electronic Arts and Sony Online Entertainment establishing development outposts in town. But still, the industry remains a bit mysterious. Warren Spector Creator of the ‘Deus Ex' series, current head of Junction Point Studios, which designed ‘Disney Epic Mickey.' The first thing I'd say is that you have to love games. And while we're on the "loving games" topic, make sure you want to make games and not just play them. The one thing you shouldn't get hung up on is knowledge of specific tools.

Introduction to A* In games we often want to find paths from one location to another. We’re not just trying to find the shortest distance; we also want to take into account travel time. Move the blob (start point) and cross (end point) to see the shortest path. To find this path we can use a graph search algorithm, which works when the map is represented as a graph. The first thing to do when studying an algorithm is to understand the data. Input: Graph search algorithms, including A*, take a “graph” as input. Sprites by StarRavensee footer for link A* doesn’t see anything else. Output: The path found by A* is . Tradeoffs: For any given game map, there are many different ways of making a pathfinding graph to give to A*. The pathfinding graph doesn’t have to be the same as what your game map uses. There are lots of algorithms that run on graphs. I’ll start with the simplest, Breadth First Search, and add one feature at a time to turn it into A*. How do we implement this? Let’s see this up close. Distance

Getting Started How long have you dreamed of making a video game? Video game development is a substantial industry, employing over 40,000 people in North America alone. But while many people daydream about working in game development, few have the chops to follow through and take action. We know that's why you're here now: to take action. These Getting Started pages will introduce you to the world of game development by breaking down some of the complex information. If you've got the basics down, our homepage has daily news updates and feature articles to keep you in sync with the professional world. Check out our community forums, too, where you can network with fellow newbies and ask working professionals for their opinionated advice. To work in game development, you've got to have tenacity.

I Want to Make a Video Game! ... Where Do I Start? So You Want To Make a Video Game, But Have No Idea Which Direction to Run? I know how you feel, I was definitely there myself at one point. I, like you, knew I loved video games and that games were more than a pass time; games were a way of life. I am writing this series to take you through my experience with game development so that you will have a better understanding of of where to start in the video game development processes and what to look out for. It All Starts With You Sure, you love video games, but how deep does your well of love go? Before my first project I rarely ever had a fully fleshed out game idea. Most people don't have a perfectly equal spread of game experience (although many people claim they do). Guess What? I know it may not seem like much, but game development studios, large and small, spend an immense amount of time compiling lists just like you did. This Will Be A Series of Posts In case you were curious, I have a ton more to tell you!