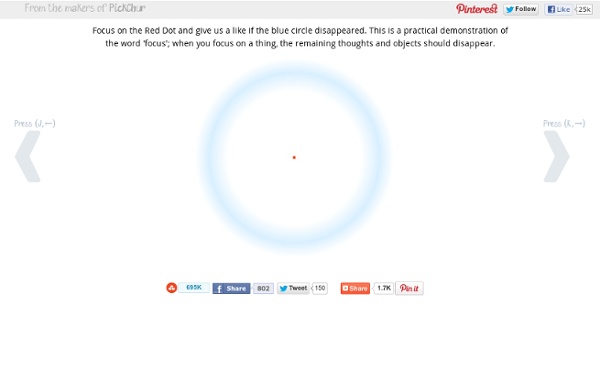 Focus on the Red Dot and give us a like if the blue circle disappeared. This is a practical demonstration of the word 'focus'; when you focus on a thing, the remaining thoughts and objects should disappear.

Throwback Thursdays: Betchiest Trends of the 90s Polly Pocket Talk about unrealistic body expectations Tamagotchi 8 Ways Magnetic Levitation Could Shape the Future - How Maglev Technology Works For years, NASA has been researching the possibility of using the high speeds of maglev transportation to fling spacecraft into low Earth orbit. "It would really open up space to human exploration and commercialization," Powell says. "It's something we can't do now because it's too expensive." Design CATable, A Multifunction Table for Humans and Curious Cats Designer Ruan Hao of architectural firm LYCS has created... Marutaro, The Most Popular Hedgehog On The Web Marutaro, the hedgehog from Japan is one of the most... 16th Century German Book Opens in 6 Ways to Reveal 6 Books

Romantic Shorts 3 - Best Romance Short Films Romance short films tend to be either optimistic or realistic. I continue to give you both types as one gives you hope and the other gives you solace. Mei by Arvin Chen (2006) (USA/Tawain) (11m) One of those sweet, understated romantic dramas, Mei is the story of a young man who works on a noodles stall run by a father and daughter. World's First Perpetual Motion Machine? Can this machine operate forever? Since at least the 12th century, man has sought to create a perpetual motion machine; a device that would continue working indefinitely without any external source of energy. A large scientific contingent thinks such a device would violate the laws of thermodynamics, and is thus impossible. Could it be that as a race, we don’t fully understand the laws of physics and such a device may indeed be possible? What would the ramifications be if we could actually build a perpetually moving device? Norwegian artist and mathematician Reidar Finsrud is an outside the box thinker that has devised a machine that he believes achieves true perpetual motion.

how to transfer a photo to fabric Did you know you can transfer photos to fabric without using iron-on sheets? I love this technique. It's simple to execute and the end results are really pretty. It's another method for hand printing! I made some fabrics the other day and used them to add pockets to one of my wool skirts. Danny Rubin: 25 Things Every Young Professional Should Know by Age 25 If you want a job straight out of college, don't come knocking on Kirk McDonald's door. The president of a tech company in New York City, McDonald wrote a brutally honest op-ed in the Wall Street Journal called " Sorry, College Grads, I Probably Won't Hire You ." He believes most college graduates don't have the one skill that's in high demand: computer programming. During our first few years in the real world, what else should we take time to learn? 25 Things Every Young Professional Should Know by Age 25 25.

6 Scientific Discoveries That Laugh in the Face of Physics As we've pointed out before, there are some startlingly simple questions that science can't answer. And then there are the special occasions where the universe up and does a freaking magic trick that seems to be designed by an unjust, all-powerful entity dedicated to making scientists slowly pull off their glasses while saying, "What in the hell?" For instance ... #6. The Sun Can Make Stuff Hotter Than Itself We intuitively understand the direction that energy travels -- from the thing with energy to the thing with less energy. JUKES DESIGN Business Cards Add This Card to your Blog (Copy & Paste) <a href=" border="0"><img src=" alt="JUKES DESIGN Business Cards" title="JUKES DESIGN Business Cards" border="0"></a><br><a href=" style="text-decoration:none; font-size:10px;" alt="Business Card Observer"><font color="#000000">Via CardObserver</font></a> These cards are an attempt to convey, not only my vital contact information, but my design philosophy; extreme minimalism, genuine materials, quality execution. Crane Lettra 220lb Fluorescent White 100% cotton stock, offset printed to allow for tonal variations in the icon and even ink coverage over large areas.

40 Of The Most Powerful Photographs Ever Taken Sisters pose for the same photo three separate times, years apart. A Russian war veteran kneels beside the tank he spent the war in, now a monument. A Romanian child hands a heart-shaped balloon to riot police during protests against austerity measures in Bucharest. Retired Philadelphia Police Captain Ray Lewis is arrested for participating in the Occupy Wall Street protests in 2011. A monk prays for an elderly man who had died suddenly while waiting for a train in Shanxi Taiyuan, China. A dog named "Leao" sits for a second consecutive day at the grave of her owner, who died in the disastrous landslides near Rio de Janiero on January 15, 2011.

IBM's Smarter Cities Billboard Campaign Billboards are meant to distract and annoy, to draw attention and to not fit in. In its recent on-street ad campaign, IBM promotes its People for Smart Cities Program with billboards that are even more invasive. Ogilvy & Mather France took the concept of the board and bent it into shapes that could – with some effort – be seen as solutions for a somewhat smarter city, London and Paris in this case. A board bends to become a bench, a rain shelter or a ramp over stairs.