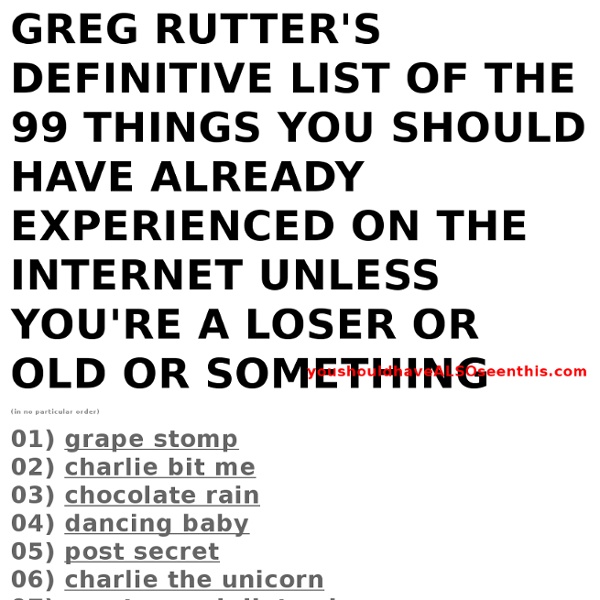 Building A Home Theater System? Do It Right! 10 Crucial Mistakes To Avoid Do an image search for “home theater” and you’ll see photo after photo of huge, lavish theaters with seating for up to twenty (or more!) and giant screens. These ideals are every tech geek’s dream, but let’s face it; most of us don’t have the money or space. Instead, home theater systems are usually placed in living rooms or, if you’re lucky, a small bedroom or office dedicated to entertainment. Home theater design in a normal room, where every element can’t be controlled, is more difficult – which leads to some common mistakes. Don’t Look Up Anti Joke What are Antijokes? Anti Jokes (or Anti Humor) is a type of comedy in which the uses is set up to expect a typical joke setup however the joke ends with such anticlimax that it becomes funny in its own right. The lack of punchline is the punchline.

Mega-canyon discovered beneath Greenland ice sheet A previously unknown canyon hidden beneath two kilometers of ice covering Greenland has been discovered by a group of scientists, led by a team from the University of Bristol. The canyon is at least 750km long and in places as much as 800m deep and is on the same scale as parts of the Grand Canyon in Arizona, USA. This remarkable, previously unknown, feature is thought to predate the ice sheet that has covered Greenland for the last few million years and has the characteristics of a meandering river channel. By comparison, the longest river in the UK, the River Severn, is about 350km long and much less wide and deep. Professor Jonathan Bamber of Bristol's School of Geographical Sciences, lead author of the study, said: "With Google Streetview available for many cities around the world and digital maps for everything from population density to happiness one might assume that the landscape of the Earth has been fully explored and mapped.

Soda Machine Hack Most modern vending machines have little computers inside. A tiny screen usually displays some information. Although relatively little known, pressing a certain combinations of buttons can control the settings. For instance, you can check the internal temperature, view the amount of money inside, empty change, or dump certain beverages. It will generally only work on new machines which is pictured on the right side.

The Most Efficient Way to Do ... Everything Let's face it: We are tragically ineffective people. Don't try to deny it. You're reading Cracked right now instead of doing literally anything else; that's proof enough right there. Luckily the Internet, the primary cause of our efficiency deficiency, might also be the cure: I've found as many quick, easy methods to streamline your life as I could threaten Google into giving me. And so you're sure there's actual merit to all of these practices, I'll also be testing them out first. The latest works The latest works "A chameleon" The "eyes" of a chameleon appear to rotate.

Cool Things About Gravity on Gravity Day - Wired Science Image: Rhett Allain Gravity Day is September 8th (9/8) which represents the constant g = 9.8 N/kg. Clearly, we should celebrate. Here are some interesting things regarding g. What is g? You might hear people call this the “acceleration due to gravity”. Miegakure: A puzzle-platforming game in four dimensions Miegakure is a platform game where you navigate a four-dimensional world to perform miraculous feats and solve puzzles. Miegakure is a puzzle-platforming game that lets you explore and interact with a four-dimensional world. The fourth dimension in this game works just like the first three: it is a mathematical generalization. Your ability to move in the fourth dimensions in addition to the usual three allows you to perform miraculous feats like seeing inside closed buildings, walking through walls, stealing objects from closed containers, binding two separate rings without breaking them, etc... These actual consequences of the mathematical formulation of 4D space have been thought about for more than a century (in the 1884 novella Flatland for example) but it is the first time anyone can actually perform them, thanks to the video game medium.

The 5 Creepiest Unexplained Broadcasts As we speak, broadcast signals are moving invisibly through the air all around you, from millions of sources. And some of them are really, really freaking weird. We know this because occasionally somebody with a shortwave radio, or a special antenna or even a common household television, will capture one of these mystery signals and suddenly start broadcasting utter insanity.

Kitchen Helpers I found these helpful charts last week and just had to share! Both of these beauties are from Chasing Delicious (aka one of the most fab foodie blogs out there)! Aren’t they faaaaabulous?! Steam Extraction of Essential Oils Considering the cost of some essential oils exceeds $400 per oz. (30 ml) and most essential oils cost about $100 per oz. I thought it would be an interesting project to experiment with home made extraction. The cost of a pre-built unit (that is only about 5 gallons) is about $1,000 however, I sat up an experiment using a 55 gallon drum - and other junk I found around the farm for $0.00. The following pictures describe the materials and process. 1.

Escher for Real The work of M.C. Escher needs no introduction. We have all learned to appreciate the impossibilities that this master of illusion's artwork presents to the layman's eye. Nevertheless, it may come as a surprise for some, but many of the so-called 'impossible' drawings of M.