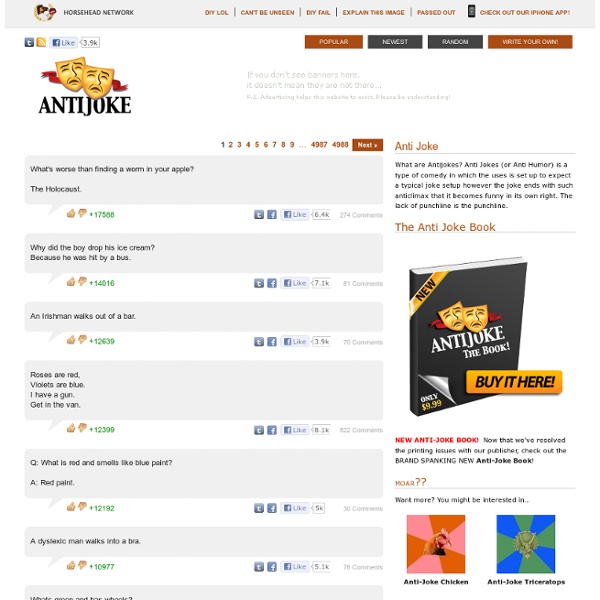 What are Antijokes? Anti Jokes (or Anti Humor) is a type of comedy in which the uses is set up to expect a typical joke setup however the joke ends with such anticlimax that it becomes funny in its own right. The lack of punchline is the punchline. We’ve just released huge update to the iOS app! Now, access all your favorite text and photo sites like Anti-Joke, DIYLOL! A few things didn’t make the original cut (like comments) but they’ll be back soon. NEW ANTI-JOKE BOOK! Want more?

Game of Life The Game The Game of Life is not your typical computer game. It is a 'cellular automaton', and was invented by Cambridge mathematician John Conway. This game became widely known when it was mentioned in an article published by Scientific American in 1970. It consists of a collection of cells which, based on a few mathematical rules, can live, die or multiply. Depending on the initial conditions, the cells form various patterns throughout the course of the game. Everyday Objects Come Alive - Part 3 Cookie Crumbs Terry Border is one of our favorite creative people on the planet. He never ceases to amaze us, as he takes boring, everyday objects and makes them come alive! What's great about his work is that it can be enjoyed by everyone. Young or old, we can all get a good chuckle out of his hilarious, bent objects. "I always knew that my weird point of view was my gift or perhaps curse, so I'm glad I finally found a use for it," Terry says.

- StumbleUpon A Thoughtful Look at Men and Women SHE DRIVES FOR A RELATIONSHIP. HE'S LOST IN THE TRANSMISSION By DAVE BARRY CONTRARY to what many women believe, it's fairly easy to develop a long-term, stable, intimate, and mutually fulfilling relationship with a guy. Of course this guy has to be a Labrador retriever. With human guys, it's extremely difficult. This is because guys don't really grasp what women mean by the term relationship. Let's say a guy named Roger is attracted to a woman named Elaine. Ten games that make you think about life At the start of this year, we decided to come up with a list of Flash casual games with a philosophical bent. To be honest, we struggled. After days of research, we could only find a handful of games that had the thought-provoking depth we were looking for. Our list (which you can view by clicking here) was therefore only five games long.