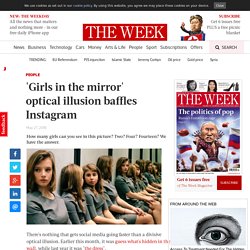 Earlier this month, it was guess what's hidden in the wall, while last year it was "the dress". Now there's a mirror image puzzle that has driven the internet up the wall. Photographer Tiziana Vergari uploaded this picture to her Instagram account but users are struggling to wrap their heads around how many girls are in this picture. How many do you see?

So far, there have been 4,000 comments on the picture and guesses range from two to 14. Artist makes Louvre Pyramid disappear in optical illusion. Museum responds to ‘abandoned glasses as art’ prank, sees the funny side. Two teenagers took the perennial “I could have made that” response to modern art to its logical conclusion this week, sticking a pair of glasses in front of a sign at the San Francisco Museum of Modern Arts and passing it off as an artwork. 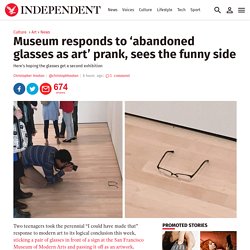 Pictures they took of people admiring and photographing the unremarkable glasses swiftly went viral, and the MoMA really had to respond. A pair of glasses were left on the floor at a museum and everyone mistook it for art. Several visitors to the San Francisco Museum of Modern Art this week were fooled into thinking a pair of glasses set on the floor by a 17-year-old prankster was a postmodern masterpiece. 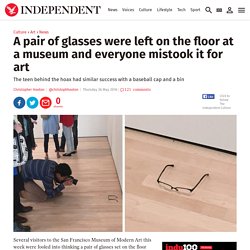 “Upon first arrival we were quite impressed with the artwork and paintings presented in the huge facility,” TJ Khayatan told BuzzFeed. “However, some of the ‘art’ wasn’t very surprising to some of us.” “We stumbled upon a stuffed animal on a gray blanket and questioned if this was really impressive to some of the nearby people.” To test out the theory that people will stare at, and try and artistically interpret, anything if it’s in a gallery setting, Khayatan set a pair of glasses down and walked away.

Soon, people began to surround them, maintaining a safe distance from the ‘artwork’ and several of them taking pictures. Torture and baby-stonings: why we need shock theatre ... in small doses. Why do we go to the theatre? 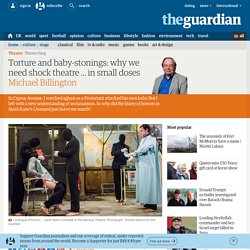 I once suggested it was for the three Es: entertainment, enlightenment and ecstasy. But it is also valuable to be periodically shocked. Several recent experiences have, however, led me to believe there is a vital distinction to be made between the moral awakening that comes from shock and the visceral impact of unmitigated horror. The most shocking play I’ve seen for a long time is David Ireland’s Cyprus Avenue, which moved from Dublin’s Abbey to the Royal Court in London. What hit me was Ireland’s unblinking portrayal of the insanity of sectarian hatred. It may be an unfair comparison but, since Sarah Kane’s Cleansed was running concurrently at the National, I couldn’t help noticing how the Kane play simply left me numb: confronted by Kane’s catalogue of horrors, including every possible variety of torture and mutilation, my reaction was one of increasing exhaustion. 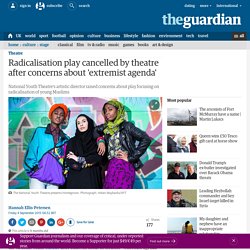 An email written by the play’s artistic director Paul Roseby argued that Homegrown, due to be staged at a school in Swiss Cottage with a cast of 15- to 25-year-olds, had to be axed last month “to prevent any damage to NYT’s reputation and membership”. Israeli theatre group has performances cancelled at Edinburgh Fringe. An Israeli theatre group that had its shows cancelled at the Edinburgh Fringe vowed on Friday to find another venue and in the mean time said they would sing in the streets "for peace". 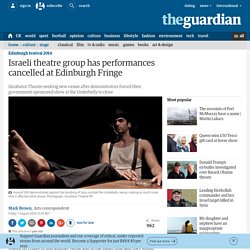 The Underbelly venue cancelled performances of Incubator Theatre's production The City – a hip hop crime fable – on Wednesday after a demonstration of around 100 outside. There had also been a letter signed by Scottish artists and writers, including the playwright David Greig and Scotland's national poet Liz Lockhead, calling for Incubator not to be allowed to perform given what is happening in Gaza: Incubator receives funding from the Israeli government. But the company's artistic director, Arik Eshet, said that his government was not funding art for political reasons.

"They fund art for art," he said. "It can be against the government, we are not censored. Eshet said they were not political people, that they came to the Fringe as artists. Israel stops children's puppet theatre show over PA link. Israel has ordered the cancellation of a children's puppet festival at a Palestinian theatre in East Jerusalem, claiming the eight-day event has been unlawfully sponsored by the Palestinian Authority. 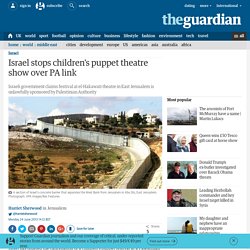 East Jerusalem is outside the PA's jurisdiction. The el-Hakawati theatre, known as the Palestinian national theatre, has been running an annual festival for children for the past 18 years. This year's event was due to begin last Saturday, with performances from Israeli-Arab theatre groups and visitors from France, Norway and Turkey. Controversial Isis-related play cancelled two weeks before opening night. Creators of a controversial play exploring why British schoolchildren are joining Islamic State claim they have been “silenced” after the show was cancelled less than a fortnight before its opening night. 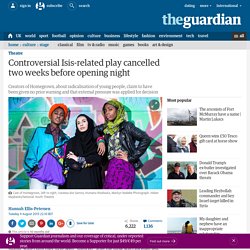 Homegrown, a National Youth Theatre (NYT) production, was closed down on Thursday, with the cast and crew given no prior warning. Writer whose radicalisation play was cancelled to get it staged elsewhere. The playwright behind Homegrown, the controversial play exploring radicalisation and jihadi brides that was shut down less than a fortnight before its opening, has confirmed he is in talks to get it staged elsewhere. 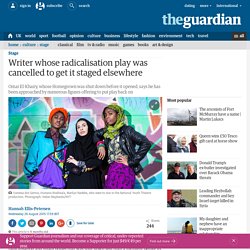 Bill Cosby cancels two Boston shows as new accuser comes forward. Bill Cosby on Sunday cancelled two stand-up comedy performances in Boston, as a former fashion model and actress said he made sexual advances and lewd gestures toward her on the set of The Cosby Show. The Wilbur Theater posted an announcement on its website on Sunday morning, saying tickets would be refunded where patrons purchased them. It apologised for the abrupt change but did not say why the two shows were cancelled. On Sunday afternoon, Helen Gumpel, formerly known as Helen Selby, said Cosby had her sit on a couch in his dressing room, where he handed her a drink then stood in front of her with his crotch in her face.

Dancer Jonathan Ollivier killed in motorbike accident hours before Sadler's Wells show. Professional dancer Jonathan Ollivier has been killed in a motorbike collision hours before he was due to perform on stage in London. Ollivier, 38, who was starring in Matthew Bourne’s The Car Man at Sadler’s Wells, died after a black Mercedes saloon struck his motorbike on Farringdon Road. The driver of the Mercedes was arrested on suspicion of causing death by dangerous driving and has been bailed to a date in February next year. Tributes were paid by family members and the dance community as it emerged Ollivier, who was married to South African principal ballerina Desiré Samaai, was pronounced dead at the scene of the collision at around 11am on Sunday.

His sister Rachel Ollivier wrote on Facebook: “To all my beautiful little bro friends, it is with a heavy heart that we have to tell you that Jon tragically died today. We love him and will miss him massively.” English dancer Bennet Gartside, first soloist at the Royal Ballet said: “So so sad to hear this today. Shows cancelled in wake of London bombs. While people struggled to get home from central London after the bombings last night, scheduled events across the West End were cancelled.

Major theatre chains cancel screenings of The Interview after '9/11' threats. Hundreds of cinemas across the United States have cancelled screenings of a controversial movie at the centre of the Sony Pictures hacking scandal following terrorist threats made to cinema-goers by the group responsible for the attack. A group calling itself Guardians of Peace (GOP) published an online message on Tuesday warning cinema goers to stay away from screenings of The Interview, a comedy starring Seth Rogen and James Franco, which depicts the assassination of North Korean leader Kim Jong-un.