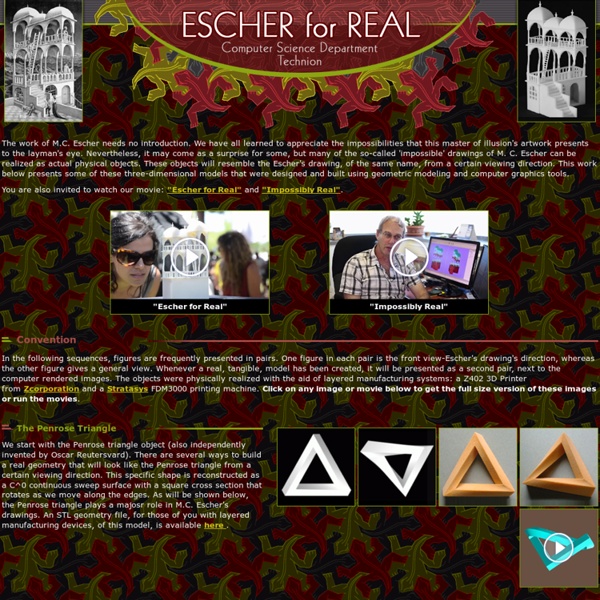 The work of M.C. Escher needs no introduction. We have all learned to appreciate the impossibilities that this master of illusion's artwork presents to the layman's eye. Nevertheless, it may come as a surprise for some, but many of the so-called 'impossible' drawings of M. C. You are also invited to watch our movie: "Escher for Real" and "Impossibly Real". "Escher for Real" "Impossibly Real" Convention In the following sequences, figures are frequently presented in pairs. The Penrose Triangle We start with the Penrose triangle object (also independently invented by Oscar Reutersvard). The Penrose Rectangle The impossible shape conveyed by the Penrose triangle is the most well-known one. The Penrose Pentagon Similarly and following the construction of a Penrose triangle and Penrose rectangle, one can easily create an arbitrary Penrose n-gon. The Penrose Triangle II Here we present another way to simulate and realize geometry that looks like the Penrose triangle from a certain view. All M.C.

Inconsistent Images | Inconsistent Images Impossible pictures are so-named not because the two-dimensional picture itself is impossible (for then there would be no picture!), but because what is depicted, an apparently three-dimensional thing, is impossible. This raises a significant puzzle: how can it be that one is able to draw a picture of a thing which cannot exist because to do so would violate the laws of logic or mathematics? One surely cannot draw a picture of a standard contradiction, such as "Snow is white and snow is not white." But impossible pictures are different: there is an experience "I see it but I don't believe it" which cries out for explication. The history of impossible pictures goes back to Pompeii. Impossible pictures should be distinguished from pictures which permit more than one gestalt, such as the duck-rabbit or the candlestick-faces. A research project conducted in the Discipline of Philosophy aims to address the issue on several fronts. Preliminary Classification of Impossible Forms

Ludwig Wittgenstein 1. Biographical Sketch Wittgenstein was born on April 26, 1889 in Vienna, Austria, to a wealthy industrial family, well-situated in intellectual and cultural Viennese circles. In 1908 he began his studies in aeronautical engineering at Manchester University where his interest in the philosophy of pure mathematics led him to Frege. Upon Frege's advice, in 1911 he went to Cambridge to study with Bertrand Russell. Russell wrote, upon meeting Wittgenstein: “An unknown German appeared … obstinate and perverse, but I think not stupid” (quoted by Monk 1990: 38f). During his years in Cambridge, from 1911 to 1913, Wittgenstein conducted several conversations on philosophy and the foundations of logic with Russell, with whom he had an emotional and intense relationship, as well as with Moore and Keynes. In the 1930s and 1940s Wittgenstein conducted seminars at Cambridge, developing most of the ideas that he intended to publish in his second book, Philosophical Investigations. 2. 3.

What is Frege’s ‘concept horse problem’? DOI:10.1093/acprof:oso/9780199665785.003.0005 Frege’s concept horse problem is often presented as inspiring what the Tractatus has to say about logical category distinctions and the say-show distinction. But what exactly is that problem; how far is it soluble, and how far did Frege suppose it soluble? The chapter argues that the problems commentators have discussed under this rubric in fact constitute a family of distinct sub-problems, some of which Frege regarded as soluble, others of which he regarded as innocuous, and yet others of which he simply ignored. Since the most acute of these sub-problems—the problem of the inexpressibility of logical category distinctions—is one with which Frege did not expressly concern himself in writings available to Wittgenstein, the Tractatus does not—contrary to Peter Geach—derive its distinctive doctrines on these matters from Frege. Oxford Scholarship Online requires a subscription or purchase to access the full text of books within the service.