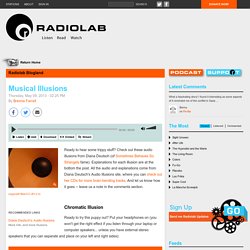 Check out these audio illusions from Diana Deutsch (of Sometimes Behaves So Strangely fame). Explanations for each illusion are at the bottom the post. All the audio and explanations come from Diana Deutsch's Audio Illusions site, where you can check out her CDs for more brain-bending tracks. And let us know how it goes -- leave us a note in the comments section. Infinite Guest Podcast Network. Centre for the Study of Perceptual Experience. Ambiguous Figures Duck/Rabbit A photographic version of the Duck/Rabbit Continuing on the animal theme: Dog/cat/mouse ambiguous figure Young Woman/Old Woman One for academics: book or cleavage? 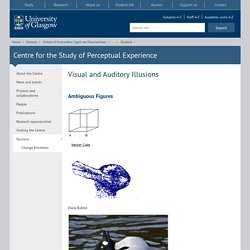 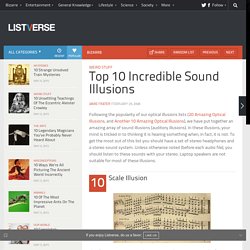 In these illusions, your mind is tricked in to thinking it is hearing something when, in fact, it is not. To get the most out of this list you should have a set of stereo headphones and a stereo sound system. Unless otherwise noted (before each audio file), you should listen to these sounds with your stereo. Audio "Optical" Illusions. This time “Mighty Optical Illusions” brings you another type of illusion. 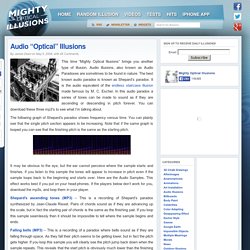 Audio illusions, also known as Audio Paradoxes are sometimes to be found in nature. The best known audio paradox is known as Shepard’s paradox. It is the audio equivalent of the endless staircase illusion made famous by M. C. Escher. Psychtalkradio. The strangest sounds in the world. “You know you were told to be nice and not to heckle?” 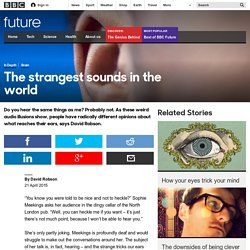 Sophie Meekings asks her audience in the dingy cellar of the North London pub. “Well, you can heckle me if you want – it’s just there’s not much point, because I won’t be able to hear you.” She’s only partly joking. Meekings is profoundly deaf and would struggle to make out the conversations around her. The Continuity Illusion. The "Law of Continuity", one of the "Gestalt rules" thought to govern perception, stipulates that our mind will tend to interpolate or extrapolate perceptual "objects" if the edges of the objects are obscured. 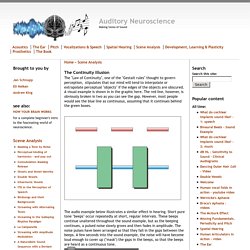 A visual example is shown in in the graphic here. The red line, however, is obviously broken in two as you can see the gap. However, most people would see the blue line as continuous, assuming that it continues behind the green boxes. The audio example below illustrates a similar effect in hearing. Short pure tone "beeps" occur repeatedly at short, regular intervals. (If you want to download the mp3 of the demo, right-click this link and choose "save as"). 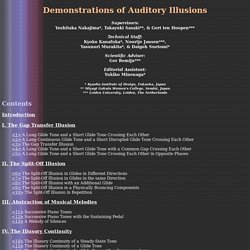 Time Perception <19> Overestimation of a Divided Time Interval <20> Time-shrinking <21> A Discontinuous Change of Time Perception Caused by Time-shrinking <22> Time-shrinking in Patterns Consisting of Three Empty Time Intervals Introduction We have made these auditory demonstrations to help understanding our research on auditory organization and time perception. Most of them were originally prepared for our research group, but we thought it might be convenient to make them accessible to other researchers. Auditory illusion: How our brains can fill in the gaps to create continuous sound. It is relatively common for listeners to "hear" sounds that are not really there. 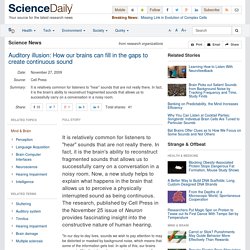 In fact, it is the brain's ability to reconstruct fragmented sounds that allows us to successfully carry on a conversation in a noisy room. Now, a new study helps to explain what happens in the brain that allows us to perceive a physically interrupted sound as being continuous. The research, published by Cell Press in the November 25 issue of Neuron provides fascinating insight into the constructive nature of human hearing. "In our day-to-day lives, sounds we wish to pay attention to may be distorted or masked by background noise, which means that some of the information gets lost. In spite of this, our brains manage to fill in the information gaps, giving us an overall 'image' of the sound," explains senior study author, Dr. Taken together, the findings reveal a novel mechanism that enhances our understanding of the constructive nature of human hearing.

Audio illusions include the Shepard tone, known as a sonic barber's pole. Illusions include the Shepard tone, also known as a ‘sonic barber's pole'It sounds like a scale that seems to be rising or falling forever with no endIn reality it's cycling between a limited set of tones, separated by an octave In another illusion, two major melodies are played one after the otherWhen played together, the scales either ascend or descend, but on their own, neither melody gives this impression By Ellie Zolfagharifard Published: 12:10 GMT, 29 January 2014 | Updated: 15:56 GMT, 29 January 2014 You might be fooled by tricks of the eye, but how about tricks of the ear? 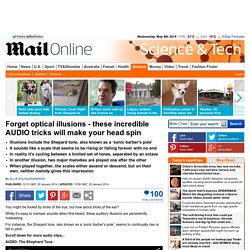 As part of our special issue on music, Daniel Levitin has written The Music Illusion, which looks at auditory illusions and how they can help us understand the workings of the human brain. 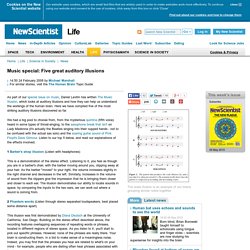 Here we have compiled five of the most striking auditory illusions discovered so far. We had a big pool to choose from, from the mysterious quintina (fifth voice) heard in some types of throat-singing, to the saxophone break that isn't on Lady Madonna (it's actually the Beatles singing into their cupped hands - not to be confused with the actual sax solo) and the soaring guitar sound of Pink Floyd's Dave Gilmour.

Listen to our top 5 below, and read our explanations of the effects involved. 1 Barber's shop illusion (Listen with headphones) This is a demonstration of the stereo effect. 2 Phantom words (Listen through stereo separated loudspeakers, best placed some distance apart) This illusion was first demonstrated by Diana Deutsch at the University of California, San Diego. Can You Trust Your Ears? (Audio Illusions) Best Illusions. Best Illusions include my personal top 10 hand-picked from all possible types. If you would like to see more similar illusions, don't hesitate to click the link below each of the images. All the categories are also listed in the yellow menu on the right.

Enjoy :-) 1. Dali Illusion Profile of Salvador Dali and a strange woman. Illusions. The Secret Life of the Brain : Mind Illusions. Optical Illusion Galleries. Nill. Optical Illusions. Illusions. Illusions The ancient adage, "seeing is believing" may seem to hold a key to objective truth, but does it? Of course anyone can believe anything they see, but beliefs hold no requirement to objective reality, nor does seeing, by itself, necessarily point to something "out there. " Moreover, seeing does not require a person to believe in what they see, as the adage seems to assert. Although vision certainly gives us information about the world, scientists now know that biological eyesight involves a complicated energy-matter and neurological network that, unfortunately, can also give us false information at times.

Although our eyes detect light, only the brain can "see," and when we get caught believing what we see, we also fall prey to falsehoods. The following visual illusions demonstrate that, although you may still believe what you see, what you believe and what the objects actually represent may differ by a wide margin. 10 Amazing Illusions. Visual Illusions Gallery : Index. My first objective for these pages will be to present some illusory stimuli which are fun to view. As time permits, I will add hypertext and graphical material relevant to my research and to students who are studying sensation, perception or research methods. Some Terms and Definitions Illusions in visual perception occur when experiences, which people report, do not correspond to physical measurements of stimuli. Optical Illusions, Videos, Images, Brain Teasers and more! BrainBashers : Optical Illusions.