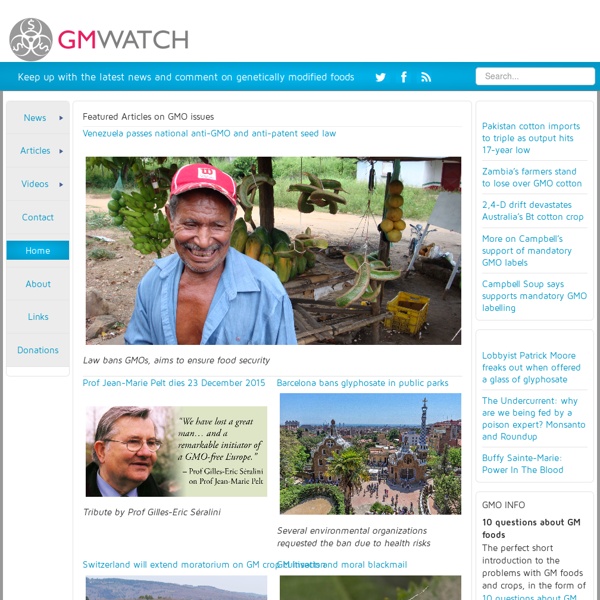 Occupy Monsanto GreenPeople Home ListingFeatures Add,RenewUpgrade Green Coupons Banner Advertise Linkto Us About Sign In Green Seal Contact Find local health food stores, organic food, green products, solar power supplies, green landscaping, organic baby products, doulas, natural pet care, natural beauty products, health and wellness services, green lifestyle products. Advertisers Add listing | Edit listing | Upgrade Your Listing | Banner advertising | Direct Mail Marketing | About us | Link to us | is OUR community project. MONSANTO'S WEB OF DECEIT Monsanto's World Wide Web of Deceit Index "Think of the internet as a weapon on the table. Either you pick it up or your competitor does, but somebody is going to get killed" The following articles detail a Monsanto dirty tricks campaign waged against the company's scientific and environmental critics. In one instance, Monsanto and its PR proxies ran a covert campaign of character assassination against two University of California, Berkeley scientists after they published research in the science journal Nature demonstrating GM contamination of Mexican maize. In another instance, Monsanto's poison pen campaign triggered a libel case that reached the High Court in London. THE COVERT BIOTECH WARThe battle to put a corporate GM padlock on our foodchain is being fought on the net - The Guardian, 19 November 2002 MONSANTO PR FIRM'S ADMISSIONThe Bivings Group says e-mail was sent by someone "working for Bivings" or "clients using our services"

Occupy Monsanto AnonOps Communications One account. All of Google. Sign in to continue to Blogger Find my account Forgot password? Sign in with a different account Create account One Google Account for everything Google Say No To GMOs! - September 2006 GM Food: A Guide for the Confused Our thanks to UK campaigner and lecturer Luke Anderson, geneticist Dr Michael Antoniou, and Prof Joe Cummins, Professor Emeritus of Genetics at the University of Western Ontario, for helping us through the maze. Q: What are genes? A: Genes are the inherited blueprints for the thousands of proteins that form the building blocks of all life, from bacteria to humans. Q: What is genetic engineering? A: Genetic engineering involves taking genes from one species and inserting them into another. Q: Is genetic engineering precise? A: No. Q: Isn't GM just an extension of traditional breeding practices? A: No - GM bears no resemblance to traditional breeding techniques. Traditional breeding techniques operate within established natural boundaries which allow reproduction to take place only between closely related forms. Q: Could this be dangerous? A: Potentially, yes. A: Dr Cunningham is talking about the concept of "substantial equivalence". Q: Which foods are not GM?

Do GMO Crops Really Have Higher Yields? According to the biotech industry, genetically modified (GM) crops are a boon to humanity because they allow farmers to "generate higher crop yields with fewer inputs," as the trade group Biotechnology Industry Organization (BIO) puts it on its web page. Buoyed by such rhetoric, genetically modified seed giant Monsanto and its peers have managed to flood the corn, soybean, and cotton seed markets with two major traits: herbicide resistance and pesticide expression—giving plants the ability to, respectively, withstand regular lashings of particular herbicides and kill bugs with the toxic trait of Bacillus thuringiensis, or Bt. Turns out, though, that both assertions in BIO's statement are highly questionable. Washington State University researcher Charles Benbrook has demonstrated that the net effect of GMOs in the United States has been an increase in use of toxic chemical inputs. That may be true, but it's a long way from "generating higher crop yields with fewer inputs."