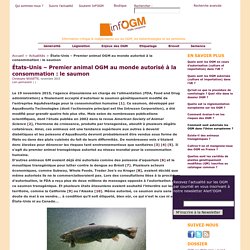 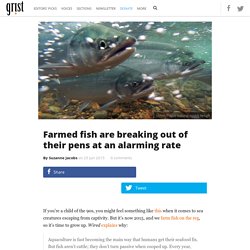 But it’s now 2015, and we farm fish on the reg, so it’s time to grow up. Wired explains why: Aquaculture is fast becoming the main way that humans get their seafood fix. But fish aren’t cattle; they don’t turn passive when cooped up. Every year, hundreds of thousands of salmon, cod, and rainbow trout wriggle through damaged or defective cages and flee into the open seas, never to be recaptured. Trine Thorvaldsen, a researcher in Norway, where it’s a criminal offense to let farmed fish out of captivity, has been studying how these fish escape. Friends of the Earth. Costco is one of the largest retailers of salmon and seafood in the U.S. and is one of the last large retailers that hasn’t yet made a commitment to keep GMO salmon off its shelves. 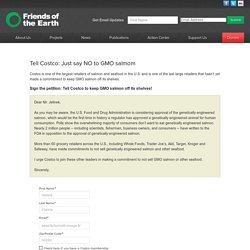 I urge Costco to join these other leaders in making a commitment to not sell GMO salmon or other seafood. Sincerely, Canada Approves Genetically-Modified Salmon. While Canadians were preoccupied with Senate scandals and Rob Ford’s latest debacle, Environment Canada quietly approved genetically-modified (GM) salmon eggs and salmon for farming off the country’s coast. 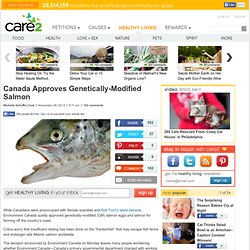 Critics worry that insufficient testing has been done on the “frankenfish” that may escape fish farms and endanger wild Atlantic salmon worldwide. The decision announced by Environment Canada on Monday leaves many people wondering whether Environment Canada—Canada’s primary governmental department charged with working to preserve and protect the natural environment—is performing its duties to Canadians. The government agency claims in the country’s national newspaper that the salmon eggs are not harmful to the environment or human health when they are produced and grown in contained facilities. Yet Environment Canada’s mandate does not include validating the health and safety of potential foods so it is questionable whether any testing on human health has actually occurred. 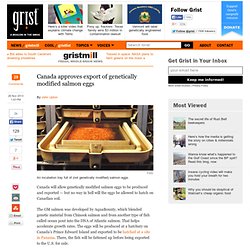 The GM salmon was developed by AquaBounty, which blended genetic material from Chinook salmon and from another type of fish called ocean pout into the DNA of Atlantic salmon. That helps accelerate growth rates. The eggs will be produced at a hatchery on Canada’s Prince Edward Island and exported to be hatched at a site in Panama. There, the fish will be fattened up before being exported to the U.S. for sale. Canada sued over approval of “toxic” GMO salmon. Canadian officials ventured into uncharted legal and ecological waters when they approved the cultivation and export of genetically engineered salmon eggs last year. 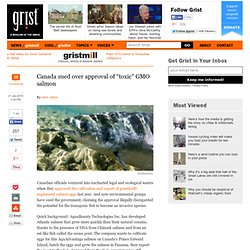 And now environmental groups have sued the government, claiming the approval illegally disregarded the potential for the transgenic fish to become an invasive species. Quick background: AquaBounty Technologies Inc. has developed Atlantic salmon that grow more quickly than their natural cousins, thanks to the presence of DNA from Chinook salmon and from an eel-like fish called the ocean pout.

Don't Let Genetically Engineered Salmon Out of the Lab. Tell Supermarkets No to Frankenfish. It’s time to take a stand and tell major U.S. supermarkets to boycott genetically engineered salmon commonly referred to as “Frankenfish.” 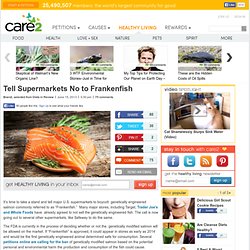 Many major stores, including Target, Trader Joe’s and Whole Foods have already agreed to not sell the genetically engineered fish. The call is now going out to several other supermarkets, like Safeway to do the same. The FDA is currently in the process of deciding whether or not the genetically modified salmon will be allowed on the market. If “Frankenfish” is approved, it could appear in stores as early as 2014 and would be the first genetically engineered animal determined safe for consumption. Stoppez l'attaque du poisson Frankenstein. Genetically-Modified Salmon Insufficiently Tested for Safety.