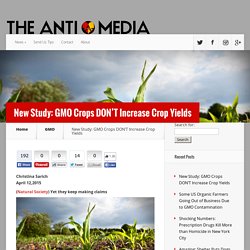 How’s this high-flying claim made by the Biotechnology Industry organization: “Agricultural biotechnology continues to increase crop yield and farmer income worldwide while supporting the environment.” That example of hyperbole was published back in 2007. Most recently, at a hearing before the House Agriculture Committee, those who don’t want GM foods labeled brought out their old standby arguments – among them, that GM seed yields more crops (and this, of course is the key to feeding the world’s 7.3 billion people.) Included in the ‘witnesses’ for biotech was Professor Nina Fedoroff of Penn State University. To give GM crops a fair swing – let’s see if they really have increased crop yields as biotech’s mouthpieces claim. 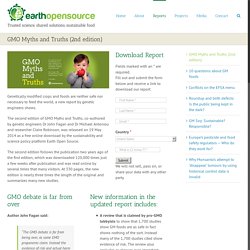 Instead the evidence of risk and actual harm from GM foods and crops to health and the environment has grown in the two years since we brought out the first edition. “The good news is that GMOs are not needed to feed the world. Former Pro-GMO Scientist Speaks Out On The Real Dangers of Genetically Engineered Food. There are no long-term feeding studies performed in these countries to demonstrate the claims that engineered corn and soya are safe. 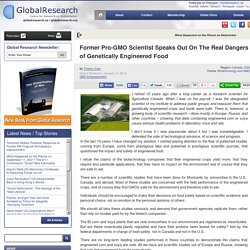 All we have are scientific studies out of Europe and Russia, showing that rats fed engineered food die prematurely. These studies show that proteins produced by engineered plants are different than what they should be. Inserting a gene in a genome using this technology can and does result in damaged proteins. The scientific literature is full of studies showing that engineered corn and soya contain toxic or allergenic proteins. Genetic engineering is 40 years old. The whole paradigm of the genetic engineering technology is based on a misunderstanding. I have drafted a reply to Paul Horgen’s letter to the Comox Valley Environmental Council. I am turning you towards a recent compilation (June 2012) of over 500 government reports and scientific articles published in peer reviewed Journals, some of them with the highest recognition in the world.

Genetic Roulette. The American Academy of Environmental Medicine (AAEM) According to the World Health Organization, Genetically Modified Organisms(GMOs) are "organisms in which the genetic material (DNA) has been altered in such a way that does not occur naturally. 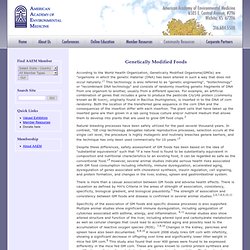 "1 This technology is also referred to as "genetic engineering", "biotechnology" or "recombinant DNA technology" and consists of randomly inserting genetic fragments of DNA from one organism to another, usually from a different species. For example, an artificial combination of genes that includes a gene to produce the pesticide Cry1Ab protein (commonly known as Bt toxin), originally found in Bacillus thuringiensis, is inserted in to the DNA of corn randomly. Both the location of the transferred gene sequence in the corn DNA and the consequences of the insertion differ with each insertion. The plant cells that have taken up the inserted gene are then grown in a lab using tissue culture and/or nutrient medium that allows them to develop into plants that are used to grow GM food crops.2. 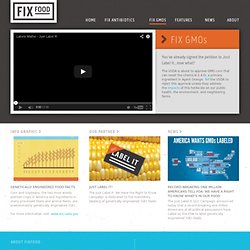 For more information visit: www.ers.usda.gov Our Partner Just Label It! The Just Label It: We Have the Right to Know campaign is dedicated to the mandatory labeling of genetically engineered (GE) foods. Record-breaking One Million Americans Tell FDA: We Have a Right to Know What’s in Our Food The Just Label It (JLI) Campaign announced today that a record-breaking one million Americans of all political persuasions have called on the FDA to label genetically engineered (GE) foods.

5 GMO Myths Busted. Fish: Food & Water Watch Gives You the Facts. Fish Farming Many fish-lovers would be horrified to learn that huge quantities of fish and shrimp are now being grown in giant nets, cages, and ponds where antibiotics, hormones and pesticides mingle with disease and waste. 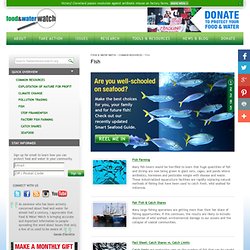 These industrialized aquaculture facilities are rapidly replacing natural methods of fishing that have been used to catch fresh, wild seafood for millennia. Fair Fish & Catch Shares Many large fishing operations are getting more than their fair share of fishing opportunities. If this continues, the results are likely to include: depletion of wild seafood, environmental damage to our oceans and the collapse of coastal communities. Fact Sheet: Catch Shares vs. Catch limits are protective caps on the number of fish that can be caught in a fishing year. Seafood One out of four Americans experiences a foodborne illness each year.