Follow this link for images of Ellen and William Craft. Olaudah Equiano (c.1745-1797): The Former Slave, Seaman & Writer: The Abolition of Slavery Project. Olaudah Equiano, was a former enslaved African, seaman and merchant who wrote an autobiography depicting the horrors of slavery and lobbied Parliament for its abolition. 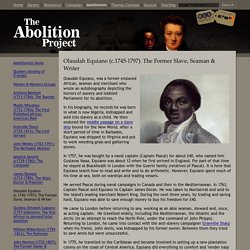 In his biography, he records he was born in what is now Nigeria, kidnapped and sold into slavery as a child. He then endured the middle passage on a slave ship bound for the New World. After a short period of time in Barbados, Equiano was shipped to Virginia and put to work weeding grass and gathering stones. In 1757, he was bought by a naval captain (Captain Pascal) for about £40, who named him Gustavas Vassa. 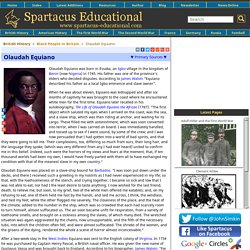 His father was one of the province's elders who decided disputes. According to James Walvin "Equiano described his father as a local Igbo eminence and slave owner". Ellen Craft, the Slave Who Posed as a Master and Made Herself Free. Ellen Craft Facts. American activist Ellen Craft (c. 1826-1897) is known for her remarkable escape from slavery, narrated in Running a Thousand Miles for Freedom (1860). 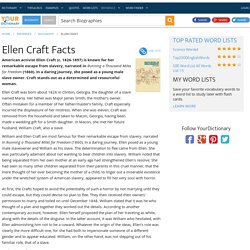 In a daring journey, she posed as a young male slave owner. Craft stands out as a determined and resourceful woman. Ellen Craft was born about 1826 in Clinton, Georgia, the daughter of a slave named Maria. Her father was Major James Smith, the mother's owner. Often mistaken for a member of her father/master's family, Craft especially incurred the displeasure of her mistress. William and Ellen Craft are most famous for their remarkable escape from slavery, narrated in Running a Thousand Miles for Freedom (1860). At first, the Crafts hoped to avoid the potentiality of such a horror by not marrying until they could escape, but they could devise no plan to flee.

Plan for Daring Escape The plan was as follows: Given the great distance they would have to cover, they could not hope to make a successful journey on foot. The plan succeeded. Books. Ottobah Cugoano. Ottobah Cugoano was born in Africa in about 1757. 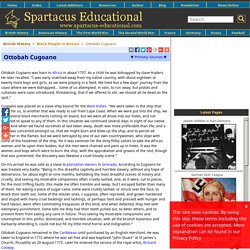 As a child he was kidnapped by slave-traders. He later recalled: "I was early snatched away from my native country, with about eighteen or twenty more boys and girls, as we were playing in a field. We lived but a few days' journey from the coast where we were kidnapped... Some of us attempted, in vain, to run away, but pistols and cutlasses were soon introduced, threatening, that if we offered to stir, we should all lie dead on the spot. " Cugoano was placed on a slave-ship bound for the West Indies. On his arrival he was sold as a slave to plantation owners in Grenada. Ottobah Cugoano remained in the Caribbean until purchased by an English merchant. Cugoano became one of the leaders of London's black community. Cugoano was taught to read and write. In 1793 Cugoano upset William Wilberforce by describing him as a hypocrite when he refused to support the campaign to end slavery in the British Empire. 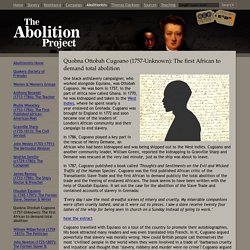 He was born in 1757, in the part of Africa now called Ghana. In 1770, he was kidnapped and taken to the West Indies, where he spent nearly a year enslaved on Grenada. Cugoano was brought to England in 1772 and soon became one of the leaders of London's African community and their campaign to end slavery. In 1786, Cugoano played a key part in the rescue of Henry Demane, an African who had been kidnapped and was being shipped out to the West Indies. Cugoano and another community leader, William Green, reported the kidnapping to Granville Sharp and Demane was rescued at the very last minute, just as the ship was about to leave.

In 1787, Cugoano published a book called 'Thoughts and Sentiments on the Evil and Wicked Traffic of the Human Species'. "Every day I saw the most dreadful scenes of misery and cruelty. Hear the extract Cugoano and Equiano's books influenced public opinion. What was it like to be a slave? In the rural context, living conditions for enslaved people were determined in large part by the size and nature of the agricultural unit on which they lived. 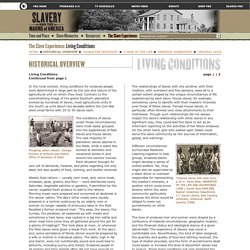 Contrary to the overwhelming image of the grand Southern plantation worked by hundreds of slaves, most agricultural units in the South up until about two decades before the Civil War were small farms with 20 to 30 slaves each. The conditions of slaves under these circumstances were most easily grouped into the experiences of field slaves and house slaves. The vast majority of plantation slaves labored in the fields, while a select few worked at domestic and vocational duties in and around the owners' houses. Each situation brought its own set of demands, hazards, and perks regarding not only labor, but also quality of food, clothing, and shelter received. Weekly food rations -- usually corn meal, lard, some meat, molasses, peas, greens, and flour -- were distributed every Saturday. Different circumstances surrounded fieldwork.