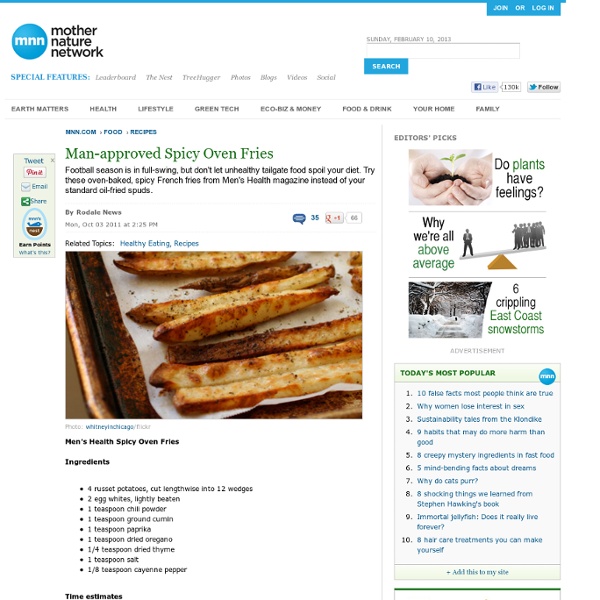 Do foods taste the same to animals as they do to us? Animals see and smell the world differently than we do, and research shows that even the foods we eat taste different across different palates. While vertebrates all have tongues, the number of taste buds differs by species. And just as the strength of our sense of smell depends on the number of olfactory receptors, a species' taste sensitivity depends on how many taste buds it has.

Cheesy Cauliflower Pancakes A couple weeks ago Giz over at Equal Opportunity Kitchen posted a recipe for Cauliflower Pancakes. They sounded & looked wonderful to me so the head of yellow cauliflower in our fridge was quickly marked for pancakes. When I mentioned them in my weekly menu Dawn at Vanilla Sugar said she hoped there would be cheese in them. Well that was like a light bulb going on over my head.

Italian Garlic Knots Recipe from Pillsbury The template DoubleClickAd could not be loaded. HTTP Status code: 0 Why knot make pizzeria-style garlic bread bites at home? Arlene Cummings January 12, 2015 to 4 cloves garlic, chopped The Best Broccoli of Your Life November 10, 2008 | By Adam Roberts | 370 Comments [Hi, I'm Adam Roberts, The Amateur Gourmet. You're about to read the most popular post I've ever written in the ten year history of my blog. Homemade French Fries « Naturally Ella Why there is no need to purchase pre-made fries in the freezer aisle – in pictures and rhyme: One potato (find a potato) Two potato (cut the ends off) Three potato (cut slices) Four (cut fries from slices) Five potato (Toss in herbs and olive oil)

Feel the Cauliflower Power! Our 11 Most Delicious Recipes! Written by PETA | August 19, 2014 Cauliflower is a wonderfully versatile vegetable for the summer months. A perfect addition to your backyard barbecues, it can be featured in a main dish, used in a wide variety of side dishes, or incorporated into a light salad.

san francisco garlic fries Well folks, not much going on this week. I’m still 800 million degrees, which I guess is normal if you’re a human incubator. I’ve become a stretchy, elastic waisted pants spokesperson, because ohmygah maternity jeans are the most incredible thing I have ever worn, excepting for the sweat pants I model almost daily. (Seriously, they need to make jeans this comfortable for non-knocked up folks.) The weather has suddenly de-humidified itself and is now safe for this 800 million degree gal to go outside and actually enjoy it.

Zucchini Noodles with Pesto This dish is a play on pesto spaghetti! I used a spirooli to make thin zucchini noodles and tossed it in a creamy pesto sauce. Pesto is usually made exclusively from pine nuts but holy cow they were really expensive at my local store! so I only managed to use part pine nut and added cashews as their poorer alternative. Preparation time: 20mins (plus standing time for noodles)Serves 2 You’ll need: Postcards From The Future Show What London Will Look Like After Climate Change What will the world's biggest cities look like as climate change progresses? In a series called Postcards from the Future, U.K. artists Robert Graves and Didier Madoc-Jones imagined future scenes from London, transforming familiar city views according to different scientific projections. "We were hearing a lot about the potential impacts of climate change, but everything we were hearing about was just words, or very two-dimensional graphics in magazines," says Madoc-Jones. "The only imagery we were getting was pictures or reports from places like Bangladesh…the trouble is that when you live in London, when you hear reports of people suffering in other parts of the world, you can easily forget about those things and put them to one side."

Carrot and celeriac root salad with lemon sauce [Vegan] Jaymi's Notes:This is one very simple side dish with an unusual flavor. Though I know plenty of people with an aversion to cooked carrots, these vegetables are cooked until tender but not over done. The trick to yummy cooked carrots is knowing when to stop cooking! Since there isn't a measurement for the water, I ended up adding a little more than needed -- my veggies were done simmering but the sauce was not thick yet. If this happens to you, just remove the veggies from the liquid and set them aside in a bowl. Then allow the sauce to keep simmering until the desired thickness.