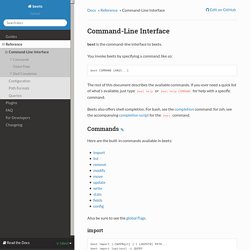 The rest of this document describes the available commands. If you ever need a quick list of what’s available, just type beet help or beet help COMMAND for help with a specific command. Beets also offers shell completion. For bash, see the completion command; for zsh, see the accompanying completion script for the beet command. Commands¶ Here are the built-in commands available in beets: Also be sure to see the global flags. import¶ beet import [-CWAPRqst] [-l LOGPATH] PATH... beet import [options] -L QUERY Add music to your library, attempting to get correct tags for it from MusicBrainz. Point the command at some music: directories, single files, or compressed archives. Directories passed to the import command can contain either a single album or many, in which case the leaf directories will be considered albums (the latter case is true of typical Artist/Album organizations and many people’s “downloads” folders).

Advanced Awesomeness — beets 1.3.14 documentation. So you have beets up and running and you’ve started importing your music. 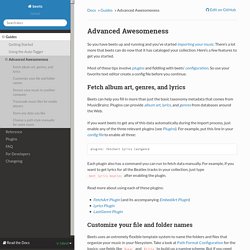 There’s a lot more that beets can do now that it has cataloged your collection. Here’s a few features to get you started. Most of these tips involve plugins and fiddling with beets’ configuration. So use your favorite text editor create a config file before you continue. Fetch album art, genres, and lyrics¶ Sampsyo/beets. Path Formats — beets 1.3.14 documentation. The paths: section of the config file (see Configuration) lets you specify the directory and file naming scheme for your music library. 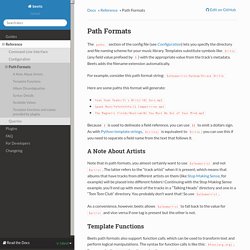 Templates substitute symbols like $title (any field value prefixed by $) with the appropriate value from the track’s metadata. Beets adds the filename extension automatically. For example, consider this path format string: $albumartist/$album/$track $title Here are some paths this format will generate: Yeah Yeah Yeahs/It's Blitz! Because $ is used to delineate a field reference, you can use $$ to emit a dollars sign. A Note About Artists¶ Note that in path formats, you almost certainly want to use $albumartist and not $artist. As a convenience, however, beets allows $albumartist to fall back to the value for $artist and vice-versa if one tag is present but the other is not.

Plugins. Sampsyo/beets. Sampsyo/beets. Beets Music Tagger: Command Line Tool To Fix Metadata And Organize Your Music Library. Beets is a cross-platform command line music tagger and organizer which you can use to "get your music collection right once and for all". 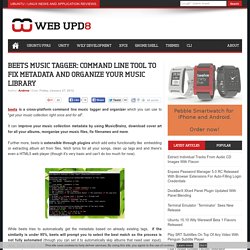 It can improve your music collection metadata by using MusicBrainz, download cover art for all your albums, reorganize your music files, fix filenames and more. Further more, beets is extensible through plugins which add extra functionality like embedding or extracting album art from files, fetch lyrics for all your songs, clean up tags and and there's even a HTML5 web player (though it's very basic and can't do too much for now). Getting Started — beets 1.3.14 documentation. Welcome to beets! 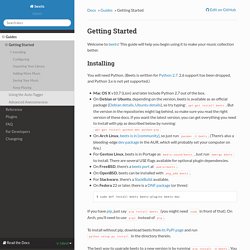 This guide will help you begin using it to make your music collection better. Installing¶ You will need Python. (Beets is written for Python 2.7. 2.6 support has been dropped, and Python 3.x is not yet supported.) Mac OS X v10.7 (Lion) and later include Python 2.7 out of the box.On Debian or Ubuntu, depending on the version, beets is available as an official package (Debian details, Ubuntu details), so try typing: apt-get install beets.