The Top 10 Smart Cities On The Planet 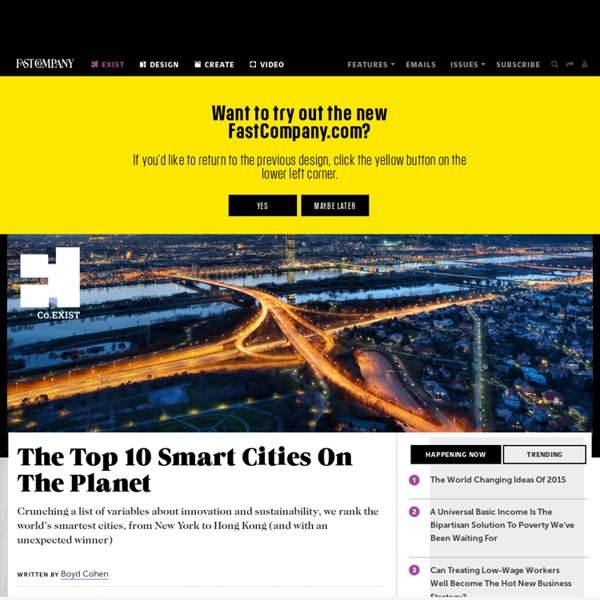 Last year, I spent considerable time researching best practices for climate resilient cities—an endeavor that culminated in what I believe was the first ever global ranking of resilient cities. Now, after extensive research on smart cities initiatives around the globe, I have developed what may be the first ever global rankings of smart cities. The term "smart cities" is a bit ambiguous. Some people choose a narrow definition—i.e. cities that use information and communication technologies to deliver services to their citizens. I prefer a broader definition: Smart cities use information and communication technologies (ICT) to be more intelligent and efficient in the use of resources, resulting in cost and energy savings, improved service delivery and quality of life, and reduced environmental footprint—all supporting innovation and the low-carbon economy. Here, then, are the top 10 smart cities: 1.) 2.) 3.) 4.) 5.) 6.) 7.) 8.) 9.) 10.)

A Tale of Evaluation and Reporting in UK Smart Cities Posted by Anastasia Panori at 4 May 2016 in IntelCities Measurement This report has been written under the framework of SmartDframe project, targeting on the investigation of approaches regarding the evaluation of smart city projects and programs. As it is stated on the beginning of this report, although smart city programs have been placed at the center of attention, less discussion has been made about their evaluation and the measurement of their outcomes. The report provides a series of smart city case studies that exemplify contemporary city practices, offering a timely, insightful contribution to city discourse about best practice approaches to evaluation and reporting of complex smart city projects and programs.

Boston named leading digital city in the United States Here we look at how Boston has become America’s number one digital city. This rating was given by the Center for Digital Government’s 10th Annual Digital Cities Survey. The survey looks at cities that successfully utilize technology to better conduct government and serve constituents.

This Beautiful Mexico City Building Eats The City's Smog Plenty of green buildings cut down on pollution with design features that minimize their energy usage. A tower under construction at a Mexico City hospital, on the other hand, actually eats pollution in the air that surrounds it. The Torre de Especialidades is shielded with a facade of Prosolve370e, a new type of tile whose special shape and chemical coating can help neutralize the chemicals that compose smog: and not just a small amount of them, but the equivalent produced by 8,750 1,000 cars driving by each day. The tile is the first product by Berlin-based design firm Elegant Embellishments, whose co-founder Allison Dring explained to me via email, just exactly how a 100-meter-long tile screen can suck up serious amounts of smog. When UV light cuts through smoggy air and hits the titanium dioxide on the tiles, a chemical reaction occurs between the tiles and chemicals in the smog—mono-nitrogen oxides, or NOx. But it’s not just chemistry that makes this work: it’s design.

Kickstarting Open Source City Software: Transit App for iOS 6 and Beyond The way we get around is changing. We increasingly combine bikes and transit. And in many cities we’re seeing a birth of whole new modes of transport like bike-share and carshare. Over at OpenPlans they build open source tools that are responsive to these changes and let us imagine new ways of moving and with the announcement of iOS version 6, Apple has dropped Google Maps and with it, previously built-in support for travel directions via public transit they are looking to kickstart a solution : With support, OpenTripPlanner Mobile, an open source application developed by OpenPlans will put transit back on the iPhone. The app will also add new features that Google Maps didn’t have, allowing users to combine walking, bikes, bike-share and transit together, finding the fastest and most efficient trips regardless of mode of transportation.

Co.Exist: World changing ideas and innovation Having worked in the smart cities space for several years now, I am encouraged by the growth of the sector and the pace of technological advancements being developed for urban environments. However, I believe that the smart-cities movement is being held back by a lack of clarity and consensus around what a smart city is and what the components of a smart city actually are. While some people continue to take a narrow view of smart cities by seeing them as places that make better use of information and communication technology (ICT), the cities I work with (and most of the participants in the #smartchat, a monthly Twitterchat about smart cities held on the first Wednesday of each month) all view smart cities as a broad, integrated approach to improving the efficiency of city operations, the quality of life for its citizens, and growing the local economy. Later this year, I’ll publish my annual rankings of smart cities here on Co.Exist. Step 1: Create a Vision with Citizen Engagement

Hitachi City Data Exchange Go To Market (GTM) Specialist - City Data Exchange Ref.no. 31681 Job Description Smart cities get their own operating system 30 September 2011Last updated at 12:23 By Katia Moskvitch Technology reporter, BBC News Smart cities with devices chatting to each other may dot the planet in the near future Cities could soon be looking after their citizens all by themselves thanks to an operating system designed for the metropolis. The Urban OS works just like a PC operating system but keeps buildings, traffic and services running smoothly. The software takes in data from sensors dotted around the city to keep an eye on what is happening.

The 8 Smartest Cities In Latin America As I've written before, all smart cities are on the journey towards being smarter, but none of them have arrived. This statement could not be more true when discussing smart cities in Latin America. I must admit I have a soft spot for the region. For the past two years, I have lived in two of the top 10 cities, and visited several others frequently. But Latin America is still a developing region and this list is primarily made up of cities in developing countries, unlike the rankings for North America, Asia/Pacific, and Europe.

Sustainable Roof Opportunities - Facility Management Roofing Feature StumbleUpon April 2012 - Roofing Roofs on institutional and commercial facilities used to be simply protective coverings for operations and equipment. But times have changed. A growing number of facilities now view rooftops as components that can provide significant value to the organization in the form of energy savings and sustainable attributes. Elevate Your Thinking: Light, air and connectivity beyond the street As we increasingly urbanize, relearning the craft of creating human-scaled places, I often — too often — hear that “if we just get the ground floor right” then all will be fine. While obviously a good start, and one that addresses the most immediate of pedestrian interests, I find that this line of thinking ultimately allows, even incentivizes, buildings poorly designed above the first floor, thereby marginalizing the complete urban experience. The crescendo of urbanism?

The multiplexed metropolis EVEN thieves, it seems, now have a smartphone app. Makkie Klauwe (it means something like “easy pickings” in Amsterdam slang) reveals the city’s best places for pilfering—for instance Reestraat and Tuinstraat, where bicycles appear to be a good target. The app depends for its dark arts on pulling together publicly available data on disposable income, crime levels and other problems reported in a district.