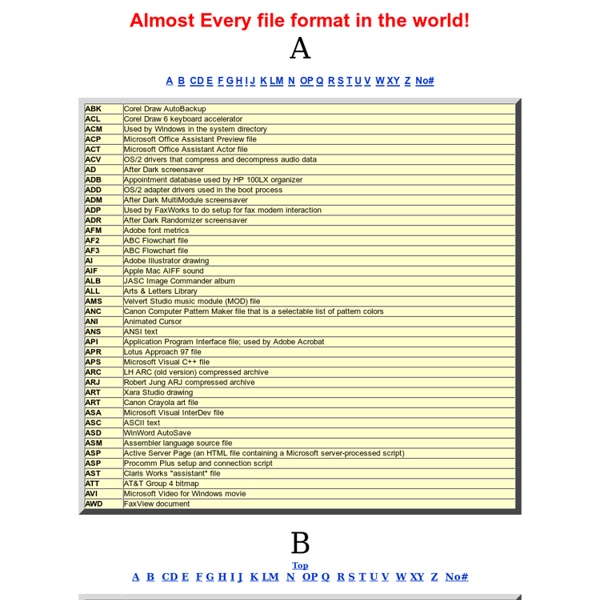 index #f0f0f0 #ebe3e2 #f2decb #bdb3b3 #7485a6 #bac7e8 Fallacy List 1. FAULTY CAUSE: (post hoc ergo propter hoc) mistakes correlation or association for causation, by assuming that because one thing follows another it was caused by the other. example: A black cat crossed Babbs' path yesterday and, sure enough, she was involved in an automobile accident later that same afternoon. example: The introduction of sex education courses at the high school level has resulted in increased promiscuity among teens.

Windows Problem Solver Result statistics—please report your results. General The system tray (in short: systray, nowadays also called taskbar notification area) is the icon strip normally located near the right end of the task bar, next to the clock. Some Windows XP installations show a peculiar defect in that some systray icons disappear or, rather, do not appear, when the system is booted and the user logs on. The problem is even more prevalent on systems with autologon. The most frequently affected icons seem to be the speaker icon (sound volume) and the power/energy icon. The Basics of C Programming" The previous discussion becomes a little clearer if you understand how memory addresses work in a computer's hardware. If you have not read it already, now would be a good time to read How Bits and Bytes Work to fully understand bits, bytes and words. All computers have memory, also known as RAM (random access memory). For example, your computer might have 16 or 32 or 64 megabytes of RAM installed right now.

www.technixupdate Advertisement Although it quite late now, but the April fool day has not ended and moreover I just want to blog about these computer pranks which you can play on your friend computer any day you want to. We will tell you some of the hilarious computer tricks with which you can annoy your friend any time you want irrespective of any april fool day. All these are portable so they do not require any installation on the target computer and you can remove them anytime just by deleting the program exe. Here is the list of all these computer pranks with their descriptions about what they do. 1. The 101 Most Useful Websites on the Internet Here are some of the most useful websites on the internet that you may not know about. These web sites, well most of them, solve at least one problem really well and they all have simple web addresses (URLs) that you can memorize thus saving you a trip to Google. And if you find this list useful, also check out the expanded version – The Most Useful Websites – which now offers a collection of 150+ undiscovered and incredibly useful websites to enhance your productivity. ctrlq.org/screenshots – for capturing screenshots of web pages on mobile and desktops. dictation.io – online voice recognition in the browser itself. Changelog and Updates

GIANT List of Interesting Documentaries « bluehoney.org bluehoney.org Mining the internet for psychedelic beeswax since 1997 Posts Comments How To Fix High CPU Usage In Windows If your computer fans frequently hit top speeds, it’s a sign that your CPU is fully loaded. Simultaneously, your computer may slow down. That’s annoying, especially if you’re not actually doing anything. The CPU (central processing unit), also known as processor, is the brain of your computer. Like your own noggin, it can become overwhelmed if bombarded with too many processes, or if a single task consumes undue attention.