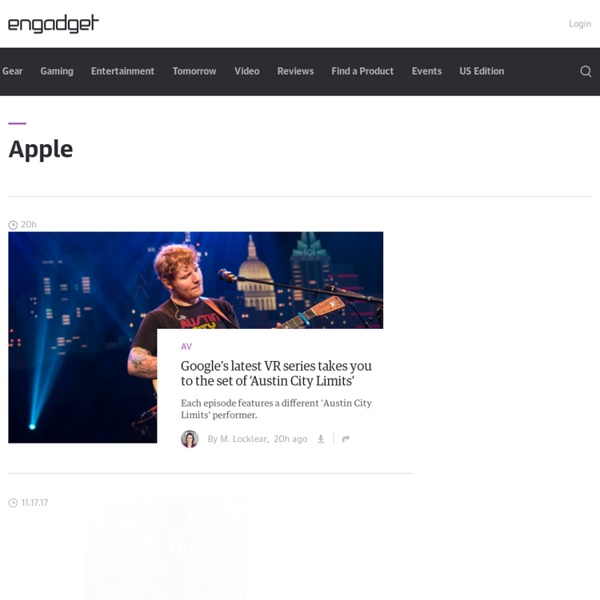 ProfHacker Many of us have favorite tools that suit our workflows well, helping us accomplish our tasks and keep track of needed bits of information. Below you’ll find a list of applications, services, and utilities that I use almost daily. Workflow. I’m a big fan of ToDoist, my preferred task manager.

Modder outfits Nexus One with an Arduino-powered, pager-style display Not satisfied with a Sony Ericsson LiveView as a secondary display for your Android phone, or a dual-screen device like the Kyocera Echo? Then you might want to consider something like this decidedly more homebrew approach from modder "follower," which uses the Android Open Accessory protocol to connect the Frankenpager-type contraption you see above to an otherwise ordinary Nexus One. Of course, that two-line display does limit things somewhat, but it will at least let you see the time and any incoming text messages without forcing you to leave your game. Hit the source link below for all the details and software you need to build your own. Comments

The Ergo Office Pure Office Double Workstation I in Apple Laminate Jesper Office specializes in making modular office furniture for the home and small business, along with a complementary line of modular library and home entertainment furniture. The company, originally based in Denmark, has been designing and manufacturing high quality furniture since 1935. Today, Jesper Office is based in Branchburg, New Jersey where it maintains a U.S warehouse and sales office along with several manufacturing facilities overseas. For more than 75 years, Jesper Office has been committed to making affordable, high quality, and well designed furniture for the home and office. At Jesper Office, they work hard to create timeless pieces that are as practical as they are beautiful; furniture that is flexible enough to change as needs change.

Macintosh Stories: Busy Being Born The Macintosh User Interface wasn't designed all at once; it was actually the result of almost five years of experimentation and development at Apple, starting with graphics routines that Bill Atkinson began writing for Lisa in late 1978. Like any evolutionary process, there were lots of false starts and blind alleys along the way. It's a shame that these tend to be lost to history, since there is a lot that we can learn from them. Fortunately, the main developer of the user interface, Bill Atkinson, was an avid, lifelong photographer, and he had the foresight to document the incremental development of the Lisa User Interface (which more or less became the Mac UI after a few tweaks) with a series of photographs. He kept a Polaroid camera by his computer, and took a snapshot each time the user interface reached a new milestone, which he collected in a loose-leaf notebook.

Extract usernames from E-mail IDs [using LEFT and FIND formulas in Excel] Posted on January 19th, 2010 in Learn Excel - 87 comments Today we will learn to use Excel’s LEFT and FIND formulas. But what fun it is to learn a new formula on a Tuesday? iPad 2 jailbreak available now? (video) Can't say it happened at Mach 3, but the iPad 2 jailbreak that we saw teased back in mid-March seems to have made its way out into the wild at long last. According to the video hosted up just past the break, JailbreakMe 3.0 is now available with support for the iPad 2. It's bruited that the version making its way around now was leaked by a beta tester (read: it ain't the final build), and we're seeing mixed success / failure stories in the related YouTube comments. We'd encourage the daring to tap the links below in order to get started, and if you do, let us know how it all works out below.

First-Person Final Cut Pro X, Day One: Completely at Sea Professional film & video editor Matthew Levie is based in San Francisco, produced and edited the documentary Honest Man and writes Blog and Capture. First-Person Final Cut Pro X is the unvarnished story of his week-long introduction to the new Final Cut. [Note that all opinions and assessments of FCP X expressed here are Matt's own, not TUAW's, and that any misconceptions or misunderstandings of FCP X features represent Matt's hands-on first reactions. –Ed.]

Facebook to launch in-browser video chat powered by Skype? Microsoft's $8.5 billion acquisition of Skype hasn't closed yet, but it looks like Redmond is already working behind the scenes to make the service even more ubiquitous. According to an anonymous source interviewed by TechCrunch, Facebook is going to introduce video chat next week, and that service will be powered by none other than Skype. And while the service will be browser-based, it's also said to include a desktop component.

Nokia bringing NFC to all Symbian phones When Nokia announced its latest Symbian Belle phones last week, the company emphasized that all three devices support Near-Field Communications (NFC) technology that enable the devices to be used as payment methods and mobile wallets at point of purchases: if retailers support the technology, they can just wave their phones near point-of-sales terminals and approve the transaction—depending how users have things set up, payments might come off a credit card, out of a bank account, or get appended to a user’s phone bill. NFC technology can also be used to transfer contact and calendar information between proximate devices and has significantly applications for gaming and social sharing. Nokia’s Symbian operating system might be going the way of the dodo—eventually—but the company is planning broad NFC support across future Symbian handsets. Symbian phones should have universal NFC support by mid-2012.

Openwave sues Apple and RIM for patent infringement Add one more to the tally of patent lawsuits involving Apple and RIM. This time it's Openwave Systems using the license-by-litigation technique, and it's alleging that multiple devices infringe five of its patents on mobile internet -- including offline email access, cloud computing, and secure server access. The company claims that Apple's iPhone 3G, 3GS and 4, the iPod Touch, both iPads, plus RIM's Blackberry Curve 9930 and the PlayBook all infringe its IP. Apparently, Openwave initially took the pacifist route to persuade Cupertino and Waterloo to pay up, but when its overtures were ignored, it decided upon more aggressive tactics.

Toshiba Thrive to land in UK September 1st, now known as the AT100 Neuss, Germany, 31st August 2011 – Toshiba Europe GmbH today announces that its latest multimedia tablet will be available in the UK on 1st September 2011. Following our announcement early in 2011, the device will be known as the Toshiba AT100 and combines leading hardware with Android™ 3.1, Honeycomb, to deliver a highly versatile tablet allowing users to enjoy many experiences such as browsing the web, reading emails, watching HD movies, reading ebooks and online newspapers and catching up with friends on social networks. Ideal for users who want to enjoy HD performance on their tablet, the Toshiba AT100 combines NVIDIA® Tegra™ 2 processing technology with Android 3.1 providing both power and everyday ease-of-use. Its 25.7cm (10.1'') HD capacitive display is ideal for watching movies and Adobe® Flash® support, Toshiba Resolution+ image enhancement and innovative sound technology ensure premium multimedia performance. A range of accessories

Toyota smashes EV record on Nurburgring, speed rivals gas-powered cars (video) Toyota Electric Racer Sets New Lap Record at Nürburgring COLOGNE (Germany) - Toyota Motorsport GmbH (TMG) has set a new lap record for an electric vehicle (EV) at the legendary 20.8km Nürburgring Nordschleife circuit in Germany. The TMG EV P001, with 100% electric powertrain and Jochen Krumbach at the wheel, set a new lap record of 7mins 47.794secs to beat the previous lap record, which stood at 9mins 1.338secs, by a very substantial margin. Using two electric motors, the TMG electric powertrain has a top speed of 260km/h which combined with 800Nm of torque to achieve impressive speeds on the extremely challenging Nordschleife track, which includes significant elevation changes and lengthy flat-out sections. TMG's target prior to the 29 August record run was to become the first electric vehicle break the eight-minute barrier and this was achieved comfortably on a day when the notoriously changeable Nürburgring weather stayed fine, although track temperatures were relatively low.

Sony's new A, E, and S series Walkmans to get Music Unlimited freebie Music Unlimited™ will be available on Sony® Walkman® MP3 Players WHAT: Music Unlimited, Sony's cloud-based digital music service, will be available on Walkman NWZ-A860, S760BT and E460 models this year. Owners of the three newly announced Walkman models will be able to simply download a set-up launcher and access over 10 million unique songs. Pete Cashmore - Google+ - Have you spent more time, less time, or the same amount on… I put my invite link up on FB, for my friends to join - not 1 (ONE) have joined or even commented on the link, can't even convince my wife. As +Grant Hancock says - Google+ has to offer something very special and unique that most people would find worthwhile, because I don't think people have the time or interrest in keeping several social networks up to date - where to post checkins, where to post status updates and pictures and especially how and addressed to whom - as the security models are very different it takes too much thinking and people have to mentally switch context, I don't think there are a lot of people who'd want to make that sacrifice, posting should be a nobrainer.