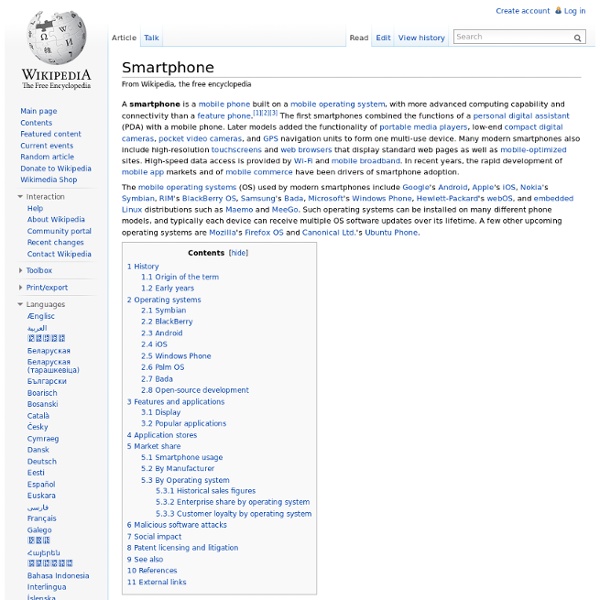 A smartphone, or smart phone, is a mobile phone with more advanced computing capability and connectivity than basic feature phones.[1][2][3] Early smartphones typically combined the features of a mobile phone with those of another popular consumer device, such as a personal digital assistant (PDA), a media player, a digital camera, or a GPS navigation unit. Modern smartphones include all of those features plus the features of a touchscreen computer, including web browsing, Wi-Fi, and 3rd-party apps. History[edit] Early years[edit] Devices that combined telephony and computing were first conceptualized in 1973, and were offered for sale beginning in 1993. Forerunners[edit] The first mobile phone to incorporate PDA features was an IBM prototype developed in 1992 and demonstrated that year at the COMDEX computer industry trade show. PDAs[edit] In 1996, Nokia released the Nokia 9000 which became their best-selling phone of that time. Mass adoption[edit] New players[edit] The future[edit] Bada[edit] Related:  Smart Phones Mobile • PHONEFULLY ALL

Blackberry thumb BlackBerry thumb is a neologism that refers to a form of repetitive strain injury (RSI) caused by the frequent use of the thumbs to press buttons on PDAs, smartphones, or other mobile devices. The name of the condition comes from the BlackBerry, a brand of smartphone that debuted in 1999,[1] although there are numerous other similar eponymous conditions that exist such as "Wiiitis",[2] "Nintendinitis",[3] "Playstation thumb", "cellphone thumb",[4] "smartphone thumb", "Android thumb", and "iPhone thumb". The medical name for the condition is De Quervain syndrome and is associated with the tendons connected to the thumb through the wrist. Causes for the condition extend beyond smartphones and gaming consoles to include activities like golf, racket sports, and lifting.[5] Symptoms of BlackBerry thumb include aching and throbbing pain in the thumb and wrist.[6] In severe cases, it can lead to temporary disability of the affected hand, particularly the ability to grip objects.[7]

5 Best Android Apps for Taking Better Screenshots Ever since version 4.0 (Ice Cream Sandwich), screenshots on Android have been a cakewalk. The operating system comes with a built-in screenshot method that works pretty well, but it’s incredibly basic and might leave you wanting more. 6 Ways To Take Screenshots On Android 6 Ways To Take Screenshots On Android No matter which Android device you have, you can take a screenshot without rooting your device. But rooting your device offers you some neat tricks -- even if you're using Android 4.0. What if you need additional functionality and flexibility? In that case, you may want to install a dedicated screenshot app that offers enhanced features. 1. Screenshot Ultimate is one of the better choices out there due to its toolkit that expands on the basic screenshot function. Capture methods include floating buttons, shake-to-snap, various hardware buttons, interval schedules, light sensors, proximity sensors, and even audio. 2. 3. Why would you want to screenshot an entire webpage? 4. 5.

It's Time to Get Smart About Smart Phone Safety on Android -- PARSIPPANY, N.J., Aug. 17 PARSIPPANY, N.J., Aug. 17 /PRNewswire/ -- A new Android productivity application - PhoneQ - is announced by Macrosoft, a leading-edge software design and development organization. Like Macrosoft's other Android applications, PhoneQ is designed for "on the go" mobile professionals. The PhoneQ application allows you to queue the phone calls that you want to make from your Google contact list, Google calendar or a manually developed call list. Once the calls are placed in the queue, PhoneQ will begin to dial out. PhoneQ also allows you to designate specific times for your Android phone to place calls. PhoneQ is the result of some very scary statistics: according to a study conducted by the Virginia Tech Transportation Institute (VTTI), a car driver dialing a cell phone is 2.8 times more likely to get into a crash than a non-distracted driver, and a truck driver is 5.9 times more likely to crash. PhoneQPro is also available now in the Android Market for $4.99. About Macrosoft

Cell phones: A love/hate relationship - by Elizabeth M. Young Elizabeth M Young's image for: "Cell Phones a Lovehate Relationship" Caption: Location: Image by: Humans do have a love/hate relationship with cell phones, whether they have a cell phone or not. We hate our cell phones because there are glitches, difficulties and learning curves that must be overcome. The glitches include the classic dropped calls, dead batteries and size issues that make it incredibly easy to lose a phone. The difficulties include having to talk to someone who is talking with a cheap bluetooth device, where wind sounds and other external noises make the conversation intolerable. But a police detective, contractor, doctor or other person who needs to send and receive information while on the road loves their cell or smart phone. Then there is the constant intrusion that cell phones allow. But this intrusion can save a life, help to find a missing person, get emergency help, bring criminals to justice and get the news out fast. We adore our smart phones.

Otterbox Defender Case for iPhone 4 is shipping Aug 20 2010, 3:00pm CDT | by Susan McGlaun The Otterbox Case is available at Amazon for $38.37 and is finally shipping. It is what many iPhone 4 owners have been waiting for the Otterbox Defender Case for the iPhone 4. It has an innovative three layer design that protects your iPhone from pumps, drops, scratches and dust while keeping your iPhone fresh an new. The Otterbox Case is available at Amazon for $38.37. I4U News brings you daily shopping tips on new releases, pre-orders, hot deals, sales events and unique gadgets. Updates Shopping Deals Susan McGlaunSusan is the editor of the shopping guide on I4U News. Comments

List of mobile network operators of the Asia Pacific region This is a list of all mobile phone carriers in the Asia Pacific Region and their respective number of subscribers. There are an estimated 2.6 billion mobile phones activated through various carriers in the region. Afghanistan[edit] As of June 2015[update], the penetration rate in Afghanistan was estimated at 77%: 24.53[1] millions subscribers over a population estimate of 31.8 million. The country's telecom regulator is the Afghanistan Telecommunications Regulatory Authority (ATRA). American Samoa[edit] As of 2004[update], American Samoa has 32,000 subscribers in total,[4] or an 85% penetration rate. Australia[edit] As of March 2011[update], the number of mobile phone subscriptions in Australia was recorded to be 29.28 million which corresponds to a penetration rate of 129.482% over an estimated population of around 21.8 million.[5][6] The country's telecom regulator is the Australian Communications and Media Authority. Bangladesh[edit] Bhutan[edit] Brunei Darussalam[edit] Cambodia[edit] Fiji[edit]

Ask Maggie: On being patient and keeping smartphones secure | Signal Strength They say patience is a virtue. But it's certainly not easy, especially when you are waiting for the latest and greatest in technology. This week I try to answer one reader's question about when he can expect to get Fios TV in his neighborhood. He's seen the fiber trucks and fliers promoting the service, and now he wants his Fios TV. But laying the fiber is only half the battle, especially in densely populated cities such as New York City where everyone lives in an apartment building. If waiting for Fios wasn't bad enough, another reader wants to know whether he should buy the Apple iPad today or wait. Finally, I answer a question about smartphone security, as more software vulnerabilities and malicious code are found on mobile devices. Ask Maggie is a weekly advice column that answers readers' wireless and broadband questions. Praying for Fios TV Dear Maggie, Do you have any idea when Verizon Fios might be coming to Park Slope, Brooklyn? Thanks, Jorge iPad now or wait?

About Us - Lookout Mobile Security Lookout was founded in 2007 by John Hering, James Burgess, and Kevin Mahaffey with the premise that to properly protect people and enterprises from mobile attacks, we needed a new approach to security – one that is rooted in data analysis, operates at incredible scale and relies on predictive machine intelligence. Today, our cloud-based technology is fueled by a global sensor network of more than 100 million sensors and tens of thousands of apps that are added daily – giving us access to virtually all the mobile code in the world. With this scale and the predictive machine intelligence to analyze and make sense of the data, Lookout can identify connections that would otherwise go unseen and stop cybercriminals from attacking mobile devices. Built entirely and only for mobile, we're laser-focused on creating products that serve and delight not just IT administrators and CSOs, but individuals as well.