D.school: Institute of Design at Stanford 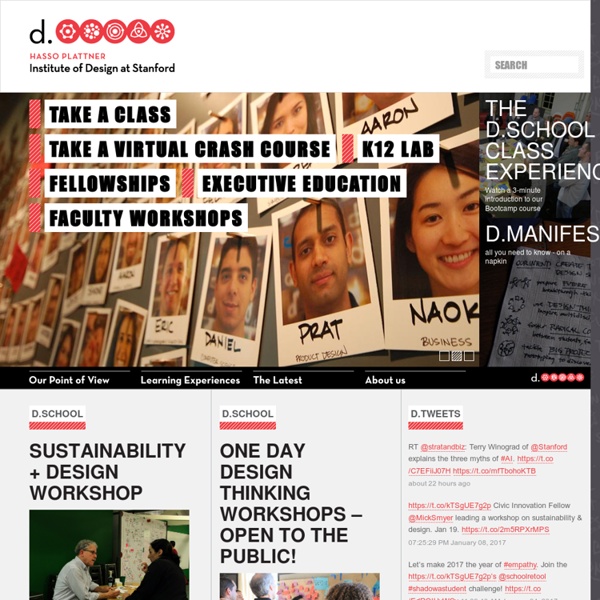 Featured Fellows applications are now open! We’re now accepting applications for the d.school fellowship program for the academic year 2014-15. This year, we are looking for restless experts in the fields of K12 education and health care. Ideal candidates will be mid-career professionals and entrepreneurs with the potential to drive systems-level change. If you’re dedicated to improving either of these areas, read on!

ID-Studiolab: : introduction Contextmapping tools are varied, and include tools that were previously thought to be the domain of professional designers, including visioning tools, visual thinking tools, but also traditional research tools as observations and interview. Using the tools calls upon the design and research skills of users and researchers. Contextmapping is a procedure for conducting contextual research with users, where tacit knowledge is gained about the context of use of products. It aims to inform and inspire design teams, where users and stakeholders actively participate in the design process to ensure a good fit between the design and the use of a product. The aim is not just to uncover user insights, but also to carry this through in product concepts and product development.

Inventing the Collaborative Workspace - Adam Richardson Most corporate buildings don’t do a good job of supporting collaboration, brainstorming, and innovative work methods. They tend to be dominated by cubicles or offices which are suited for individual work, or by hard-to-book conference rooms that teams can use but only for short periods of time. What’s needed is a more flexible space that better supports teams and inspires more open thinking. These are common at design firms such as frog where I work, but rare in corporate settings. I recently saw one such space when I was invited to give a talk at Citrix, the Silicon Valley-based maker of GoToMeeting and virtualization and cloud software, as part of their Design Salon speaker series. The talk was held in the company’s recently completed design collaboration space, a large open area where multiple disciplines can come together to innovate.

About Public Lab The Public Laboratory for Open Technology and Science (Public Lab) is a community -- supported by a 501(c)3 non-profit -- which develops and applies open-source tools to environmental exploration and investigation. By democratizing inexpensive and accessible Do-It-Yourself techniques, Public Lab creates a collaborative network of practitioners who actively re-imagine the human relationship with the environment. The core Public Lab program is focused on "civic science" in which we research open source hardware and software tools and methods to generate knowledge and share data about community environmental health. Our goal is to increase the ability of underserved communities to identify, redress, remediate, and create awareness and accountability around environmental concerns.

Evaluation Within Project-Based Learning No test, grade, or teacher evaluation could have come close to helping her learn that deeply, and it made clear to me how important it is for teachers to reexamine why and how we grade our students if we truly care about their success. As collaboration and project-based learning become preeminent ways of teaching and learning, many teachers struggle with how to evaluate these types of lessons. Traditional methods of evaluation, which have many flaws on their own, are not well-suited for interdisciplinary, multi-modal learning. PhD Projects Changing Atmospheres in Interaction Design This PhD project will investigate how computer technology can be used to rethink the concept of furniture and discover new aesthetic potential by developing prototypes. - Sofie Kinch, Aarhus School of Architecture Co-design: Performativity, intervention and dialogue

Collaboration Is a Team Sport, and You Need to Warm Up - Adam Richardson This post is part of the HBR Insight Center Making Collaboration Work. Jimmy Guterman wrote about Nokia’s culture of purposefully fostering a collaborative mindset as soon as someone started at the company or moves into a new role. I want to build on this by looking at how collaboration needs to be seen as a process that happens over time, and that the crucial groundwork for successful collaboration needs to be laid before the “actual” collaborative work happens. First, let’s ask why collaboration is so important today. The main reason is that the problems we have to solve — whether deciding company strategy or bringing an innovative offering to market — are more complex than they have ever been. They require a variety of skillsets, perspectives, and approaches to solve them, and need a lot of pieces to come together smoothly to be successful.

Best of British: Fashion Designers The first ever couturier was British. Granted, Charles Frederick Worth worked in Paris, but he was born in Bourne, England in 1825 before heading to the French capital to become the favoured designer of Napoleon III’s court, where he drew upon the history of costume to create elaborate, lavish gowns. Over the past 150 years fashion has moved way beyond Worth’s spangled silk tulle and corsets, and some of the most progressive style movements have been down to British designers. They were responsible for the Swinging Sixties and Punk after all. So as we celebrate Queen Elizabeth II’s diamond jubilee, we thought we’d also take a look at some of the most influential fashion designers her United Kingdom has produced…

Education Education is the means by which we thrive, individually and collectively. In recent times, the growing complexity and interconnectedness of our now global society has challenged the effectiveness of traditional education systems, which were designed for the needs of the industrial era. The old model was built upon the idea that a worker’s job was to apply the basic skills they’d learned in school to specific tasks. To thrive in the 21st century, however, we need to go beyond that—and teach people how to learn, engage, and create. As Einstein said, “We can’t solve problems by using the same kind of thinking we used when we created them.” The new model is about the constant creation of knowledge and empowering individuals to participate, communicate, and innovate. 20 Best Augmented Reality Apps - Play. Enjoy. Learn Virtual Reality vs Augmented Reality Virtual reality, or VR, has a reputation for being for hardcore gamers. You know: the serious tech heads who don’t think it’s at all strange to sit in a room with a giant set of black goggles over their eyes and interact with people, places, and things that don’t actually exist. For the rest of us, there’s probably a healthy curiosity about VR, but it’s not to the point where we’re willing to spend a few hundred pounds on a serious piece of equipment.

21 Inspirational Collaboration Workspaces If your company isn't thinking about collaboration and creating an office design centered around collaboration, chances are that the office you've built is stuck in the doldrums. These days everyone wants to collaborate with other - it can help improve work by getting more minds thinking about the same problem, and it can be a fun, social experience where employees build community ties. According to a recent Gensler study, top companies tend to organize offices using collaboration as a key building block. But of course, collaborative spaces aren't built simply by putting people next to one another - but are instead an intentional space with the tools necessary for collaborative activities. Below are a few examples from a wide variety of companies.