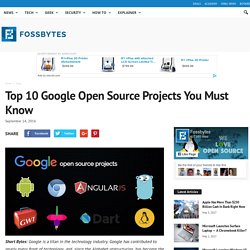 So, let’s tell you more about them! Top 10 Google Open Source Projects Android: As of Google I/O 2015, there were 1.4 billion devices connected to the internet running Android. This means that Android is the most popular operating system in the world, even outranking Windows. Google Launches New Open Source Website. Short Bytes: Technology giant Google has released a new open source website to showcase its open source projects. 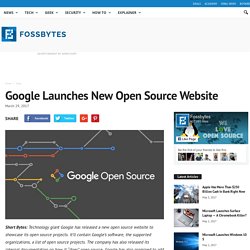 It’ll contain Google’s software, the supported organizations, a list of open source projects. The company has also released its internal documentation on how it “does” open source. Google has also promised to add more projects to the website in the near future. The usage of free and open source software by technology giants is becoming more and more common with each passing day. In the past, we’ve told about the top open source projects from the likes of Google, Facebook, Twitter, Microsoft, etc. In its announcement post, Google says that free and open source software has been a part of its technical foundation since Google’s beginnings. 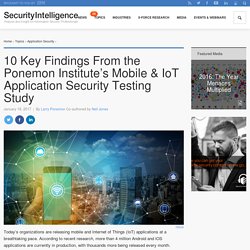 According to recent research, more than 4 million Android and iOS applications are currently in production, with thousands more being released every month. IBM client Cisco, meanwhile, predicted that the estimated value of the global IoT market will reach $14.4 trillion by 2022 and that organizations will invest more than $2 trillion into IoT initiatives. 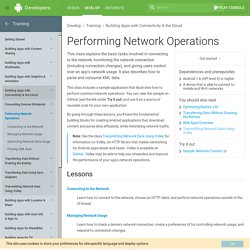 It also describes how to parse and consume XML data. This class includes a sample application that illustrates how to perform common network operations. You can view the sample on GitHub (see the link under Try it out) and use it as a source of reusable code for your own application. By going through these lessons, you'll have the fundamental building blocks for creating Android applications that download content and parse data efficiently, while minimizing network traffic. Note: See the class Transmitting Network Data Using Volley for information on Volley, an HTTP library that makes networking for Android apps easier and faster. Bonjour Gatekeeper: How to implement Bonjour service in an iOS or Android app. #import "EVBViewController.h" 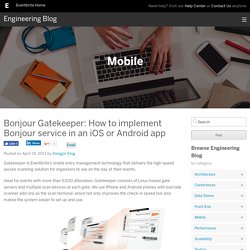 How can I discover zeroconf (Bonjour) services on Android? I'm having trouble with jmDNS. Bonjour implementation on Android. Bonjour in Android applications. What is Bonjour? 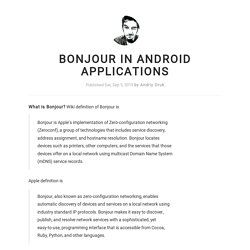 Wiki definition of Bonjour is Bonjour is Apple’s implementation of Zero-configuration networking (Zeroconf), a group of technologies that includes service discovery, address assignment, and hostname resolution. Bonjour locates devices such as printers, other computers, and the services that those devices offer on a local network using multicast Domain Name System (mDNS) service records.

Apple definition is Bonjour, also known as zero-configuration networking, enables automatic discovery of devices and services on a local network using industry standard IP protocols. In other words, Bonjour is a software component that is used for other devices discovery (PC, Mac, smartphones, printers, etc) in a network via all available interfaces. Developing IoT apps: finding your IoT devices with Android.

Java - How to get IP address and names of all devices in local network on Android. Getting Started with OpenHAB Home Automation on Raspberry Pi. Advertisement OpenHAB is a mature, open source home automation platform that runs on a variety of hardware and is protocol agnostic, meaning it can connect to nearly any home automation hardware on the market today. 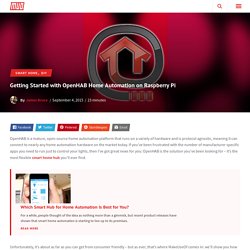 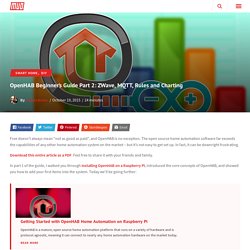 The open source home automation software far exceeds the capabilities of any other home automation system on the market – but it’s not easy to get set up. In fact, it can be downright frustrating. Download this entire article as a PDF. Feel free to share it with your friends and family. In part 1 of the guide, I walked you through installing OpenHAB on a Raspberry Pi, introduced the core concepts of OpenHAB, and showed you how to add your first items into the system. Raspberry Pi: The Unofficial Tutorial. Advertisement Get to know the world’s favorite $25 computer: the Raspberry Pi. 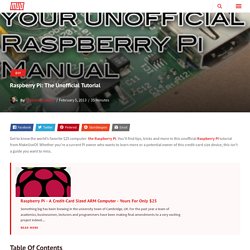 For the past year a team of academics, businessmen, lecturers and programmers have been making final amendments to a very exciting project indeed.... PIC Tutorial. You may know that when it comes to machines, programming is often used to tell the machine how to interact with its world. 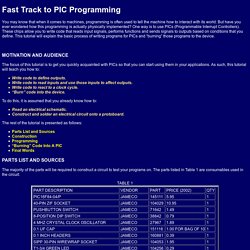 But have you ever wondered how this programming is actually physically implemented? One way is to use PICs (Programmable Interrupt Controllers). These chips allow you to write code that reads input signals, performs functions and sends signals to outputs based on conditions that you define. This tutorial will explain the basic process of writing programs for PICs and “burning” those programs to the device. The focus of this tutorial is to get you quickly acquainted with PICs so that you can start using them in your applications. //Serial communication between ARDUINO and/or node MCU - Program of Master // - Pastebin.com. Meet the Arduino Killer: ESP8266.

Advertisement Wi-Fi is an essential bit of kit for any Internet of Things (IoT) DIY projects, but our favorite Arduino doesn’t come with Wi-Fi, and adding in a Wi-Fi shield can bring the total cost to around $40. What if I told you a there’s an Arduino-compatible dev board with built-in Wi-Fi for less than $10? Well, there is. Meet the Arduino Killer: ESP8266. It was only a matter of time before the crown was stolen from the shiny head of our dear Arduino development board.

Catchy names aside, the ESP8266 (also known as NodeMCU) was originally marketed as a low cost Wi-Fi add-on for Arduino boards, until the hacker community realized you could cut the Arduino out of the equation entirely. In less than a year, the ESP8266 has rocketed in popularity, and is now so well supported and developed that if you’re currently using Arduino, you need to stand up and take note.

9 Things You Wanted to Know About Raspberry Pi. Advertisement Ever since it first launched, the Raspberry Pi has caught the attention of every hobbyist, engineer, and geek out there. A proper computer for just $35? Interfacing DS18B20 Temperature Sensor with AVR ATmega8 Microcontroller. 5 Fatal Relationship Mistakes - Page 3 of 3. Is The USA Prepping For Mass Death And Hysteria? This Shocking Find Might Be A Clue!

Robotic Vision. The aim of Robotic vision is to develop your skills and knowledge of the fundamental mathematics and algorithms that underpin computer vision, including how to interpret images to determine the size, shape and color of objects in the scene. Learning outcomes By the end of this course you should be able to: If you do the optional project you should also be able to: apply the mathematical and algorithmic and control principles of computer vision to implement a working vision system. If you have studied Introduction to robotics (MOOC) and completed the optional project you should also be able to: integrate the vision system with the robot arm to create a functional robot which can recognise the desired object and use commands to move to it.

Schedule of learning Getting started Use the time before lectures start to prepare for the course and become a part of the learning community by: Week 1 Robotic visionGetting images into a computer. Dragino LoRa Shield - support 868M frequency. The Dragino LoRa Shield is a long range transceiver on a Arduino shield form factor and based on Open source library.The LoRa Shield allows the user to send data and reach extremely long ranges at low data-rates.It provides ultra-long range spread spectrum communication and high interference immunity whilst minimising current consumption.

The LoRa Shield based on RFM95W targets professional wireless sensor network applications such as irrigation systems, smart metering, smart cities, smartphone detection, building automation, and so on. Using Hope RF’s patented LoRa™ modulation technique the LoRa Shield can achieve a sensitivity of over -148dBm using a low cost crystal and bill of materials.

The high sensitivity combined with the integrated +20 dBm power amplifier yields industry leading link budget making it optimal for any application requiring range or robustness. These devices also support high performance (G)FSK modes for systems including WMBus, IEEE802.15.4g. Samsung's Smart Home system smartphone app turns off lights and home appliances. A command of ‘going out’ will turn off devices and the lightsSamsung's Smart Home system has been unveiled by Samsung at the US Consumer Electronics Show (CES) in Las VegasUsers will be able to access the company's system via its Galaxy Gear smartwatch, TV remote control, smartphones or a computer app By Sean Poulter, Consumer Affairs Editor. Buy Products Online at Best Price in India - All Categories. Buy Products Online at Best Price in India - All Categories.

What to expect from smart homes. Smart home kit booklet. 5 Gadgets To Turn Your House Into Smart-Home.