Are You Living in a Computer Simulation? 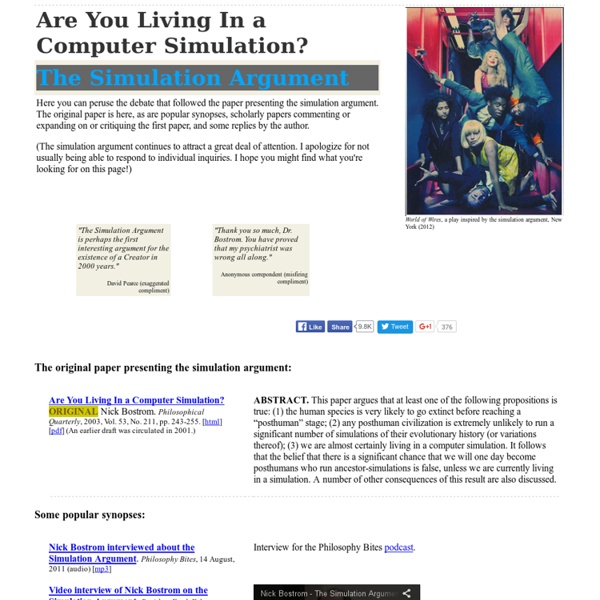 Ships Captain's Medical Guide The Ship Captain's Medical Guide The Ship Captain’s Medical Guide is intended primarily for use on ships where no doctor is carried and it is necessary for laymen to assess and treat injuries and to diagnose and treat ill health. The Guide can also be recommended for use in other situations where professional medical advice is not readily available, for example on expeditions. For the 22nd edition the Guide has been comprehensively reviewed and updated. It contains a wide range of authoritative advice – from birth to death, from first aid, general nursing, hygiene and the prevention of disease, to the treatment of injuries and diseases.

How to Build a Universe That Doesn't Fall Apart Two Days Later First, before I begin to bore you with the usual sort of things science fiction writers say in speeches, let me bring you official greetings from Disneyland. I consider myself a spokesperson for Disneyland because I live just a few miles from it—and, as if that were not enough, I once had the honor of being interviewed there by Paris TV. For several weeks after the interview, I was really ill and confined to bed. I think it was the whirling teacups that did it. Elizabeth Antebi, who was the producer of the film, wanted to have me whirling around in one of the giant teacups while discussing the rise of fascism with Norman Spinrad... an old friend of mine who writes excellent science fiction. We also discussed Watergate, but we did that on the deck of Captain Hook's pirate ship.

Roll it Experimental Housing / University of Karlsruhe Roll It, a cool experimental house, resulted from the collaboration among different institutes within the University of Karlsruhe. This cyclindrical design is a modular protype that provides flexible space within a minimum housing unit. Three different sections are dedicated to different functional needs: there’s a bed and table in section, an exercise cylinder, and a kitchen with a sink. More images and more about the prototype after the break. Structurally, the prototype includes an outer shell with the four support rings over a rigid inner shell. A translucent membrane envelops the entire form and serves as advertising space for sponsors.

7 Must-Read Books on Time by Maria Popova What the second law of thermodynamics has to do with Saint Augustine, landscape art, and graphic novels. Time is the most fundamental common denominator between our existence and that of everything else, it’s the yardstick by which we measure nearly every aspect of our lives, directly or indirectly, yet its nature remains one of the greatest mysteries of science.

15 MORE Free Guides That Really Teach You USEFUL Stuff During 2010, we’ve written a bunch of new PDF manuals for you, on all kinds of subjects, from Facebook privacy to Dropbox tips. After releasing 15 NEW manuals resulting in hundreds of thousands downloads we thought it was about time to look back and review them. If you’re a long time reader you probably know that we did a similar roundup last year. Enjoy! MEME : Gratuitous Grace Aldous and I would give a (LSD) session to a friend or someone who wanted and the preparation for a session was very very careful. The day before we didnt do anything we just fixed the house very quietly, the day of the session there was nothing except that and even the day after; so there was a three day thing because as Aldous wrote in Island the session is a gratuitous grace. Its what you take away from there. A gratuitous grace, something thats given to you for nothing, not that you merit it you just are lucky and get it but what you do with it afterwards is what counts. Laura Archera Huxley 'Liberation,' Dr Robert began again, 'the ending of sorrow, ceasing to be what you ignorantly think you are and becoming what you are in fact.

2010 May 19 - Milky Way Over Ancient Ghost Panel Discover the cosmos! Each day a different image or photograph of our fascinating universe is featured, along with a brief explanation written by a professional astronomer. 2010 May 19 Rich, Black, Flunking The black parents wanted an explanation. Doctors, lawyers, judges, and insurance brokers, many had come to the upscale Cleveland suburb of Shaker Heights specifically because of its stellar school district. They expected their children to succeed academically, but most were performing poorly. African-American students were lagging far behind their white classmates in every measure of academic success: grade-point average, standardized test scores, and enrollment in advanced-placement courses. On average, black students earned a 1.9 GPA while their white counterparts held down an average of 3.45.

Deep Time : A History of the Earth - Interactive Infographic Life on the planet started astonishingly early. The first living organisms, in the current model of evolution, are thought to be Prokaryotes1. The oldest known fossilised prokaryotes have been dated to approximately 3.5 billion years ago, only 1 billion years after the formation of the Earth's crust. Eukaryotes2 are more advanced organisms with complex cell structures, each of which contains a nucleus. 15 Modern Bathtubs January 14, 2010 by Thomas Hardy Vascabarca Boat Shaped Bathtub Source LTT Illuminated Bathtub Top 20 World Most Beautiful Living Spaces 03 Mar 2013 March 3, 2013 If you are browsing internet for Home Ideas, Decoration and Remodeling Tips you are on the right place. In today’s article we collected the top 20 most beautiful living spaces around the world. I am sure you will hate your apartment after checking out the images bellow. Starting from Switzerland, across America and up to Australia, there’s no better interior designs that the ones we collected and attached in the gallery bellow.

Manga farming 12 Apr 2010 Tokyo-based artist Koshi Kawachi recently demonstrated his "Manga Farming" technique -- which uses old manga as a growing medium for vegetables -- by cultivating a crop of radish sprouts in an installation at the Matsuzakaya department store in Nagoya. [Link: Koshi Kawachi] In Denmark, a printable house (Credit: Eentileen’s Print a House project) Danish architects Frederik Agdrup and Nicholas Bjorndal of Eentileen used just a computer, a “printer” — actually, a computer numerical control (CNC) machine — and 820 sheets of plywood to build a 125 square meter (1,345 square foot) home in four weeks. Named Villa Asserbo, the home is the pilot project of Eentileen’s Print a House project. The designers are touting the process of mass-customizing houses and responsibly producing them on site.

02.22.2010 - An afternoon nap markedly boosts the brain’s learning capacity If you see a student dozing in the library or a co-worker catching 40 winks in her cubicle, don’t roll your eyes. New research from the University of California, Berkeley, shows that an hour’s nap can dramatically boost and restore your brain power. Indeed, the findings suggest that a biphasic sleep schedule not only refreshes the mind, but can make you smarter. Students who napped (green column) did markedly better in memorizing tests than their no-nap counterparts.

Sup.. Checkd out your pearls.. Nice.. Where you from by darelphilip Jul 21

hi buddy am new chek my pearls too :) by rinisaha Jul 19