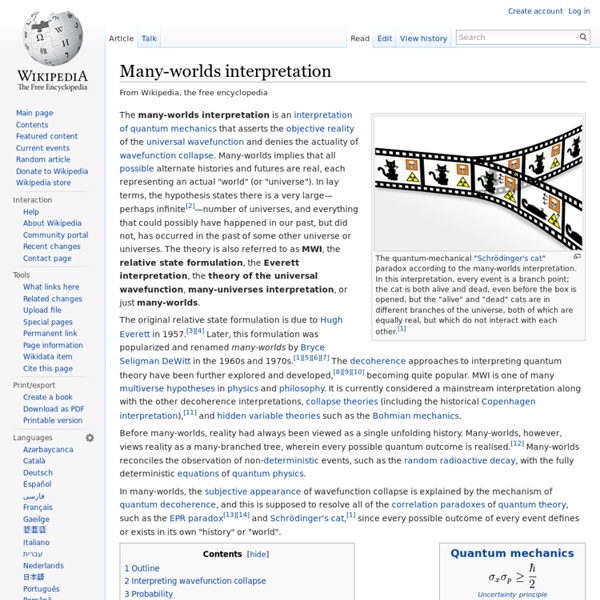 The quantum-mechanical "Schrödinger's cat" paradox according to the many-worlds interpretation. In this interpretation, every event is a branch point; the cat is both alive and dead, even before the box is opened, but the "alive" and "dead" cats are in different branches of the universe, both of which are equally real, but which do not interact with each other.[1] The many-worlds interpretation is an interpretation of quantum mechanics that asserts the objective reality of the universal wavefunction and denies the actuality of wavefunction collapse. Many-worlds implies that all possible alternate histories and futures are real, each representing an actual "world" (or "universe"). In lay terms, the hypothesis states there is a very large—perhaps infinite[2]—number of universes, and everything that could possibly have happened in our past, but did not, has occurred in the past of some other universe or universes. Outline[edit] Interpreting wavefunction collapse[edit] Probability[edit] where

Unexpected hanging paradox The unexpected hanging paradox, hangman paradox, unexpected exam paradox, surprise test paradox or prediction paradox is a paradox about a person's expectations about the timing of a future event (e.g. a prisoner's hanging, or a school test) which he is told will occur at an unexpected time. Despite significant academic interest, there is no consensus on its precise nature and consequently a final 'correct' resolution has not yet been established.[1] One approach, offered by the logical school of thought, suggests that the problem arises in a self-contradictory self-referencing statement at the heart of the judge's sentence. Another approach, offered by the epistemological school of thought, suggests the unexpected hanging paradox is an example of an epistemic paradox because it turns on our concept of knowledge.[2] Even though it is apparently simple, the paradox's underlying complexities have even led to it being called a "significant problem" for philosophy.[3] Some authors[who?]

Hong–Ou–Mandel effect Quantum-mechanical description[edit] Physical description[edit] When a photon enters a beam splitter, there are two possibilities: it will either be reflected or transmitted. The relative probabilities of transmission and reflection are determined by the reflectivity of the beam splitter. Quantum tunnelling Quantum tunnelling or tunneling (see spelling differences) is the quantum mechanical phenomenon where a subatomic particle passes through a potential barrier. Quantum tunneling is not predicted by the laws of classical mechanics where surmounting a potential barrier requires enough potential energy. Quantum tunnelling plays an essential role in several physical phenomena, such as the nuclear fusion that occurs in main sequence stars like the Sun.[1] It has important applications in the tunnel diode,[2] quantum computing, and in the scanning tunnelling microscope.

David Deutsch David Elieser Deutsch, FRS (born 1953 in Haifa, Israel) is a British physicist at the University of Oxford. He is a non-stipendiary Visiting Professor in the Department of Atomic and Laser Physics at the Centre for Quantum Computation (CQC) in the Clarendon Laboratory of the University of Oxford. He pioneered the field of quantum computation by formulating a description for a quantum Turing machine, as well as specifying an algorithm designed to run on a quantum computer.[2] He is a proponent of the many-worlds interpretation of quantum mechanics. Career[edit]

Negative probability The probability of the outcome of an experiment is never negative, but quasiprobability distributions can be defined that allow a negative probability for some events. These distributions may apply to unobservable events or conditional probabilities. Physics[edit] In 1942, Paul Dirac wrote a paper "The Physical Interpretation of Quantum Mechanics"[1] where he introduced the concept of negative energies and negative probabilities: "Negative energies and probabilities should not be considered as nonsense. One-electron universe The one-electron universe hypothesis, commonly associated with Richard Feynman when he mentioned it in his Nobel lecture,[1] postulates that there exists only a single electron in the universe, propagating through space and time in such a way as to appear in many places simultaneously. History[edit] Feynman's thesis advisor, John Wheeler, proposed the hypothesis in a telephone call to Feynman in the spring of 1940. He excitedly claimed to have developed a neat explanation of the quantum mechanical indistinguishability of electrons: As a by-product of this same view, I received a telephone call one day at the graduate college at Princeton from Professor Wheeler, in which he said, "Feynman, I know why all electrons have the same charge and the same mass" "Why?"

The 'molecular octopus': A little brother of 'Schroedinger’s cat' For the first time, the quantum behaviour of molecules consisting of more than 400 atoms was demonstrated by quantum physicists based at the University of Vienna in collaboration with chemists from Basel and Delaware. The international and interdisciplinary team of scientists has set a new record in the verification of the quantum properties of nanoparticles. In addition, an important aspect of the famous thought experiment known as 'Schroedinger's cat' is probed. However, due to the particular shape of the chosen molecules the reported experiment could be more fittingly called 'molecular octopus'. The researchers report their findings in Nature Communications. 'Schroedinger's cat': simultaneously dead and alive?