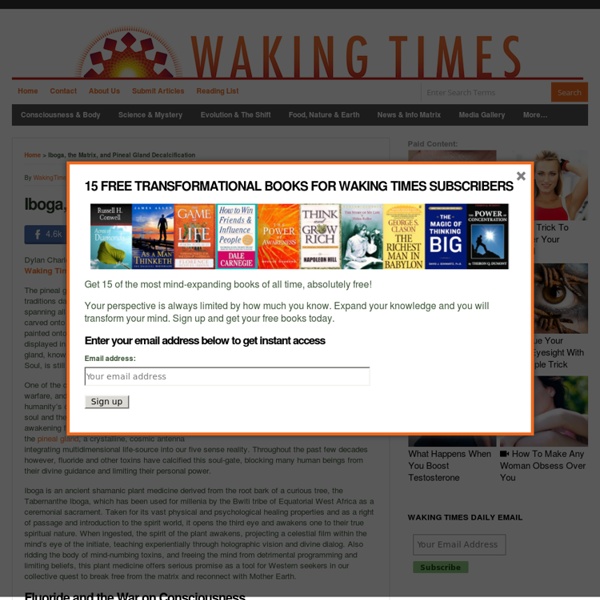 Dylan Charles, StaffWaking Times The pineal gland has been at the core of spiritual traditions dating back thousands of years, spanning all inhabited continents. Prominently carved onto Buddhist statues, ceremoniously painted onto tribal faces, and deceptively displayed in the Vatican square, the pineal gland, known as the Third Eye, or Seat of the Soul, is still shrouded in mystery. One of the culprits to the endless poverty, warfare, and illness in society today lies in humanity’s collective disconnection from their soul and their true divine nature. The key to awakening from this destructive dream lies in the pineal gland, a crystalline, cosmic antenna integrating multidimensional life-source into our five sense reality. Throughout the past few decades however, fluoride and other toxins have calcified this soul-gate, blocking many human beings from their divine guidance and limiting their personal power. Fluoride and the War on Consciousness Click to Enlarge Holographic Teachings Sources: Related:  Types

Salvia Divinorum Smoking tobacco is injurious to health, yet people continue doing so. However, the trends of smoking have changed in the recent past and now people are using herbal smoke methods to induce benefits. Inducing herbs in any way is not dangerous since they are natural, therapeutic and beneficial sources of treatment for various health conditions. Not only can herbal smoking benefit you physically, but can be beneficial for your mental well-being as well. Salvia Divinorum, a popular herb, is also being used widely for smoking as a substitute to tobacco. Herbal smoking is also called legal bud smoking. Wide assortments of these herbs have been regarded as legal buds. Some of the most popular herbs used in this process include Salvia Divinorum, chamomile, hops, ginseng, damiana, kava kava, passion flower, wild dagga, skullcap, star of Bethlehem, scotch broom tops, artemisia vulgaris, betel nut powder, and various others.

The Sacred Root Back to Don's Maps This page is supported by Intervention Support The sacred root is not Datura, however there is reason for thinking that Jean used at least the physical form and growth habits of mandrake when she created her "sacred root". My thanks to Toos Spee for drawing this to my attention. The name Mandragora is derived from two Greek words implying 'hurtful to cattle. ' The Arabs call it 'Satan's apple.' It has a large, brown root, somewhat like a parsnip, running 3 or 4 feet deep into the ground, sometimes single and sometimes divided into two or three branches. The leaves are quite harmless and cooling, and have been used for ointments and other external application. The fresh root operates very powerfully as an emetic and purgative. Mandrake was much used by the Ancients, who considered it an anodyne and soporific. Mandrake was used in Pliny's days as an anaesthetic for operations, a piece of the root being given to the patient to chew before undergoing the operation. 30:14.

5 Things That will Happen when MDMA Becomes Legal Scientists are fascinated by MDMA. Profound feelings of love, empathy, and compassion for one’s self and others are the markers of a peak MDMA experience. And while it’s best known for being an ubiquitous party drug, MDMA has also contributed significantly to psychotherapy. But MDMA is illegal, classified as a Schedule 1 substance, and the resulting dangers get in the way of truly understanding the full range of its benefits. Emanuel Sferios, founder of DanceSafe and long-time harm reduction activist and drug educator, seeks to raise awareness about the importance of legalization in his documentary “MDMA: The Movie.” Here are 5 things that will happen when MDMA becomes legal: 1. The drug alters brain activity so users can approach their problems in a very different way. The combined effects make it useful for therapy, which is why, despite its illegality, there have been a number of FDA-approved studies for the treatment of severe PTSD. 5.

Salvia Divinorum: Key to the Multiverse? One of the most commonly occurring phenomena that I experience while in Salvia Space, is variations on multiple images of reality, of the room I am meditating in. (I have become able to experience eyes-open visions that interact with actual reality after a lot of practice resisting the very powerful "pull" of the drug as it is taking effect.) I've seen multiple images of the room "displayed" as a giant rolling "rolodex" of images.

San Pedro: One Of Mother Nature’s Most Powerful Psychedelics Alanna Ketler, Collective-EvolutionWaking Times Trichocereus Pachanoi, aka San Pedro, is a columnar cactus native to the Andean mountains of Peru, and Ecuador. Some of the indigenous names for San Pedro are: huachuma, chuma, and wachuma. It is one of the four most sacred plants of Peru, along with Tobacco, Ayahuasca and Coca. San Pedro has hallucinogenic properties and is often compared to the more popular cactus known as Peyote; both are members of the mescaline family. The natives and Shamans typically prepare the San Pedro by slicing and then boiling pieces of the stem for a few hours; afterwards the liquid that is left is taken orally. The effects that are felt from the ‘high’ of this cactus are quite spiritual. More recently San Pedro cactus has been used to treat a broad range of physical, mental and emotional disorders, as well as people with addictions such as alcoholism. To learn more about this sacred plant please check out the sources below. About the Author Hi, I’m Alanna!

Erowid Morning Glory Vault: Basics The seeds of several varieties of Morning Glory (Ipomoea violacea) contain a naturally occurring indole called Lysergic Acid Amide (LSA), which is closely related to LSD. Seeds are taken orally, and can be eaten whole or the active alkaloids can be extracted. The most common active varieties of seeds are Heavenly Blue, Pearly Gates, and Flying Saucers. Threshold effects of LSA can be reached with as few as 25-50 seeds, though most recreational users find it necessary to ingest between 100 and 400 seeds to reach desired effects. When purchased in individual packets, $1-3 for 30-50 seeds. Although LSA is a schedule III substance in the United States, Morning Glory seeds and plants are sold at just about every nursery, garden store, or botanical supply store that you can find. The seeds of Ipomoea violacea contain about 0.1% ergot alkaloids, including ergotmetrine, chanoclavine and lysergol. Pharmacology Summary Needed. Production Summary Needed. The Substance: The Experience:

Rivea Corymbosa Shamanic Extracts The sacred Aztec hallucinogen " Ololiuhqui " is perhaps the best kept secret for the outside world today, strange enough Ololiuhqui is widely used among the local Indians in Sierra Madre, Oaxacan Mexico. The local Mazatecas use the Rivea corybosa seeds for divination when the Teonanacatl Mushrooms are not available. Rivea corybosa grows easily and abundantly in the mountains of southern Mexico. Traditional uses : The seeds are used for their psychedelic purposes by the Aztec priests in order to commune with their gods. Hoffman reported in 1960 that he had isolated d-lysergic acid amide (LA) and d-isolysergic acid amide from the seeds of Rivea corymbosa and Ipomoea violacea. ref : Rivea corymbosa (L.)

The Future of DMT Research 8th March 2016 By Luke Sumpter Guest Writer for Wake Up World N-dimethlytryptamine, or DMT, is a psychedelic tryptamine that is structurally similar to serotonin. In 1990 Dr. The book raised just as many questions as it offered answers, antagonizing the philosophical and scientific arenas of human consciousness, perception and even dabbling in the realms of alien abduction and dark matter. I spoke to Dr. Luke Sumpter: Dr Strassman, you work at the University of New Mexico is the most detailed DMT research in existence. Dr. Positing a spectrum of inner/outer in this regard, one may be seeing only a reflection of one’s own mind-brain complex in the DMT visions at one end, and at the other, apprehending previously invisible but objectively real and freestanding alternate levels of reality. Luke Sumpter: Based upon these conclusions, how do you envision the future of DMT research? Dr. Luke Sumpter: Do you regard DMT might harbor a clinical and therapeutic potential? Dr. Dr. Dr. Dr. Dr. Dr.