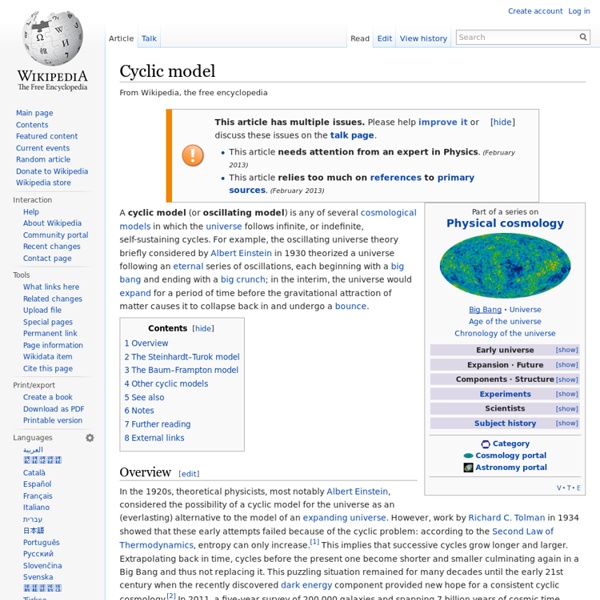 A cyclic model (or oscillating model) is any of several cosmological models in which the universe follows infinite, or indefinite, self-sustaining cycles. For example, the oscillating universe theory briefly considered by Albert Einstein in 1930 theorized a universe following an eternal series of oscillations, each beginning with a big bang and ending with a big crunch; in the interim, the universe would expand for a period of time before the gravitational attraction of matter causes it to collapse back in and undergo a bounce. Overview[edit] In the 1920s, theoretical physicists, most notably Albert Einstein, considered the possibility of a cyclic model for the universe as an (everlasting) alternative to the model of an expanding universe. However, work by Richard C. One new cyclic model is a brane cosmology model of the creation of the universe, derived from the earlier ekpyrotic model. Other cyclic models include Conformal cyclic cosmology and Loop quantum cosmology. See also[edit] Related:  .caisson test

The quilted universe Eternal return Eternal return (also known as "eternal recurrence") is a concept that the universe has been recurring, and will continue to recur, in a self-similar form an infinite number of times across infinite time or space. The concept is found in Indian philosophy and in ancient Egypt and was subsequently taken up by the Pythagoreans and Stoics. With the decline of antiquity and the spread of Christianity, the concept fell into disuse in the Western world, with the exception of Friedrich Nietzsche, who connected the thought to many of his other concepts, including amor fati. In addition, the philosophical concept of eternal recurrence was addressed by Arthur Schopenhauer. It is a purely physical concept, involving no supernatural reincarnation, but the return of beings in the same bodies. Premise[edit] The basic premise proceeds from the assumption that the probability of a world coming into existence exactly like our own is greater than zero (we know this because our world exists). Judaism[edit]

Dyson's eternal intelligence The intelligent beings would begin by storing a finite amount of energy. They then use half (or any fraction) of this energy to power their thought. When the energy gradient created by unleashing this fraction of the stored fuel was exhausted, the beings would enter a state of zero-energy-consumption until the universe cooled. Two recent observations have presented problems for Dyson's scenario. However, even if intelligence cannot continue its own survival indefinitely in an ever-expanding Universe, it may be able to create a `baby universe' via a wormhole in spacetime, add some DNA[original research?] See also[edit] References[edit] Level IV: Ultimate ensemble Closed timelike curve In mathematical physics, a closed timelike curve (CTC) is a world line in a Lorentzian manifold, of a material particle in spacetime that is "closed", returning to its starting point. This possibility was first raised[citation needed] by Kurt Gödel in 1949, who discovered a solution to the equations of general relativity (GR) allowing CTCs known as the Gödel metric; and since then other GR solutions containing CTCs have been found, such as the Tipler cylinder and traversable wormholes. If CTCs exist, their existence would seem to imply at least the theoretical possibility of time travel backwards in time, raising the spectre of the grandfather paradox, although the Novikov self-consistency principle seems to show that such paradoxes could be avoided. Some physicists speculate that the CTCs which appear in certain GR solutions might be ruled out by a future theory of quantum gravity which would replace GR, an idea which Stephen Hawking has labeled the chronology protection conjecture.

Level II: Universes with different physical constants Hylomorphism Hylomorphism is a philosophical theory developed by Aristotle, which conceives being (ousia) as a compound of matter and form. The word "hylomorphism" is a 19th-century term formed from the Greek words ὕλη hyle, "wood, matter" and μορφή, morphē, "form." Matter and form[edit] Aristotle defines X's matter as "that out of which" X is made.[1] For example, letters are the matter of syllables.[2] Thus, "matter" is a relative term:[3] an object counts as matter relative to something else. Change is analyzed as a material transformation: matter is what undergoes a change of form.[4] For example, consider a lump of bronze that's shaped into a statue. According to Aristotle's theory of perception, we perceive an object by receiving its form with our sense organs.[7] Thus, forms include complex qualia such as colors, textures, and flavors, not just shapes.[8] Substantial form, accidental form, and prime matter[edit] In some cases, a substance's matter will itself be a substance. Basic theory[edit]