Propane & Butane - AvantiGas. There are two types of LPG - Propane and Butane. 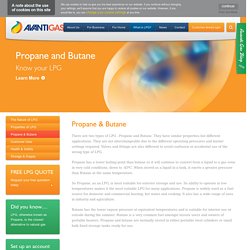 They have similar properties but different applications. They are not interchangeable due to the different operating pressures and burner settings required. Valves and fittings are also different to avoid confusion or accidental use of the wrong type of LPG. Propane has a lower boiling point than butane so it will continue to convert from a liquid to a gas even in very cold conditions, down to -45ºC. When stored as a liquid in a tank, it exerts a greater pressure than Butane at the same temperature. So Propane, as an LPG, is most suitable for exterior storage and use. Butane has the lower vapour pressure at equivalent temperatures and is suitable for interior use or outside during the summer. AEGPL - What is LPG used for?

8. – Energy supply and use. New Zealand’s natural gas is a fossil fuel, often found with oil. 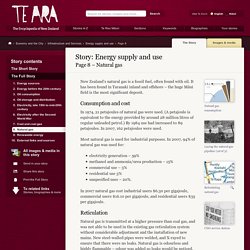 It has been found in Taranaki inland and offshore – the huge Māui field is the most significant deposit. Consumption and cost In 1974, 21 petajoules of natural gas were used. (A petajoule is equivalent to the energy provided by around 28 million litres of regular unleaded petrol.) By 1984 use had increased to 89 petajoules. Most natural gas is used for industrial purposes. Electricity generation – 59% methanol and ammonia/urea production – 15% commercial use – 3% residential use 3% unspecified uses – 20%.

In 2007 natural gas cost industrial users $6.30 per gigajoule, commercial users $16.10 per gigajoule, and residential users $35 per gigajoule. Reticulation Natural gas is transmitted at a higher pressure than coal gas, and was not able to be used in the existing gas reticulation system without considerable adjustment and the installation of new mains. Sticky problem. IGS Compressed Natural Gas. Alternative Fuel Systems Inc. The following is a brief summary highlighting the main differences of these fuels. 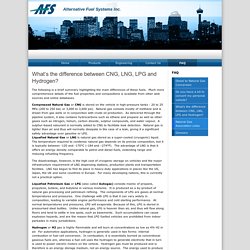 Much more comprehensive details of the fuel properties and compositions is available from other web sources and online databases. Compressed Natural Gas or CNG is stored on the vehicle in high-pressure tanks - 20 to 25 MPa (200 to 250 bar, or 3,000 to 3,600 psi). Natural gas consists mostly of methane and is drawn from gas wells or in conjunction with crude oil production. As delivered through the pipeline system, it also contains hydrocarbons such as ethane and propane as well as other gases such as nitrogen, helium, carbon dioxide, sulphur compounds, and water vapour. A sulphur-based odourant is normally added to CNG to facilitate leak detection. The disadvantage, however, is the high cost of cryogenic storage on vehicles and the major infrastructure requirement of LNG dispensing stations, production plants and transportation facilities. Compressed natural gas. Blue diamond symbol used on CNG-powered vehicles in North America Green bordered white diamond symbol used on CNG-powered vehicles in China Compressed natural gas (CNG) (Methane stored at high pressure) can be used in place of gasoline (petrol), Diesel fuel and propane/LPG. 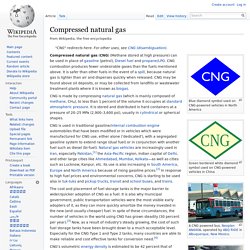 CNG combustion produces fewer undesirable gases than the fuels mentioned above. It is safer than other fuels in the event of a spill, because natural gas is lighter than air and disperses quickly when released. CNG may be found above oil deposits, or may be collected from landfills or wastewater treatment plants where it is known as biogas. CNG is made by compressing natural gas (which is mainly composed of methane, CH4), to less than 1 percent of the volume it occupies at standard atmospheric pressure. The cost and placement of fuel storage tanks is the major barrier to wider/quicker adoption of CNG as a fuel. Uses[edit] Cars[edit] CNG pumps at a Brazilian gasoline fueling station.

LPG (Liquefied petroleum gas) - What is it? - Explain that Stuff. By Chris Woodford. 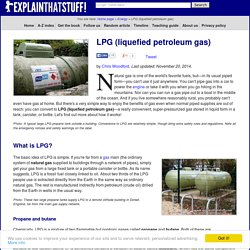 Last updated: November 20, 2014. Natural gas is one of the world's favorite fuels, but—in its usual piped form—you can't use it just anywhere. You can't pipe gas into a car to power the engine or take it with you when you go hiking in the mountains. Nor can you can run a gas pipe out to a boat in the middle of the ocean. And if you live somewhere reasonably rural, you probably can't even have gas at home.

Photo: A typical large LPG propane tank outside a building. What is LPG? The basic idea of LPG is simple. Photo: These two large propane tanks supply LPG to a remote cliffside building in Dorset, England, far from the main gas supply network. What is LPG? LPG is also important for use in industrial, commercial, agricultural, horticultural and manufacturing applications. 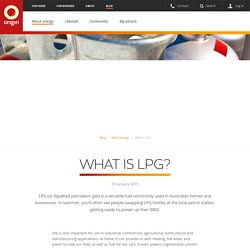 At home, it can provide us with heating, hot water and power to cook our food, as well as fuel for our cars. It even powers cogeneration plants! But what’s in it? In Australia, LPG is propane gas, but overseas it can also be a mix of propane and butane gas. For those scientifically minded, propane (C3H8) contains three carbon atoms and eight hydrogen atoms. Simply put, this means propane works well in cold weather, but butane isn’t as effective.