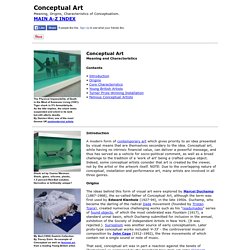 The following year Klein asserted that his paintings were now invisible and demonstrated this fact by exhibiting an empty room (Le Vide, the Void) - an early example of Installation art. (See also: Yves Klein's Postmodernist art 1956-62.) Another of his conceptualist arrangements (1962), involved the sale of his 'pictorial sensitivity' (not defined) in exchange for gold.

Stanley Brouwn, famous for his artistic declaration in 1960 that all shoe shops in Amsterdam comprised an exhibition of his work. Piero Manzoni, who in 1961 scandalized the art world by exhibiting cans of his own feces. Christo and Jeanne Claude Javacheff (b.1935), the Bulgarian sculptor and conceptualist, famous for his 1962 work entitled Iron Curtain.

Pop Art: History, Characteristics. Robert Indiana (b.1928) Born Robert Clark, he began as an abstract painter and wood sculptor before joining the pop art movement in New York City in 1954. 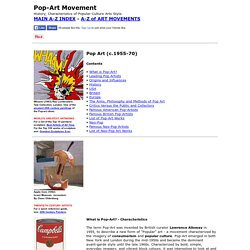 Discarded stencils led him to explore a range of word art by putting letters and words (eg. Love, Eat, Die) in his paintings which were based on the decor of pinball machines. He called himself the "American painter of signs. " He is best known for his 1960s graphic image "Love", which first appeared on Christmas cards and stamps. Jasper Johns (b.1930) Together with Rauschenberg, Johns was an early pioneer of Pop-art during the 1950s. Alex Katz (b.1927) A unique figurative painter, though he has also worked in printmaking and sculpture, Katz was associated with the Pop art due to his reworking of traditional themes in a Pop idiom. Roy Fox Lichtenstein (1923-97) A leading Pop-artist with an instantly recognizable style, his works turned comic-strip graphics into an international art form. Claes Oldenburg (b.1929) James Rosenquist (b.1933) Photorealism Contemporary Art: Definition, Types.

Origins and History Photographic realism emerged in the 1960s as a style of American art, in sharp contrast to intellectual contemporary art movements like Abstract Expressionism and Minimalism. 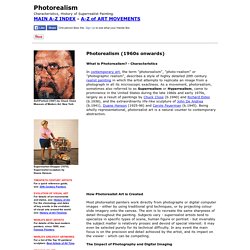 Although nominally a type of "realism", photorealism was not a successor to earlier types of American realism practised by the likes of Winslow Homer (1836-1910) and Edward Hopper (1882-1967). Instead, it was closer to Pop-Art, whose banal but instantly recognizable imagery it shared. However photorealism has none of Pop-Art's whimsical humour: rather it tends to be ultra impersonal, and its meticulous but indiscriminate detail can actually produce a sense of unreality. Thus whereas Pop artists sought to highlight the absurdity of much of the media imagery relied upon by the Consumer Society, photorealist painters and sculptors aim to celebrate the integrity and value of an image. Famous Photorealist Artists.

Brian Duffy (photographer) Brian Duffy was born to Irish parents in London in 1933. 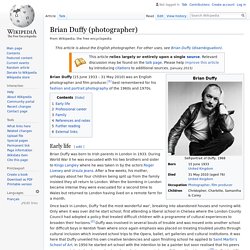 During World War II he was evacuated with his two brothers and sister to Kings Langley where he was taken in by the actors Roger Livesey and Ursula Jeans. After a few weeks, his mother, unhappy about her four children being split up from the family insisted they all return to London. When the bombing in London became intense they were evacuated for a second time to Wales but returned to London having lived on a remote farm for a month.

In 1957 Duffy was hired by British Vogue working under art director John Parsons where he remained working until 1963. During this time he worked closely with top models Jean Shrimpton (who he introduced to David Bailey), Paulene Stone, Joy Weston, Jennifer Hocking and Judy Dent. "Before 1960, a fashion photographer was tall, thin and camp. Duffy died on 31 May 2010, after suffering from the degenerative lung disease pulmonary fibrosis. Duffy married June when he was twenty one years old. Benson & Hedges Advert by Brian Duffy - Iconic Photograph. Brian Duffyu2019s beautifully crafted and surreal images for Benson & Hedges were a landmark in advertising photography, writes David Clark Image: Brian Duffy’s image, ‘Birdcage, Benson & Hedges advertisement’ was the second of four shot for the B&H advertising campaign © DUFFY ARCHIVE When the influential advertising agency Collett Dickenson Pearce (CDP) was asked to produce a campaign for Benson & Hedges cigarettes in 1977, the company chose Brian Duffy, one of the most high-profile photographers of the period. 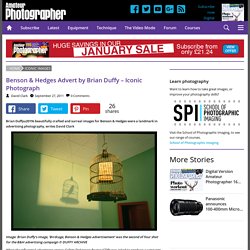 Duffy was part of the new generation of photographers that emerged in the late 1950s and early ’60s. Together with friends David Bailey and Terence Donovan – a gifted and outspoken trio Norman Parkinson called ‘The Black Trinity’ – he had created a fresh, informal style of fashion and portrait photography that helped define the era. He was strong-minded, opinionated and known as being ‘difficult’ to work with. ‘It was a very simple set,’ Chris continues.