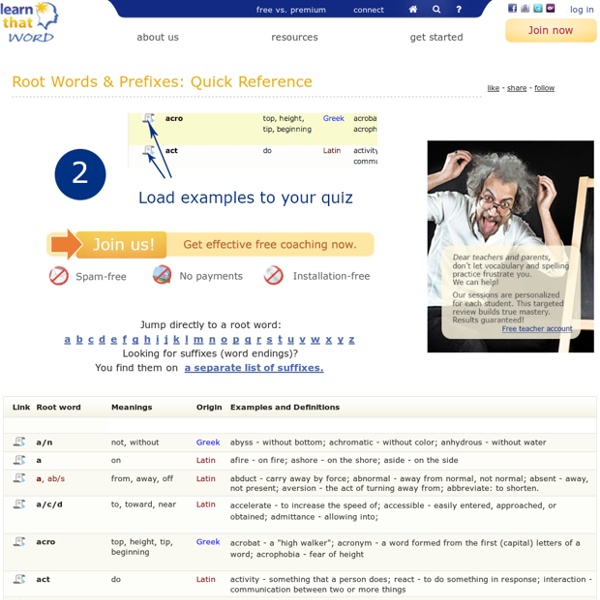 Suffix mania! Long list of suffixes, incl. meaning, word lists, examples, Our suffix word lists are the second part of our comprehensive root word tables: Suffixes are word endings that add a certain meaning to the word. Click on the icon to the left and add the suffix list to your LearnThatWord profile for personalized review. If you don't have an account yet, you can start one in a few seconds. Etymology Etymology Etymology is the scientific study of the origin of words. This etymological study improves your vocabulary. The strong vocabulary gives you • a more challenging and rewarding job. • greater self-confidence in speaking and in writing.

Spearmint and Rosemary Extracts Improve Memory Rosemary for remembrance – at least that’s what the Victorian language of flowers says. Now a small study has added weight to that folklore by showing that chemicals in the essential oils of rosemary and spearmint improve learning and memory. Researchers at the University of St Louis found that the higher dose of an antioxidant extract of compounds derived from rosemary was the most powerful in improving memory and learning in animals across three tested behaviours. West African Folk-Tales by William H. Barker and Cecilia Sinclair How We Got the Name "Spider Tales" IN the olden days all the stories which men told were stories of Nyankupon, the chief of the gods. Spider, who was very conceited, wanted the stories to be told about him. Accordingly, one day he went to Nyankupon and asked that, in future, all tales told by men might be Anansi stories, instead of Nyankupon stories. Nyankupon agreed, on one condition.

List of Greek and Latin roots in English Some of those used in medicine and medical terminology are not listed here but instead in Wikipedia's List of medical roots, suffixes and prefixes. A[edit] B[edit] C[edit] D[edit] E[edit] Word formation I always loved the word formation part of the FCE test. This was the part of the test where I always scored really high. However, some of my students don’t. So I sat down and tried to find out why I have been so successful in this part of the test.

Reading Literature Makes Us Smarter and Nicer Gregory Currie, a professor of philosophy at the University of Nottingham, recently argued in the New York Times that we ought not to claim that literature improves us as people, because there is no “compelling evidence that suggests that people are morally or socially better for reading Tolstoy” or other great books. Actually, there is such evidence. Raymond Mar, a psychologist at York University in Canada, and Keith Oatley, a professor emeritus of cognitive psychology at the University of Toronto, reported in studies published in 2006 and 2009 that individuals who often read fiction appear to be better able to understand other people, empathize with them and view the world from their perspective. This link persisted even after the researchers factored in the possibility that more empathetic individuals might choose to read more novels.

Identifying Characteristics - Anansi, the Spider Students watch a video featuring a storyteller who tells a Pourquoi story about Anansi, the Spider, a popular character in African folklore. Following the video, students identify the specific charactertraits of Anansi by completing a character web. Identifying character traits helps students learn and know more about a subject in fictional, non-fictional and visual text. Applying and assigning characteristics can help students develop characters in their own writing. Finally, being able to identify characteristics helps students to better understand how authors treat characters and subjects in a wide range of writing.

Oxford Dictionary of Word Origins "A treasure (from the Greek ‘thesauros’, treasure, store or storehouse) trove (past participle of an Anglo-Norman verb meaning ‘to find’) of verbal wonders" – William Hartston, Daily Express Combining both accessibility and authority, The Oxford Dictionary of Word Origins describes the origins and development of over 3,000 words and phrases in the English language. The book draws on Oxford's unrivalled dictionary research programme and language monitoring, and relates the fascinating stories behind many of our most curious terms and expressions in order to offer the reader a much more explicit account than can be found in a general English dictionary. Organized A-Z, the entries include first known use along with examples that illustrate the many faces of the particular word or phrase, from ‘handsome’ to ‘bachelor’ and ‘cute’ to ‘baby’, from ‘pagan’ to ‘palaver’ and ‘toff’ to ‘torpedo’.