How being called smart can actually make you stupid 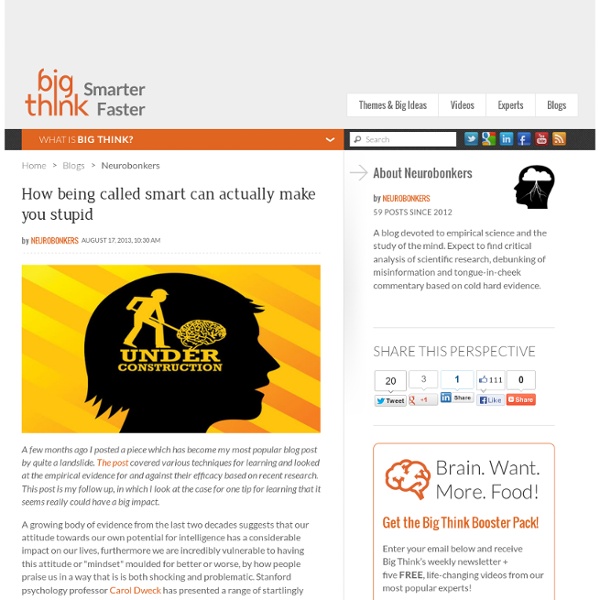 A few months ago I posted a piece which has become my most popular blog post by quite a landslide. The post covered various techniques for learning and looked at the empirical evidence for and against their efficacy based on recent research. This post is my follow up, in which I look at the case for one tip for learning that it seems really could have a big impact. A growing body of evidence from the last two decades suggests that our attitude towards our own potential for intelligence has a considerable impact on our lives, furthermore we are incredibly vulnerable to having this attitude or "mindset" moulded for better or worse, by how people praise us in a way that is both shocking and problematic. Stanford psychology professor Carol Dweck has presented a range of startlingly fascinating findings on the topic which have been broadly supported by further research. References: Blackwell L.S., Trzesniewski K.H. & Dweck C.S. (2007). Kamins M.L. & Dweck C.S. (1999).

The intellectual and psychosocial nature of extreme giftedness Powell, P. & Haden, T. Roeper Review Volume 6, No. 3, pp. 131--133 February 1984 This article by Philip Powell and Tony Haden compares the differences of average, moderately and extremely gifted individuals. The authors explore the psychological difficulties of the highly gifted, especially in terms of self-esteem and self-conception. The article discusses the difficulties the extremely gifted have in obtaining consistent, accurate and valid feedback in regard to their self-concept. The information provided has implications for educators, parents, and psychologists.

How your brain likes to be treated at revision time If you're a student, you rely on one brain function above all others: memory. These days, we understand more about the structure of memory than we ever have before, so we can find the best techniques for training your brain to hang on to as much information as possible. The process depends on the brain's neuroplasticity, its ability to reorganise itself throughout your life by breaking and forming new connections between its billions of cells. How does it work? Information is transmitted by brain cells called neurons. Higher social class predicts increased unethical behavior Author Affiliations Edited* by Richard E. Nisbett, University of Michigan, Ann Arbor, MI, and approved January 26, 2012 (received for review November 8, 2011) Abstract Seven studies using experimental and naturalistic methods reveal that upper-class individuals behave more unethically than lower-class individuals.

9 Overlooked Technologies That Could Transform The World What I've noticed is that most people don't really pay attention to "science" news, unless it's something that they can see immediately. I think this is at least partially because of the amount of news that comes out daily - whatever we may think about the quality of news, there is just a flood of it, which makes picking out "interesting" items difficult. When I talk about (just for example) the idea of gene therapy, most people think that it is still complete science fiction, as opposed to a very near-term product that will be available. Of course, CSP has been around for years, so it isn't really "new" to the average person. What they don't realize is the way that efficiencies have improved... And electronic currency is still in the "only oddballs use it" phase - people are aware of it, but mostly because of the issues bitcoin has had in the recent past.

heimer's Association - What is Alzheimer's Alzheimer's and dementia basics Alzheimer's is the most common form of dementia, a general term for memory loss and other intellectual abilities serious enough to interfere with daily life. Alzheimer's disease accounts for 60 to 80 percent of dementia cases. Learn more: What We Know Today and Understanding Dementia. Get our weekly e-newsletter 5 Psychological Experiments That Reveal Our Dark Side We present you the most notorious and most popular experiments of all-time. Some of the most fascinating and deplorable experiments ever conducted that proove that we do have a dark side… During the 1950s, Solomon Asch conducted and published a series of laboratory experiments that demonstrated the degree to which an individual’s own opinions are influenced by those of a majority group. Male college students participated in a simple “perceptual” task. In reality, all but one of the participants were “confederates” (i.e., actors), and the true focus of the study was about how the remaining student (i.e., the real participant) would react to the confederates’ behavior.

How The Memory Works In Learning How The Memory Works In Learning By Dr. Judy Willis, M.D., M.Ed. Teachers are the caretakers of the development of students’ highest brain during the years of its most extensive changes. As such, they have the privilege and opportunity to influence the quality and quantity of neuronal and connective pathways so all children leave school with their brains optimized for future success. This introduction to the basics of the neuroscience of learning includes information that should be included in all teacher education programs.

Orangutans plan their future route and communicate it to others Male orangutans plan their travel route up to one day in advance and communicate it to other members of their species. In order to attract females and repel male rivals, they call in the direction in which they are going to travel. Anthropologists at the University of Zurich have found that not only captive, but also wild-living orangutans make use of their planning ability. For a long time it was thought that only humans had the ability to anticipate future actions, whereas animals are caught in the here and now. But in recent years, clever experiments with great apes in zoos have shown that they do remember past events and can plan for their future needs.

7 Scientific Reasons a Zombie Outbreak Would Fail (Quickly) They Can't Take the Heat It's generally accepted by zombie experts that they're going to continue to rot, even as they shamble around the streets. What the movies fail to convey, however, is the gruesome yet strangely hilarious effect the hot sun has on a rotting corpse.

Learning Disability and ADD Myths LD and ADD Myths Click Home Myth #1 People with LD and ADD are not very smart. Nicholas Humphrey:THE EVOLVED SELF-MANAGEMENT SYSTEM I realized it must be the result of a trick that has been played by human culture. The trick isto persuade sick people that they have a "license" to get better, because they'rein the hands of supposed specialists who know what's best for them and can offer practical help and reinforcements. And the reason this works is that it reassures people—subconsciously —that the costs of self-cure will be affordable and that it's safe to let down their guard. So health has improved because of a cultural subterfuge. Science, Creativity and the Real World Gifted Homeschoolers Forum Science, Creativity and the Real World: Lessons Learned from the U.S. Homeschool Community By Corin Barsily Goodwin and Mika Gustavson, MFT A great deal of concern surrounds the lack of quality in science education in the United States.

Water-shedding surfaces can be made to last Steam condensation is key to the worldwide production of electricity and clean water: It is part of the power cycle that drives 85 percent of all electricity-generating plants and about half of all desalination plants globally, according to the United Nations and International Energy Agency. So anything that improves the efficiency of this process could have enormous impact on global energy use. Now, a team of researchers at MIT says they have found a way to do just that. It has been known for years that making steam-condenser surfaces hydrophobic—that is, getting them to repel water—could improve the efficiency of condensation by causing the water to quickly form droplets. But most hydrophobic materials have limited durability, especially in steamy industrial settings.

7 of the Weirdest Human Enigmas MOST KIDS love reading the color funny papers on Sundays. As a kid, one of my favorite strips was "Ripley's Believe It or Not." It always featured some fantastic facts or coincidences.