Table of similar systems of comparison of temperaments 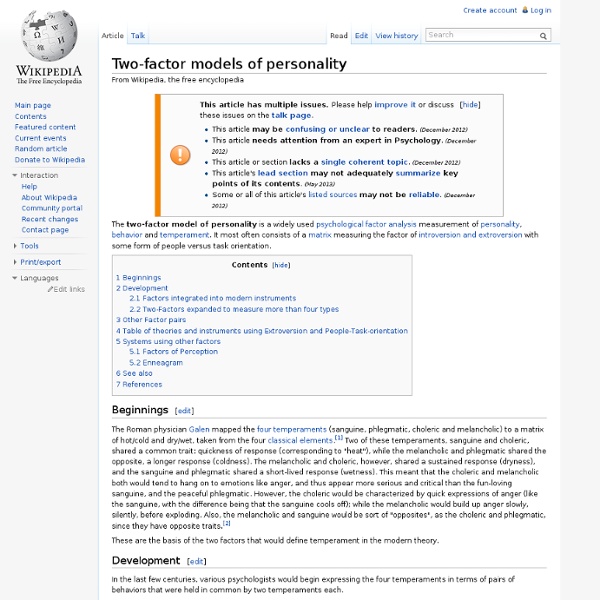 Beginnings[edit] The Roman physician Galen mapped the four temperaments (sanguine, phlegmatic, choleric and melancholic) to a matrix of hot/cold and dry/wet, taken from the four classical elements.[1] Two of these temperaments, sanguine and choleric, shared a common trait: quickness of response (corresponding to "heat"), while the melancholic and phlegmatic shared the opposite, a longer response (coldness). The melancholic and choleric, however, shared a sustained response (dryness), and the sanguine and phlegmatic shared a short-lived response (wetness). This meant that the choleric and melancholic both would tend to hang on to emotions like anger, and thus appear more serious and critical than the fun-loving sanguine, and the peaceful phlegmatic. These are the basis of the two factors that would define temperament in the modern theory. Development[edit] This theory would also be extended to humans. These he compared to the choleric, phlegmatic, melancholic and sanguine respectively.[4]

16 Personality Factors The Sixteen Personality Factor Questionnaire (or 16PF),[1] is a multiple-choice personality questionnaire which was developed over several decades of research by Raymond B. Cattell, Maurice Tatsuoka and Herbert Eber. Beginning in the 1940s, Cattell used the new techniques of factor analysis (based on the correlation coefficient) in an attempt to try to discover and measure the source traits of human personality (Cattell, 1946)(Nevid, 2009).[2][3] The questionnaire measures the 16 primary traits, and the Big Five secondary traits,[4][5] which have become popularized by other authors in recent years. From early in his research, Cattell found that the structure of personality was multi-level and hierarchical, with a structure of interdependent primary and secondary level traits (Cattell, 1946, 1957).[2][6] The sixteen primary factors were a result of factor-analyzing hundreds of measures of everyday behaviors to find the fundamental traits behind them. Outline of Test[edit]

Personality type This article is about the generic aspects of type theory. For the book by Jung, see Psychological Types. Clinically effective personality typologies[edit] Effective personality typologies reveal and increase knowledge and understanding of individuals, as opposed to diminishing knowledge and understanding as occurs in the case of stereotyping. Types vs. traits[edit] The term type has not been used consistently in psychology and has become the source of some confusion. Type theories[edit] An early form of personality type theory was the Four Temperaments system of Galen, based on the four humours model of Hippocrates; an extended Five Temperaments system based on the classical theory was published in 1958.One example of personality types is Type A and Type B personality theory. Carl Jung[edit] One of the more influential ideas originated in the theoretical work of Carl Jung as published in the book Psychological Types. Four functions of consciousness[edit] Dominant function[edit] See also[edit]

Myers-Briggs Type Indicator Model of personality types A chart with descriptions of each Myers–Briggs personality type and the four dichotomies central to the theory The Myers–Briggs Type Indicator (MBTI) is an introspective self-report questionnaire indicating differing psychological preferences in how people perceive the world and make decisions.[1][2][3] The original versions of the MBTI were constructed by two Americans, Katharine Cook Briggs and her daughter Isabel Briggs Myers.[4] The MBTI is based on the conceptual theory proposed by Swiss psychiatrist Carl Jung,[5] who had speculated that people experience the world using four principal psychological functions – sensation, intuition, feeling, and thinking – and that one of these four functions is dominant for a person most of the time.[6] The four categories are Introversion/Extraversion, Sensing/Intuition, Thinking/Feeling, Judging/Perception. History[edit] Katharine Cook Briggs began her research into personality in 1917. Differences from Jung[edit]