Levels and Types of Data

On Likert scales, ordinal data and mean values - Achilleas Kostoulas. This post has been prompted by an edited collection that I was recently asked to review. 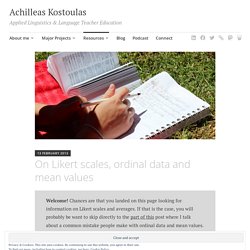 Substantive comments on the book will be published elsewhere, so you may want to watch this space for updates; but what I want to do in this post, instead, is share some thoughts regarding research methods and the role of reviewers. Specifically, what sparked my interest was one study in the collection, which used Likert scales to record participants’ attitudes towards a certain educational construct. Those who are not familiar with the fascinating minutiae of quantitative research can find a discussion of Likert scaling and ordinal data in the section that immediately follows. Those of you who are unlucky enough to have studied statistics may want to skip to the next section. Likert scales and ordinal data A Likert-type question (or ‘item’) asks respondents to select one of several (usually four or five) responses that are ranked in order of strength.

Interpreting Likert scales The wrong way to do it. Analyzing and Interpreting Data From Likert-Type Scales. Questions and answers about language testing statistics: Likert items and scales of measurement? QUESTION: Many people have asked me this seemingly simple question: Are "Likert-scale" questions on questionnaires nominal, ordinal, interval, or ratio scales? 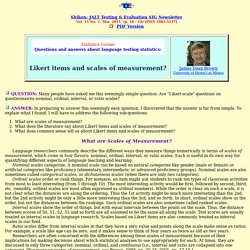 ANSWER: In preparing to answer this seemingly easy question, I discovered that the answer is far from simple. To explain what I found, I will have to address the following sub-questions: [ p. 10 ] [ p. 11 ] [ p. 12 ] Intro to measurement and statistics. 1.2 Variables and Measures. Social, Behavioral & Medical Sciences Statistical Analysis » Peter Flom’s Statistics 101: Nominal, ordinal, interval, ratio: Stevens’ typology and some problems with it.

The nominal ordinal interval ratio scheme Stevens (Stevens 1946) divided types of variables into four categories, and these have become entrenched in the literature. 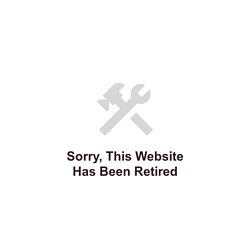 The levels are nominal, ordinal, interval and ratio. To fully understand these, you have to use the same methods that Stevens used, which involve permissible transformations. However, it will be clearer to first describe each level more casually. Nominal responses Nominal comes from the Latin for ‘name’ and nominal variables are those that are simply names – they have no order. Examples are hair color or religion. 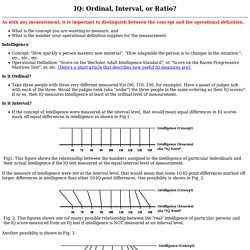 One possibility is shown in Fig. 2. Another possiblity is shown in Fig. 3. There's pretty strong evidence that IQs don't measure at the interval level of measurement Take 4 people with IQs of 130, 120, 90, and 80. Talk with them. Based on your experiences, do you think Fig. 2, Fig. 3, or another Figure best describes the relationship between IQ scores and the person's underlying intelliegence. E-Source for OBSSR. Exercise 2 In this exercise, you are asked to decide which level of measurement of correct (Nominal, Ordinal, Interval, or Ratio) for each example. 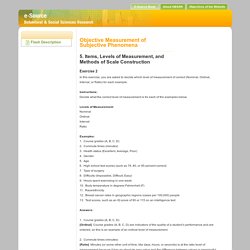 Instructions: Decide what the correct level of measurement is for each of the examples below. ScalesOfMeasurement. Nominal, ordinal, interval, & ratio data. Last changed 17 Jan 2017 .............. 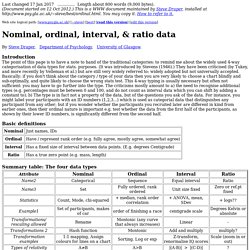 Length about 800 words (9,000 bytes). (Document started on 12 Oct 2012.) This is a WWW document maintained by Steve Draper, installed at You may copy it. How to refer to it. Web site logical path: [www.psy.gla.ac.uk] [~steve] [best] [read this version] [edit this version] In Chapter 01: Psychology and Science. To test an idea, one must gather data. 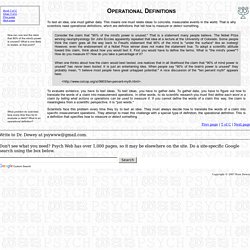 " When one thinks about how the claim would best tested, one realizes that in all likelihood the claim that "90% of mind power is unused" has never been tested. < OPERATIONAL DEFINITIONS. To return to the exercise , close this browser window. 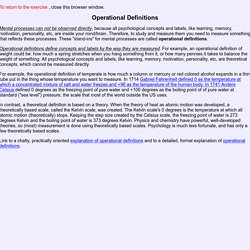 Mental processes can not be observed directly, because all psychological concepts and labels, like learning, memory, motivation, personality, etc, are inside your mind/brain. Therefore, to study and measure them you need to measure something that reflects these processes. These "stand-ins" for mental processes are called operational definitions. Operational definitions define concepts and labels by the way they are measured. For example, an operational definition of weight could be: how much a spring stretches when you hang something from it, or how many pennies it takes to balance the weight of something. For example, the operational definition of temperate is how much a column or mercury or red colored alcohol expands in a thin tube put in the thing whose temperature you want to measure. In contrast, a theoretical definition is based on a theory. FAQ 1089 - What is the difference between ordinal, interval and ratio variables? Why should I care?

Many statistics books begin by defining the different kinds of variables you might want to analyze. This scheme was developed by Stevens and published in 1946. A categorical variable, also called a nominal variable, is for mutual exclusive, but not ordered, categories. For example, your study might compare five different genotypes. You can code the five genotypes with numbers if you want, but the order is arbitrary and any calculations (for example, computing an average) would be meaningless. A ordinal variable, is one where the order matters but not the difference between values. Does it matter? Does it matter for data analysis? Levels of Measurement. « PreviousHomeNext » The level of measurement refers to the relationship among the values that are assigned to the attributes for a variable. 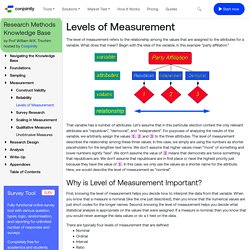 What does that mean? Begin with the idea of the variable, in this example "party affiliation. " That variable has a number of attributes. Let's assume that in this particular election context the only relevant attributes are "republican", "democrat", and "independent". Nominal, ordinal, interval, & ratio data. Understanding the different types of variable in statistics. All experiments examine some kind of variable(s). 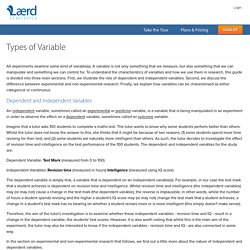 A variable is not only something that we measure, but also something that we can manipulate and something we can control for. To understand the characteristics of variables and how we use them in research, this guide is divided into three main sections. First, we illustrate the role of dependent and independent variables. Second, we discuss the difference between experimental and non-experimental research.

Social, Behavioral & Medical Sciences Statistical Analysis » Peter Flom’s Statistics 101: Nominal, ordinal, interval, ratio: Stevens’ typology and some problems with it. Learn and Teach Statistics and Operations Research. <a href=" Our Poll</a> Untitled. UsableStats: Nominal, Ordinal, Interval and Ratio. You might have heard of the sequence of terms to describe data : Nominal, Ordinal, Interval and Ratio. They were used quite extensively but have begun to fall out of favor.

These terms are used to describe types of data and by some to dictate the appropriate statistical test to use. Most statistical text books still use this hierarchy so students generally end up needing to know them. Who Cares? Where did this all come from you ask and why do we care? One of the more famous articles showing the fallacy of such rigid thinking was by an eminent statistician named Lord who in his article: "On the statistical Treatment of Football Numbers" showed how the means of nominal data can be meaningful too!

The POWERMUTT Project. Introduction When data are prepared for analysis by computer, values of variables are usually entered as numbers. Sometimes such coding is natural — for example, the population of a country or the number of votes received by a candidate. Sometimes, artificial numerical codes are created for convenience of processing. In a file containing data on members of the U.S. How Many Sexes Are There? PROVIDENCE, R.I.— Western culture is committed to the idea that there are only two sexes. For the situations described in this essay, I have to invent conventions -- s/he and his/her -- to denote someone who is neither male nor female or who is perhaps both sexes at once. Nature and Sex Redefined - we have never been binary.