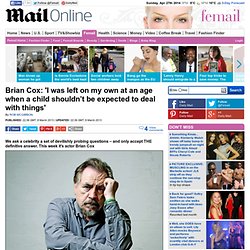 This week it’s actor Brian Cox We ask a celebrity a set of devilishly probing questions - and only accept THE definitive answer. This week it's actor Brian Cox The prized possession you value above all others… A little statue of Ganesh, the Hindu elephant god. The unqualified regret you wish you could amend… About 15 years ago I was disparaging about another actor to a woman and told her he was no good for a certain role.

The way you would spend your fantasy 24 hours, with no travel restrictions… I would need a day of calmness. The temptation you wish you could resist… Sweets and desserts, especially big puddings like baked Alaska. The book that holds an everlasting resonance… In Search Of The Miraculous by Russian writer Peter Ouspensky. The pet hate that makes your hackles rise... As told to Rob McGibbon. Brian Cox, interview for Bob Servant: 'Young people don’t have the opportunities I had’ Brian Cox: Acting is 'cutting itself off' from working class society. Brian Cox : Actor - Films, episodes and roles. Brian Cox. Nicholas and Alexandra. Nicholas and Alexandra (1971. Manhunter (film)

Opening to mixed reviews, Manhunter fared poorly at the box office at the time of its release, making only $8.6 million in the United States. 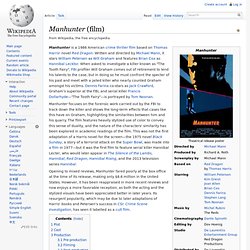 However, it has been reappraised in more recent reviews and now enjoys a more favorable reception, as both the acting and the stylized visuals have been appreciated better in later years. Its resurgent popularity, which may be due to later adaptations of Harris' books and Petersen's success in CSI: Crime Scene Investigation, has seen it labelled as a cult film. Having found the killer's fingerprints, Graham meets with Crawford.

They are accosted by tabloid journalist Freddy Lounds (Stephen Lang), with whom Graham has a bitter history. Lounds' paper had run photographs of Graham taken secretly while he was hospitalized. Graham travels to the first crime scene in Birmingham, Alabama, where he is contacted by Crawford, who tells him of Lounds' tabloid story on the case. "I was really wound up. Manhunter (1986. Rob Roy (film) From Wikipedia, the free encyclopedia Rob Roy may refer to: Other people[edit] Places[edit] Rob Roy, Indiana, a small town in Fountain County, Indiana, USRob Roy, Victoria, a district of the town of Christmas Hills, Victoria, AustraliaRob Roy Island, an island in the Solomon IslandsRob Roy Way, a long distance footpath in Scotland. 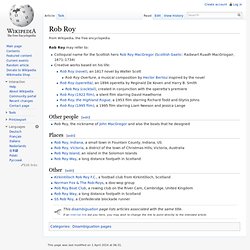 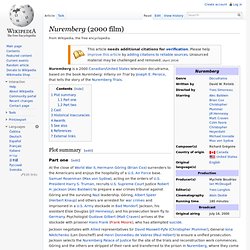 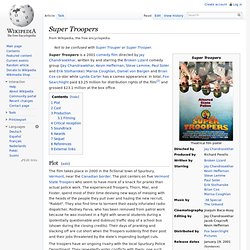 The plot centers on five Vermont State Troopers who seem to have more of a knack for pranks than actual police work. The experienced Troopers, Thorn, Mac, and Foster, spend most of their time devising new ways of messing with the heads of the people they pull over and hazing the new recruit, "Rabbit". They also find time to torment their easily infuriated radio dispatcher, Rodney Farva, who has been removed from patrol work because he was involved in a fight with several students during a (potentially questionable and dubious) traffic stop of a school bus (shown during the closing credits). Their days of pranking and slacking off are cut short when the Troopers suddenly find their post and their jobs threatened by the state's impending budget cuts. The now-unemployed troopers learn that it was Farva, not Ursula, who informed Grady in exchange for a transfer to the local police.

Super Troopers (2001. L.I.E. Plot[edit] Howie Blitzer is deeply affected by the death of his mother in a car accident on the Long Island Expressway. 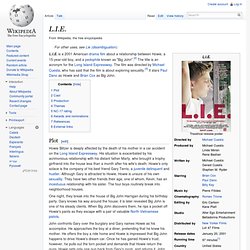 His situation is exacerbated by his acrimonious relationship with his distant father Marty, who brought a trophy girlfriend into the house less than a month after his wife's death. L.I.E. (2001. Adaptation (film) Though the film is billed as an adaptation of The Orchid Thief, its primary narrative focus is Charlie Kaufman's struggle to adapt The Orchid Thief into a film, while dramatizing the events of the book in parallel. 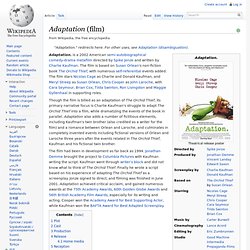 Adaptation also adds a number of fictitious elements, including Kaufman's twin brother (also credited as a writer for the film) and a romance between Orlean and Laroche, and culminates in completely invented events including fictional versions of Orlean and Laroche three years after the events related in The Orchid Thief, Kaufman and his fictional twin brother. The film had been in development as far back as 1994. Jonathan Demme brought the project to Columbia Pictures with Kaufman writing the script. Kaufman went through writer's block and did not know what to think of The Orchid Thief. Adaptation. (2002. Troy (film) Troy is a 2004 British-Maltese epic war film written by David Benioff and directed by Wolfgang Petersen. 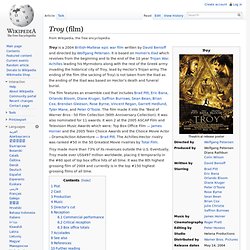 It is based on Homer's Iliad which revolves from the beginning and to the end of the 10 year Trojan War. Achilles leading his Myrmidons along with the rest of the Greek army invading the historical city of Troy, lead by Hector's Trojan army. The ending of the film (the sacking of Troy) is not taken from the Iliad as the ending of the Iliad was based on Hector's death and funeral burial. Troy made more than 73% of its revenues outside the U.S. Eventually, Troy made over US$497 million worldwide, placing it temporarily in the #60 spot of top box office hits of all time.

Odysseus, king of Ithaca visits Phtia to persuade Achilles to fight, even suggesting that he fight for him instead of Agamemnon. In Troy, King Priam (Peter O'Toole) is dismayed when Paris brings Helen home but welcomes her as a guest. Troy (2004. Rise of the Planet of the Apes. Plot[edit] Will Rodman (James Franco), a scientist at biotechnology company Gen-Sys, is testing viral-based drug ALZ-112 on chimpanzees to find a cure for brain ailments such as Alzheimer's disease. The drug is given to a chimpanzee, Bright Eyes, greatly increasing her intelligence, but she is forced from her cage, goes on a rampage, and is killed.

Will's boss Steven Jacobs (David Oyelowo) terminates the project and orders chimp handler Robert Franklin (Tyler Labine) to euthanize the chimps. After doing as ordered, Franklin discovers that Bright Eyes had recently given birth and convinces Will to save the baby chimp's life by taking him home temporarily. Will's father Charles (John Lithgow), who is suffering from Alzheimer's disease, names the chimp "Caesar". After five more years and upon seeing a dog on a leash like his own, Caesar (now an adolescent) openly questions his identity and Will tells him of his origins. Cast[edit] Humans[edit] Apes[edit] Rise of the Planet of the Apes (2011.